I Heart my In-Laws. What is Wrong With me? 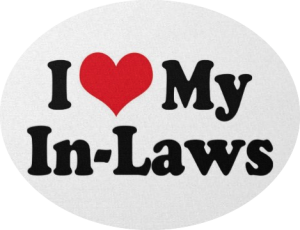 As the year begins, many of us find ourselves feeling as if we need to detox after the holidays. I am not talking about cleansing ourselves of the festive food and drinks in which we indulged (or maybe over-indulged). I am referring to the process of removing the toxins that have accumulated in our hearts and minds from extended time spent with family, and especially in-laws.

In a pre-holiday article, in The Boston Globe, Leon Neyfakh writes about the familiar image of “the monster-in-law” and reminds us that nothing seems to bring out our angst about our parents-in-laws like the holidays. For interfaith families, the season can feel especially toxic. Mix the navigation of different faiths and religious customs with regular seasonal stress, sprinkle a little Hanukkah-Christmas competition on top and what you get is a recipe for “holidays from hell.”

But it does not have to be this way. We just returned from Christmas in Vermont with my in-laws and the worst thing I can say about the trip is that my legs are a little sore from skiing.

I feel lucky. Neyfakh reports that more than 60 percent of married women experience sustained stress because of their parents-in-laws. But I love mine. What is wrong with me?

I would like to think that nothing is wrong with me; that my in-laws and I just happen to have found the ingredients for a successful relationship. That all these relationships need, is love.

The first time I met my in-laws, my mother-in-law wrapped me in an embrace as I entered her kitchen. The greeting was not over-the-top or staged. It radiated genuine warmth.

I was moved because I knew I was not the poster child for a future daughter-in-law. I was Jewish, not Christian; and my divorce from my first husband was still not finalized. Yet, my future in-laws greeted me with an air of acceptance.

My divorce would be official eventually; alleviating any concerns that my in-laws might have about my relationship status. But I was still Jewish. Yet, any worries that I had about the acceptance of my Jewishness were dispelled when I arrived for my first Christmas with the Larkins.

Hanging from the mantel with the family stockings was one in white wool with blue Stars of David. It was for me, and I appreciated that my mother-in-law found a way to include me in their holiday tradition while recognizing and respecting my faith.

The hug and the stocking laid the foundation for our relationship, and helped us to focus on our shared values, rather than on our theological differences. For example, we found that we both take our responsibility to help make the world a better place seriously.

Over the years, my in-laws have worked to care for elderly friends, feed the hungry (my father-in-law coordinates a summer lunch program for children and families in need), and help settle Sudanese refugees in the Burlington area (my mother-in-law has volunteered with the Vermont Refugee Resettlement Program). Their efforts embody Christian values, and from my Jewish perspective, are the very definitions of mitzvot and tikkun olam.

We also realized that we share similar religious experiences and points-of-view. We trade stories about our involvement as lay leaders in our respective houses of worship and find similarities in our liturgies.

My mother-in-law has mentioned that the Reform prayer book Mishkan T’filah reminds her of the one her church uses. And my father-in-law, a student of theology, has been a great resource for answering questions related to the Bible.

While we have found common ground and created inclusive celebrations, I know that my in-laws had hoped that their grandchildren would be baptized in the same church as Cameron and his sister. I know that they were disappointed when we announced that our children would be raised Jewish and realized that a baptism would not happen.

But I also know that they felt that giving a child a spiritual foundation, regardless of religious denomination, was more important than upholding a custom. Knowing that our children would be raised in a home with religion diminished any disappointment that they felt.

I know that my relationship with my in-laws, and their support and participation in our Jewish home have been made easier by the fact that we both affiliate with the theologically liberal brands of our faiths. I also know that focusing on each other’s good qualities, rather than each other’s imperfections has helped too.

This has been our recipe for success. Maybe it is unique. But I do not think so.

It may not be easy to get past criticism, prejudice, exclusion, and parental meddling in order to build good in-law relations; and fundamentalism and the perceived threat of new or different religious beliefs and traditions can add another layer of difficulty. But I do think that many other families can make it work.

I know more of us could “heart” our in-laws if we put the stereotypical behavioral scripts that popular culture holds up as the norm aside. By focusing on what unites us rather than what divides us more families might be able to enjoy emotionally intoxicating holidays in the years to come.