How My Atheist Husband Helps Celebrate the Jewish Holidays

Bill and I are approaching our eighth wedding anniversary. We have two small children, Samantha and Daniel. We are raising them Jewish, and we belong to a Conservative synagogue. Although Bill is a confirmed atheist, he identifies strongly with Jewish culture and over the years has gained a true appreciation for the importance of Jewish rituals and values. He has also learned a tremendous amount about Jewish customs and holidays and feels very comfortable explaining to people that we are a Jewish family. Happily for me, he has found many ways to comfortably participate and play an important role in our Jewish holidays and celebrations. 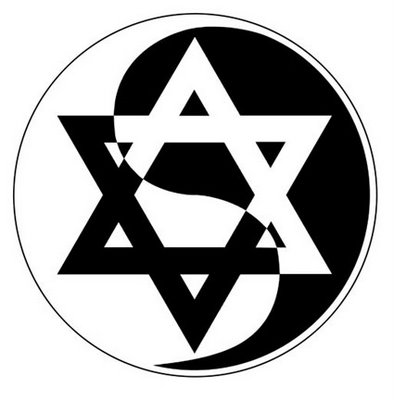 Bill and Staci’s different approaches balance out, like yin and yang.

When I was growing up, my parents always fasted on Yom Kippur, and as we children approached bar and bat mitzvah age, we were also encouraged to fast. I, however, have terrible will power and my fast doesn’t usually last the whole day. In fact, I was secretly relieved both times I was pregnant during Yom Kippur, since this granted me an automatic waiver from fasting. Bill, however, is a different story. He not only fasts every year, he enjoys the process and has no real difficulty going without food for a day. He even fasted on Yom Kippur before we were engaged or married. He fasts because he believes that cleansing one’s body is a wonderfully symbolic way to cleanse one’s mind and heart. As he reflects upon his actions over the past year and begins the new year with a clean slate, so has his body also been cleansed to begin anew.

Bill loves to build. He built our deck, he built us bookcases, and he finished our basement single-handedly. So as Sukkot (Jewish festival of booths) approaches each year, he eagerly asks, “May I build a sukkah (wooden hut Jews traditionally build to eat and/or sleep in during holiday of Sukkot)?” Killjoy that I am, in the past I have told him that it’s really not necessary. Sukkot was not a holiday my family celebrated while I was growing up, so I didn’t feel we needed to take it on. Also, although Bill always finishes his projects, his time estimates are always a bit off. Selfishly, I haven’t wanted to spend my weekends being a single mom while Bill pounds nails in the backyard.

Recently, though, our daughter Samantha asked if we could have a sukkah this year. I realized that if our children were showing an interest in a holiday, then we should nurture that interest. I also realized that Bill’s desire and ability to build a sukkah is his way of involving himself in the holiday and again, why wouldn’t I nurture that?

Before we had children, Bill and I always cooked together. We would get our monthly issue of Bon Appetit and try out different recipes. One year when we were living in Boston, we decided to host our own Passover seder (ritual meal). Bill and I did most of the cooking, preparing many of the Bon Appetit recipes, and having a wonderful time. We invited both Jewish and non-Jewish friends, many of whom still ask to be invited to our seder.

At Hanukkah each year, Bill is usually the one who makes our latkes (fried potato pancakes), and since we have had children, Bill is generally the one who prepares our contribution to my family’s Passover seder. When I reflect on my upbringing, my parents’ roles were very traditional. My father was our family’s Jewish educator and the leader of our seder. He took this responsibility very seriously and has been a true role model for me. My mother cooked and orchestrated delicious and beautifully presented meals at the holidays and for Shabbat (Sabbath) dinner. In my mind and in my heart, my mother’s contributions were no less important than my father’s. Food and meals are a crucial and significant part of all of our Jewish customs and celebrations. I feel strongly that when Bill cooks during our holidays, it is his way of participating, and it is a contribution that should be appreciated.

Almost every morning when our daughter wakes up, she asks if it is a workday for Daddy. Every Friday morning we happily remind her that when Daddy gets home from work, it will be Shabbat which of course means that then we will have two whole days of family time. Bill and I have been lighting Shabbat candles and enjoying a home-cooked Shabbat dinner together for many years now. In fact, to ensure that I not start our weekend with too many plans, Bill coined a phrase before we even had children, each week imploring me “not to break the sanctity of Shabbas” (the Yiddish word for Sabbath).

Now that we have children, this weekly custom has become even more important. Samantha and Daniel love to get the candles, sing the blessings and other Shabbat songs, and give kisses while we wish each other Shabbat Shalom (Hebrew for “a good and restful Sabbath”).