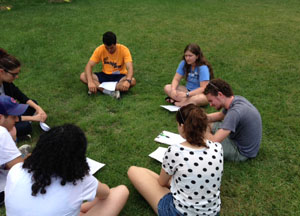 Everyone looked around and saw that nearly all of the more than 75 participants had taken a step inside the circle.

And so began InterfaithFamily/Philadelphia’s Sensitivity Training for counselors at Camp JRF (the Reconstructionist movement’s overnight camp in the Pennsylvania Poconos) for working with children from interfaith homes. This training—which I conducted along with my IFF/Philadelphia colleagues Wendy Armon and Robin Warsaw—was part of the camp’s Inclusivity Training for counselors in the week before campers arrived. It was clear to all of the counselors in attendance that being part of an interfaith family isn’t just a theoretical issue for liberal Jews today, it’s something that touches almost every one of us personally. 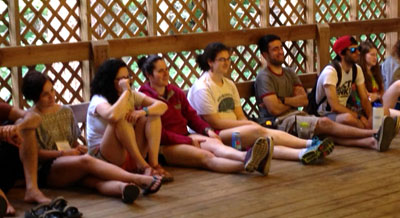 Over the next hour, we explored how the counselors could best handle various issues that might come up during the summer. For example, what do you do as a counselor when you’re leading a discussion about God and one of the campers brings up Jesus? The counselors also divided up into small groups and discussed and acted out various scenarios involving interfaith issues, such as how to react when a camper says that she is “half Jewish and half [another religion]” or when a camper claims that his bunkmate “isn’t really Jewish.”

I was amazed at the counselors’ thoughtfulness and sensitivity, their insight and creativity, and their openness to discussing challenging issues. After the training, the three of us from IFF/Philadelphia had the pleasure of joining the counselors for a healthy and delicious (really!) lunch—which was followed by a rousing song session in which the counselors sang some of the songs they’ve been learning in advance of the campers’ arrival. Then we were in for a real treat, as the camp’s director, Rabbi Isaac Saposnik, took us on a tour (by golf cart) of the camp. We saw how the different activity areas were labeled with signs that looked like Israeli street signs, naming the activity in Hebrew, English and Arabic. A highlight of the tour was the camp’s new Eco-Village (designed with the input of campers from the past year), a super cool area where campers entering their freshman and sophomore years of high school will live in yurts.

More than once throughout our day at Camp JRF, we heard someone use the camp expression “How We Be.” At Camp JRF, diversity isn’t just tolerated…it isn’t just accepted…it’s embraced! One thing was clear:  “We all be different…and that’s wonderful!” Camp JRF is very much a JEWISH camp, but every person at camp—counselor or camper—is encouraged to express his or her Judaism in a way that is personally meaningful. And each person understands that he or she has to respect how others “be.” There’s no “one size fits all.” Each individual is unique, and that makes for a vibrant camp community.

I have no doubt that the campers who attend Camp JRF this summer will have an amazing time. They’ll swim and play Frisbee; dance and sing; make new friends and have all kinds of exciting and rewarding experiences. If they’re going into ninth or tenth grade—they’ll even get to live in a yurt! But most important, they’ll know that they’re living in a community where their uniqueness is embraced and they are accepted for who they are, as they are. And THAT is a great way to “be.”

Can We Be Happier Parents?