How We Included Everyone in Our Jewish-Mexican Wedding 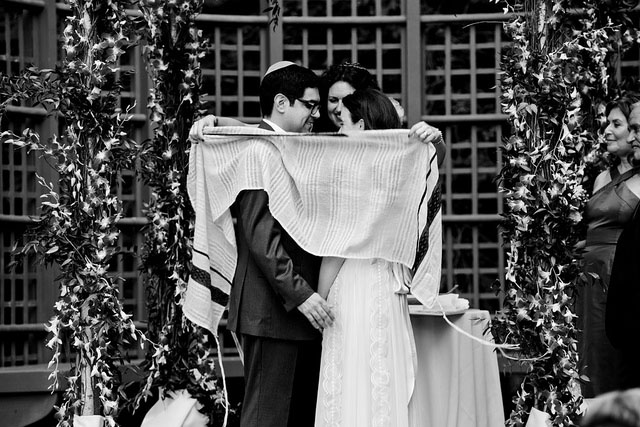 When José and I first started dating, my Jewish parents were not pleased. Though my mom is fairly liberal, some instinct flared up in her that has roots in centuries of Jewish fear of disappearance. Though that fear has lessened over the decades for many Jewish families, particularly in the U.S., it still rises up for many people, sometimes unexpectedly. What if my daughter loses her Jewish identity?, some parents wonder. What if the grandchildren aren’t raised Jewish? Is this the end of the line?

For me and many other Jews like me, this fear is unfounded. I went to Jewish day school from kindergarten through high school, and even went on to get a degree in Jewish philosophy. While my Jewish practices have changed over the years, I have always been a proud and engaged Jewish woman. I was, and remain, confident that my connection to Judaism is strong enough to share with my husband who is not Jewish and our future children.

The road to acceptance took a few years, but by the time we were ready to get engaged my parents had thankfully come around. They gave us their blessing, and we set out to create a wedding that reflected my Jewish heritage and José’s Mexican culture.

We had it fairly easy in that José does not identify with a particular religious tradition. He is a scientist and committed atheist; as a child he briefly attended a Baptist religious school in the small town in Baja where he was raised, but he definitively broke off with religion when he awakened to his atheism. While being an atheist, José has always supported and joined in with my Jewish practices. I’m not a believer either, but I love Jewish holidays, attending services and grappling with the big questions in life. Judaism is the lens through which I consider ethical dilemmas and the source of my commitment to social and environmental justice. These are things we’re able to share.

We found an amazing Reconstructionist rabbi, Rachel Weiss, of Congregation Beit Simchat Torah—the gay/lesbian synagogue in New York City—to officiate at our wedding. Aside from being open-minded and accepting, Rabbi Weiss also had the added bonus of being fluent in Spanish. She had previously worked with Mexican immigrants, and we felt she understood both of our backgrounds. 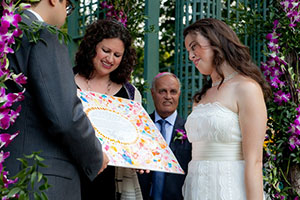 Together with Rabbi Weiss, we designed a ceremony that honored the dual heritage we were bringing together. We included traditional Jewish elements, including the chuppah (wedding canopy), the seven blessings, the circling of bride and groom, the ketubah (marriage contract) and the ring exchange. We wrote our own ketubah text instead of using the traditional text, and changed the language of the ring exchange and seven blessings to be more inclusive and universal. The witnesses who signed our ketubah included two of our close friends who happen to be another interfaith/intercultural couple—Jewish and Indian. We had watched them create a beautiful marriage that included both of their cultures, and were inspired by their example.

José’s grandmother was central to his upbringing, often standing in as a second parent since he didn’t have a father in his life, so we wanted to make sure she was included and would understand what was going on at the wedding. Since his grandmother doesn’t speak English, Rabbi Weiss explained each part of the ceremony before it was performed in both English and Spanish. José’s grandmother found the customs fascinating and listened intently as they were described. We also had traditional Mexican paper cutouts (papel picado) created for our wedding, which served as decoration at the entrance of the garden where the ceremony took place. 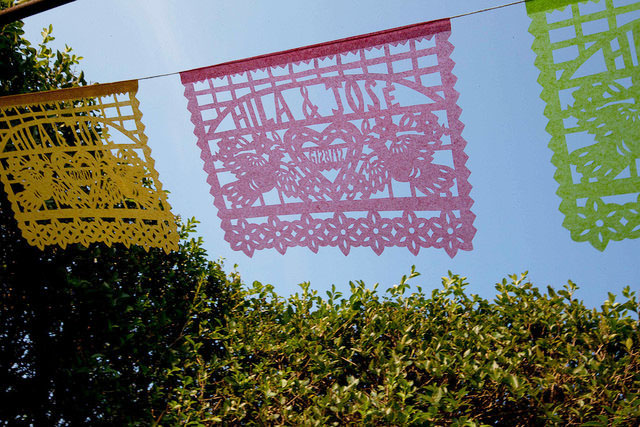 My own Jewish background is somewhat mixed, in that my mother is Ashkenazi and my father is Yemenite on his father’s side and Sephardic on his mother’s side. To honor my late grandmother, Rabbi Weiss sang a Jewish song in Ladino, the Judeo-Spanish language that my grandmother had spoken. This was another way to bridge our cultures, having a taste of the Spanish language woven into an ancient Jewish song. 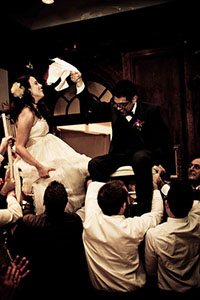 When it came to the reception, we just wanted to throw an awesome party. The raucous klezmer band Golem was essential to making that happen. The wedding took place in an art museum on Long Island, and since both José and I dabble in visual art, we made mini-paintings on mini-easels as souvenirs for our (very impressed) guests. We also brought a giant blank canvas and paints for guests to create a piece of collective artwork for us. The painting now hangs in our living room, reminding us of that incredible day.

During the reception, my mom gave a speech that chronicled her and my dad’s evolution in coming to accept and share the joy in our relationship. They had truly done a “180,” realizing over time that they had nothing to fear in my marrying “outside” the Jewish faith, and that I had found the life partner who was exactly right for me, and who they loved like a son. Now, three years later, I am pregnant, and we all can’t wait to bring another person into our crazy, mixed family. Among our plans for the baby: teaching it Hebrew, Spanish… and if there’s time, maybe even English.

Find an officiant for your wedding.