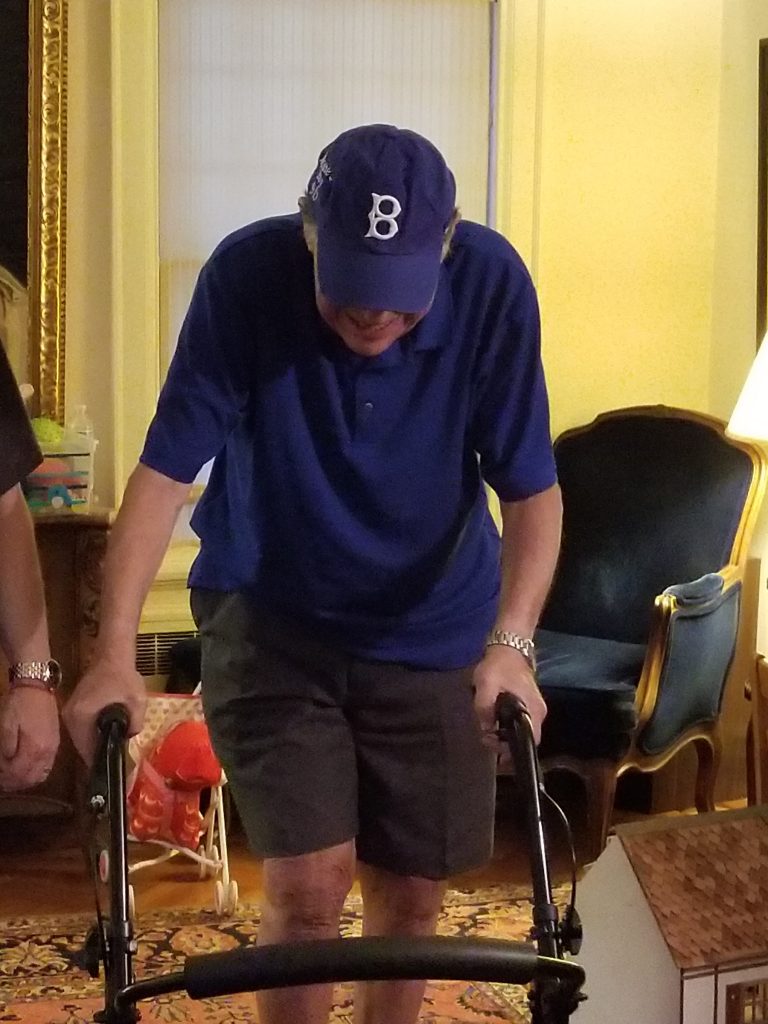 On August 3 my Uncle Jeff, my father’s brother, turned 90 years old. I received a call from my cousin in Canada, my uncle’s first daughter, telling me she wanted this year’s annual August birthday party to be a little different. “Do you think you could give us a nostalgic tour of Brooklyn?” she asked, “I will rent a bus with a microphone. Any chance I have to talk all day and be the center of attention I take, so of course I said yes.

My uncle grew up in the Crown Heights section of Brooklyn at 240 Crown Street. He was born in 1928 and the song on the radio the day he was born was a yodeling song by Jimmie Rogers called, “T-for Texas Blue Yodel #1.” My uncle married young, fought in Korea, celebrated every Jewish holiday, went to Crown Heights Yeshiva, prayed, studied, bought a house out on Long Island and lived in that house for 63 years with my aunt before they packed up and moved to an apartment New Jersey in order to be closer to their other daughter. How would I tell my uncle the history of his own life through the Brooklyn streets?

They were streets he hadn’t been to in over 50 years. How would I tell the story of a life so different from my own? Was I the one to tell it? I raise my daughters in such a different way than my uncle raised his own daughters. My family is an interfaith family: American Jewish on my side and Mexican Catholic on Adrian’s side. Yet, when I first got together with Adrian and decided to start a family, it was my uncle’s blessing I asked for, my father’s brother, the closest thing to my father’s blessing I could get. My uncle gave that blessing freely saying only “Mazal Tov” (the Hebrew words for congratulations). So, whether I was the best one to give the tour of Brooklyn, I didn’t know, but I was willing to do it to my best ability.

The bus arrived at my mother’s house in Midwood at noon on Sunday. There were 20 family members. I didn’t even know I had that much family. My brother brought my 3-year-old nephews and his wife, I brought my almost 3-year-old Helen and hired a baby nurse for my little Alma, but unfortunately Adrian had to work. Then cousins from Canada, New Jersey and New York piled into the bus, plus my mother, my aunt, my cousins’ mother who also grew up in Brooklyn, and my uncle. The tour began.

We drove up Bedford Avenue toward Crown Heights and I started the journey with a Benny Goodman song. Then I stood up in my seat to begin giving the history of Brooklyn, my uncle’s Brooklyn at least:

“Happy Birthday Uncle Jeff!” I began,  “My Uncle was born on August 3 1928. The hit song on the radio that day was a really weird song, so I thought starting off with Benny Goodman would be better. Uncle Jeff is the oldest living Keller. That’s amazing! So we are taking this trip to celebrate his life, his childhood, his memories, his histories, legacy and of course to celebrate Brooklyn, the place that made him who he is. Lawrence Ferlinghetti, a famous Brooklyn poet once said, ‘I once started out to walk around the world but ended up in Brooklyn, that bridge was too much for me.'”

I told stories about Barbra Streisand, Brooklyn College, Erasmus High School, the art deco Sears Roebuck Building built in 1932. As the bus crept up Bedford we arrived at the spot where Ebbets Field used to be, the famous ballpark of the Brooklyn Dodgers. Ebbets Field is no longer standing but there is a high rise with a sign on it acknowledging that it once existed. 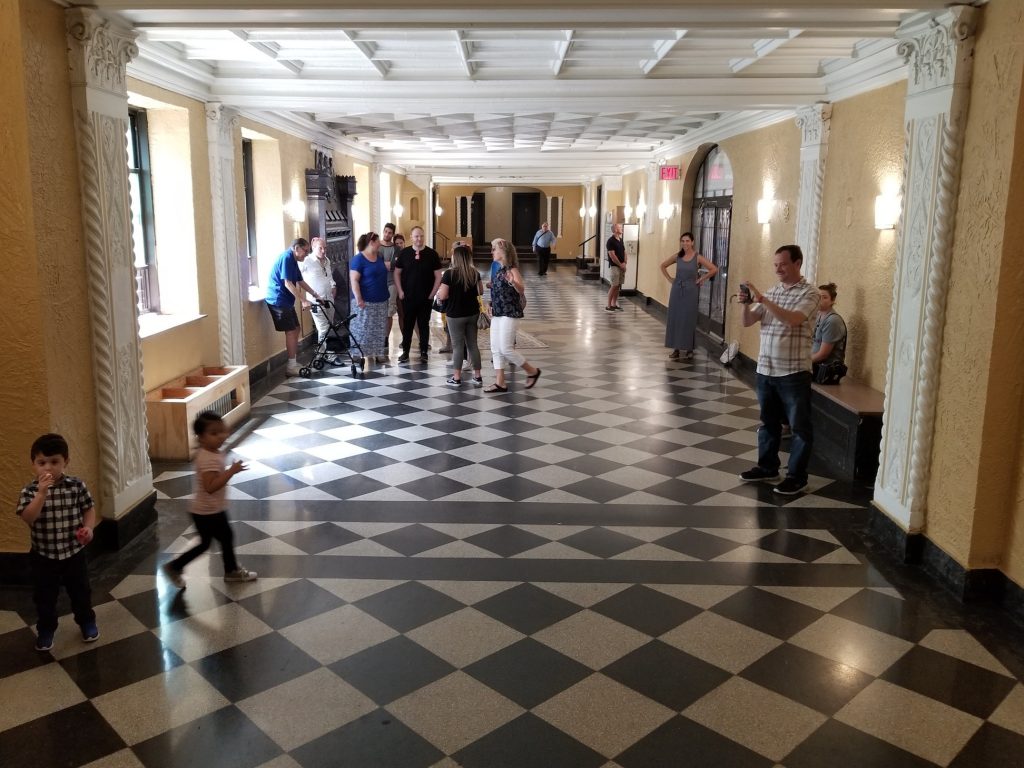 When we all got back in our seats on the bus we rode past the Brooklyn museum, past the Botanical Gardens, the central Brooklyn Public Library and as we were riding down Prospect Park West (the biggest park in Brooklyn) my uncle asked, “Are we going to the lake?” and we were. As I narrated some of the historic sights we were to have a kosher, Brooklyn deli lunch in Prospect Park by the lake. We schlepped six foot-long deli heroes wrapped in plastic into the park and as soon as we reached the lake the sky opened and it began to pour. At first everyone grouped together under the trees, but then we made a run for it back to the bus carrying sodas, sandwiches, water, tables and chairs. I looked back and in the distance my cousin Jordan was pushing my uncle in a wheelchair they had brought for him, through the rain. My uncle was covered in a white blanket, his head peeking out the top, and he was laughing, a childlike laugh of pure joy. When was the last time he laughed like that in the rain?

We had to go back to my mother’s house for lunch. We dried off, ate and got back on the bus again onto the tour’s last stop, and my favorite place on earth, Coney Island. On our way to Coney Island we sang Frank Sinatra’s “New York, New York” at full volume and arrived at Coney across from the famous Cyclone roller coaster. Our first stop in Coney Island was Deno’s Wonder Wheel. I went to high school with Deno and texted him that we were coming. When we rolled my uncle up to the wheel Deno was waiting for us and  had arm bands for everyone in my family so that they could ride all the rides for free. Deno shook my uncle’s hand and we wheeled my aunt and uncle up to the boardwalk where they could smell the salt water while everyone went on the rides.

Coney Island is my favorite place on earth because it is a place for anyone and everyone. You can be from any socio-economic background, any race, any culture and you are always accepted at Coney. My family has become diverse. My uncle’s legacy has created not sameness in my family, but a diversity and a welcomed diversity. My uncle’s history of Brooklyn is different from mine, but Brooklyn for us is always home. In Brooklyn, and especially in Coney Island, we can be American and Jewish but we can also be Mexican-Catholic because when we sit by the beach to remember our childhoods we just are. And my children, my family, though different from my uncle’s family, will enjoy life just as he did and as he continues to do. Besides, I know the guy who owns the wheel. 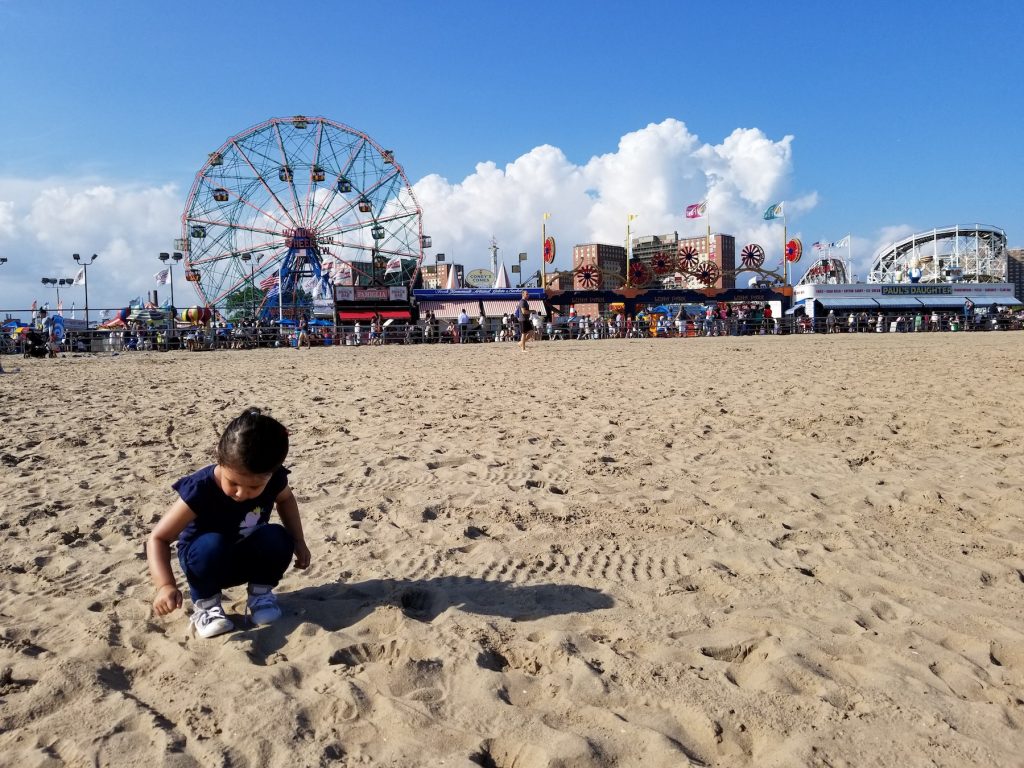 Finding My Place in the Preschool Jew Crew: Parenting with Interfaith Blinders

How Will Our Kids Understand the Past?

How Hanukkah, Christmas and a New Baby Inspired My Children’s Book