A couple of months ago I officiated at the wedding of a wonderful couple—the bride was Jewish and the groom was Christian. Several days after the wedding, I received the following email from the bride, Susan (not her real name):

I have a question for you about Purim. Esther married the king, who wasn’t Jewish, and ended up saving her people. If she had not married the king, all of the Jews in the kingdom would have died. Extrapolating from this example, why is it considered such a bad thing for one to marry outside of the Jewish faith? 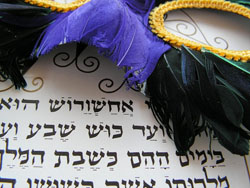 What a great question! Susan made a good point. In Megillat Esther (The Book of Esther, where we find the Purim story), the beautiful young Jewish Esther marries the Persian King Ahasuerus. At first, following the instructions of her cousin Mordechai, Esther hides the fact that she is Jewish. But when the evil Haman convinces the king that all of the Jews in the kingdom should be killed, Mordechai tells Esther that she should go to the king and reveal her true identity. At first Esther refuses, explaining to Mordechai that the king hasn’t summoned her for the past thirty days, and if she goes before the king without being summoned he may order that she be killed. But Mordechai replies, in words that have become very famous: “Do not imagine that you, of all the Jews, will escape with your life by being in the king’s palace. On the contrary, if you keep silent in this crisis, relief and deliverance will come to the Jews from another quarter, while you and your father’s house will perish. And who knows, perhaps you have attained to royal position for just such a crisis.” (Esther 4:13-14 – JPS translation)

Having been convinced by Mordechai’s powerful words of her responsibility to her people, Esther, after fasting for three days, goes before the king. Ultimately, Esther reveals to the king that she is a Jew, and she asks that the Jews of Persia not be exterminated. The evil Haman is impaled on the stake which he had put up for Mordechai, and the Jews survive.

So here’s how I responded to Susan’s email:

Over the years rabbis and Jewish commentators have offered various explanations about Esther’s marriage to the gentile Persian king.  Of course the explanations/commentaries generally reflect more about the writer/commentator (who often has his—and historically it always was a “him”—own agenda/bias he is trying to promote when commenting on the text) than they reflect about the text. There are rabbis (clearly opposed to intermarriage) who have claimed that Esther was forced to marry the king against her will.  The Zohar even says that the Shekhinah concealed Esther’s soul and sent another soul in its place, so that when King Ahasuerus slept with Esther, he wasn’t sleeping with the real Esther.

Of course the biblical text doesn’t say this at all. In the biblical text itself no judgment is made on Esther marrying out of her faith. And as you point out, by marrying someone who wasn’t Jewish, Esther ended up saving her people.

So here’s what I have to say about Esther: By marrying a man who wasn’t Jewish, and ultimately “coming out” to her husband, the king, as a Jew, Esther saves her people. The text doesn’t comment on the fact that Esther is in an interfaith marriage, and I agree that she should be held out as a positive example to interfaith couples.

In my view, the only thing Esther should be faulted for in the story is denying Mordechai’s first request to tell the King that she is Jewish, though she does this because she fears that the king may have her killed. But at Mordechai’s urging she ultimately reveals her true identity to the king and in doing so she saves the Jewish people. The bottom line is: There’s no problem with Esther’s intermarriage—the only problem would have been keeping her Jewish identity secret.

Esther can be a terrific role model for the idea that it’s OK to marry someone who isn’t Jewish so long as you openly and proudly maintain your connection to Judaism and the Jewish people. And just like Esther, you could end up “saving” the Jewish people along the way. The problem is NOT intermarriage…it is when someone stops identifying as a Jew.

Once again, Susan, mazel tov on your wedding. May you, like Esther, have a husband who supports you in that which is most important to you and honors your connection to Judaism and the Jewish people. And may you always be proud of your Jewish identity.