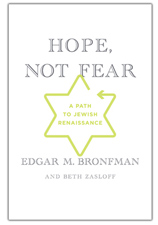 I started 18Doors, formerly InterfaithFamily.com as an independent non-profit in January 2002. There was a time three or four years into it that I gave serious thought to closing down. I started to write an essay that I thought I would submit to Moment magazine complaining bitterly about the lack of funding support for outreach to interfaith families.

Yes, we did have pioneering support, without which we couldn’t have gotten started, from the Walter & Elise Haas Fund, the Richard & Rhoda Goldman Fund, the Jacob and Hilda Blaustein Foundation, and Combined Jewish Philanthropies of Boston. But we were plateaued at a low level, and our existing funders were looking for others to join them.

There was a change in the funding climate that began in 2006. Important funders finally realized that attracting more interfaith families to Jewish life was essential to the growth and strength of the Jewish community. After fluctuating below $375,000 for four years, we raised $535,000 in 2006 and $875,000 in 2007, enabling us to take on important new projects with new staff and start a transition from a start up to a more mature organization.

Edgar M. Bronfman was a key catalyst in this change. His Samuel Bronfman Foundation was our first major new funder in 2006 and since then has been among our most generous funders.

We now have some insight as to why Mr. Bronfman supports our organization, as well as our friends at the Jewish Outreach Institute. With Beth Zasloff, he has written an important new book: Hope, Not Fear: A Path to Jewish Renaissance Here are some of the key things he has to say about interfaith marriage:

If we speak about interfaith marriage as a disaster for the Jewish people, we send a message to interfaith married families that is mixed at best. How can you welcome people in while at the same time telling them that their loving relationship is in part responsible for the destruction of the Jewish people? No one should be made to feel our welcome is conditional or begrudging. The many non-Jews who marry Jews must not be regarded as a threat to Jewish survival but as honored guests in a house of joy, learning and pride.

The oft-cited figure that among interfaith married families only 33 percent of children are raised Jewish does not take into account the possibility that if the Jewish community were more welcoming, those numbers could grow dramatically.

Our concern as a community now should be to welcome people into our community, not to build boundaries around it. Conversion should be a choice people make from their hearts and when they are ready, not a condition by which they and their children are accepted into the Jewish community. There are many non-Jews who may not be ready to formally convert – particularly if their parents are living – but may be willing to raise their children as Jews. From my son Adam I learned how insulting it is if your children, who have a non-Jewish mother, are considered not Jews by other Jews, despite the fact that they grew up in a Jewish….”

If more funders and policy makers in the Jewish community adopted Mr. Bronfman’s attitude towards interfaith marriage, we would see a much greater communal effort to attract interfaith families to Jewish life. We can only hope that that will be the case.

You can find an interesting interview of Mr. Bronfman’s co-author, Beth Zasloff, on Daniel Septimus’ blog at MyJewishLearning.com. You can also listen to an NPR On Point show that focused on the book with a discussion with Mr. Bronfman and Sylvia Barack Fishman.