We don’t know if they bonded over playing vampires or not, but Nikki Reed (the Twilight series), who is from an interfaith family, is engaged to Ian Somerhalder (The Vampire Diaries), who was raised Christian. Reed, whose Jewish father and Italian and Cherokee mother split when she was two, wasn’t raised in a religious household but identifies as Jewish, and her older brother was a bar mitzvah. She and Somerhalder have been dating since early 2014 and became engaged last month. Mazel tov! 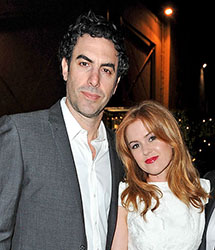 Isla Fisher (Wedding Crashers) and Sacha Baron Cohen (Borat), the parents of two daughters ages 4 and 7, are expecting baby number three this spring. Raised Christian, Fisher converted to Judaism in 2007, before marrying Cohen. They have a production in the works for the big screen, too: They’ll co-star in the spy comedy Grimsby, based on a screenplay Cohen co-wrote. It’s due in theaters next February.

Molly Sims is also about to pop: The actress (Las Vegas), who is not Jewish, and her Jewish producer husband Scott Stuber are expecting their second child this month. They have a two-year-old son, Brooks.

The Talk‘s Sara Gilbert gave birth to her third child, a son named Rhodes Emilio Gilbert Perry on Feb. 28. Gilbert, who’s Jewish, is married to musician Linda Perry (who is not Jewish). Gilbert is mom to son Levi, 10, and daughter Sawyer, 7, from a previous relationship. 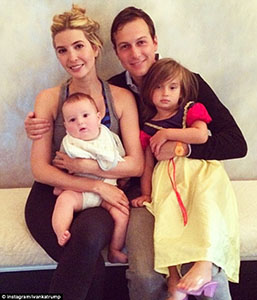 Ivanka Trump, right hand woman to her dad Donald Trump on The Celebrity Apprentice, and a successful real estate and fashion entrepreneur in her own right, recently opened up to Vogue magazine about her conversion to Judaism. Raised Presbyterian, she converted before she married her publisher husband Jared Kushner, who was raised in an Orthodox Jewish home, in 2009. “It’s been such a great life decision for me,” said Trump, who is raising their children Arabella, 3, and Joseph, 16 months, Jewish.

“We’re pretty observant; more than some, less than others,” she said. “I am very modern, but I’m also a very traditional person, and I think that’s an interesting juxtaposition in how I was raised as well. I really find that with Judaism, it creates an amazing blueprint for family connectivity. We observe the Sabbath. From Friday to Saturday we don’t do anything but hang out with one another. We don’t make phone calls.” In this constantly connected world, she noted, “It’s an amazing thing…to really sign off, and for Arabella to know that she has me, undivided, one day a week. We don’t do anything except play with each other, hang out with one another, go on walks together. Pure family.”
Pop Culture