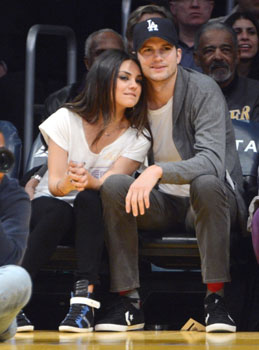 A Romance Years in the Making

Newly engaged actors Mila Kunis and Ashton Kutcher, who met as co-stars in That ’70s Show (1998-2006) are teaming up on the small screen again. Kunis will guest on Kutcher’s CBS series Two and a Half Men as Vivian, a beautiful woman that Kutcher’s character Walden is attracted to immediately. Problem is, he’s about to propose to someone else. No word yet when Kunis, who is of Russian-Jewish heritage, will marry Demi Moore’s ex, but the episode will air in April.

Opening March 7, the ensemble period comedy-drama The Grand Budapest Hotel is set in Hungary between the World Wars and features an all-star cast, headed by Ralph Fiennes as a concierge, including several actors with Jewish roots. Adrien Brody, who plays the nefarious son of a murdered dowager (Tilda Swinton), is in real life the son of a Polish Jewish father and an interfaith mother (her father was Hungarian-Catholic, her mother, Czech-Jewish but she was raised in her father’s faith). Brody was raised without a strong connection to either religion, he has said. Next on his project list is the History Channel mini-series Houdini, in which he has the title role of Jewish magician Harry Houdini. 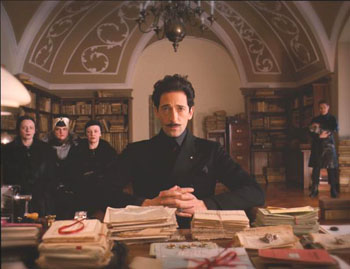 Michael Vartan (Alias) has joined the cast of A&E’s Bates Motel in its just-launched second season, playing a love interest for Norma Bates (Vera Farmiga). He’s a newly divorced man named George who is introduced in the third episode (March 17). Vartan, who was born in France, is actually of Polish-Jewish ancestry on his mother’s side and Bulgarian, Armenian and Hungarian-Jewish heritage on his father’s.

William Levy, the Cuban-born telenovela star who first made a splash in America on Dancing with the Stars, is in the new Tyler Perry movie Single Mom’s Club, playing a waiter at a Mexican restaurant involved with a divorcée who has a jealous ex-husband. Originally William Levy Gutierrez, he uses his mom’s Jewish surname but converted to Catholicism in 2009. Also starring Perry, Nia Long, Wendi McLendon-Covey and Amy Smart, Single Mom’s Club opens March 14.

What’s Next from our Favorite Actors

Among the voice cast in the new animated movie Mr. Peabody and Sherman, opening March 7, is Leslie Mann, playing the mom of Sherman’s pal Penny. Mann, who’s not Jewish, is married to Jewish director Judd Apatow and has appeared in several of his films including Knocked Up, Funny People and This is 40. She’ll next reprise her role as parrot owner Linda in Rio 2, opening April 11, and will join Cameron Diaz and Kate Upton in the comedy The Other Woman, in theaters April 25.

Jake Gyllenhaal’s latest movie, opening March 14, is the psychological thriller Enemy, in which he stars as a university lecturer literally seeing—and playing—double: His life takes a dangerous turn when he hunts down his Doppelganger. Gyllenhaal gets his surname from his director-father’s Swedish family, but his mother is Jewish and he identifies as such. He has several more films in the works, including the mountain climbing adventure Everest, in production for a February 2015 release.

The latest on gold medal-winning Olympic ice dancers Charlie White and Meryl Davis, mentioned in last month’s column, is that the pair is among the contestants in the new cast of Dancing with the Stars, but this time they’ll be competing against each other. White (the interfaith half of the duo) will be paired with pro Sharna Burgess, and Davis will dance with Maksim Chmerkovskiy in the dance contest, which premieres on ABC March 17.