Gyllenhaal On a Role with Chutzpah

In the SundanceTV miniseries The Honorable Woman, premiering July 31 at 10 pm EST, Maggie Gyllenhaal plays Nessa Stein, a British-Jewish baroness and member of the House of Lords whose father was Israeli, and who becomes embroiled in a web of Middle East political intrigue. It wasn’t hard for her to connect to the character.

“Nessa is an Israeli citizen, raised in England and raised Jewish with that culture around her, but she’s a woman of the world, she has chutzpah. I didn’t have to act Jewish. I was Nessa. I was never raised as a Jew, but my mother is Jewish and I definitely feel culturally very connected to Judaism,” says Gyllenhall. “My father grew up Swedenborgian, a sect of Christianity, and I was raised in some ways both, but my mom was the one who was saying things like, ‘You’re sick, let me make you chicken soup.’ My great-grandparents came over from a shtetl in Russia. My grandfather was a tailor on the Lower East Side—the classic New York Jew background. But my other side is very different.”

Gyllenhaal continued the interfaith tradition when she married actor Peter Sarsgaard, who is Catholic, in May 2009. They have two daughters, Ramona 7, and Gloria, 2. “My daughters are a mix of a lot of different things,” she says, adding that the Honorable Woman producers arranged her shooting dates around Ramona’s school schedule. She’s glad she didn’t turn the role down, which she initially tried to do. She beams, “I can say that I’ve never been more proud of anything I’ve done than this.”

Gyllenhaal’s next project will be a return to the stage. “I’m going to do The Real Thing on Broadway with Ewan McGregor,” she reveals. McGregor happens to be intermarried as well. The Real Thing opens Oct. 31.

Hank Azaria grew up Queens, New York, in a Sephardic Jewish family, and he is now married to former actress Katie Wright, who isn’t Jewish, and they have a 5-year-old son, Hal. Religious differences have “never been an issue in our relationship,” says Azaria. “We feel like, with our son, we want to expose him to both our faiths and let him sort it out down the road.”

A triple Emmy winner for voicing multiple characters on The Simpsons, Azaria is currently playing FBI agent Ed Cochran in the Showtime drama Ray Donovan. “I was a big fan of the show before I joined the cast. Everybody’s many shades of gray in this show, and this character is no exception,” he says. Next, Azaria will lend his very versatile voice to the animated comedy Bordertown, due for release in January.

In the new WGN America series Manhattan starting July 27, about the making of the atomic bomb, fictional characters tell a factual story of the Los Alamos scientists behind the cataclysmic weapon that would end World War II. Many of these scientists were Jewish, and as young Charlie Isaacs is told when he arrives at the secret New Mexico desert facility, it has “the highest IQ of any town in America and more Jews than Babylon.”

Unfortunately, with that came anti-Semitic treatment. “Anti-Semitism is very present in our show. A lot of the characters are Jewish, and they are in some way being used by a country that at the time didn’t really trust them or have a place for them,” says Ashley Zukerman, who plays Isaacs and is Jewish himself. Director and executive producer Thomas Schlamme, whose Jewish parents fled Nazi Germany, made sure this particular aspect of history was included.

Zukerman, who was raised in a Jewish community in Melbourne, Australia, faced “very little” anti-Semitism there, “but without a doubt there were moments of it.” His character, Charlie, “is someone for whom being Jewish is such a major identity point. Being a Jew in 1940 in the United States was something else entirely, and having family in Poland, as well. I was able to read and explore things I didn’t know about,” he says of his research, which included talking to a nuclear physicist. “At first, I read everything that I could, but at a certain point I had to put everything aside. One of the major things about the role was to understand how giants like these talk with and relate to each other and competitively engage with each other,” Zukerman says. “Those emotional questions about what happens when these guys go home are not in the books.” 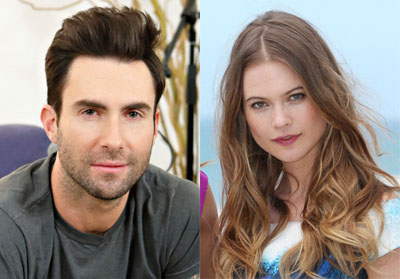 Mazel tov to Maroon 5 frontman and The Voice’s Adam Levine and his bride Behati Prinsloo, who were married on July 19 in Los Cabos, Mexico.

No word on whether the interfaith couple had an interfaith ceremony, but Levine’s long-time friend, Jewish actor Jonah Hill, officiated—not Prinsloo’s minister father.