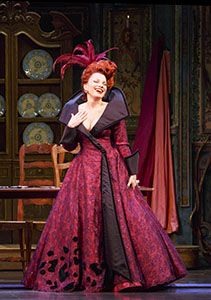 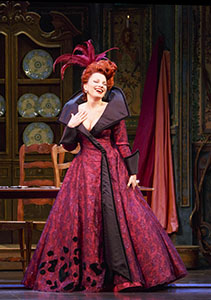 Jewish actress Fran Drescher is known for her loud and lovable comedic characters on TV in sitcoms like Happily Divorced, Living With Fran and of course, The Nanny. These days, she’s bringing her larger than life persona to the stage as the wicked stepmother Madame in a new production of Rogers and Hammerstein’s musical Cinderella at Los Angeles’ Ahmanson Theatre, a role she first played on Broadway last year.

“I have a very small singing part and a much bigger speaking part for obvious reasons,” says Drescher in her familiar, raspy Queens accent. She enjoys playing “a character you love to hate. But I’m not completely black or white. Every time I’m out there, there’s something I do that’s funny, so it redeems me a little bit.”

Drescher has a new real-life role as well: Newlywed. She married Dr. Shiva Ayyadurai last September in an interfaith ceremony at their Malibu home. “We call each other the Hin-Jews because he’s Tamilian, and the Tamils of Southern India came from Ethiopia just as the Hebrews from Palestine came from Ethiopia. The DNA is the same,” Drescher says. A Hindu priest and a Jewish friend of hers with a license to perform marriages co-officiated at the ceremony.

The fact that Ayyadurai isn’t Jewish wasn’t a factor for Drescher, though she does feel strongly about her Jewish heritage. Jewish holidays growing up were about getting together with family for meals and lively “Talmudic kind of intellectual debates” on a range of subjects. “My father was not a big believer in structured religion but he raised us to be proud of our heritage and to be tolerant of others,” she says.

Drescher’s parents adored Ayyadurai from the get-go, she says. “He’s a wonderful man. “He has tremendous character, he’s enormously principled. And he’s a genius,” she praises. “They think he’s absolutely wonderful.’

The couple met in August 2014 at a Deepak Chopra event called Sages and Scientists, where Ayyadurai (an MIT-educated scientist credited with the invention of email who is now developing new computer software for medical research) was speaking. 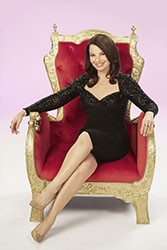 “I liked the way he looked. I liked what he had to say, and as soon as he was done, I made a beeline for him. He didn’t know who I was, but his sister told him who I was—she used to watch the show with his mom all the time.

Ayyadurai “is the genius in the family, but he doesn’t intimidate me,” says Drescher, explaining that he forgets his wallet and needs reminders to feed the dog. “He’s a nice, normal guy.”

The relationship is quite different from her previous marriage—to her high school sweetheart, who later came out as gay—because she’s different now.  “I think that I’m more evolved as a human being, and I’m more ready for someone like Shiva. I know myself better. I’m not ruled by my fears as I once was and I’m able to be vulnerable around people as I once wasn’t able to be,” she says. “Life has given me some hard learned lessons but I’ve learned them and they’ve made me a more well-rounded woman, and I think, a deeper individual.”

Like Drescher, Ayyadurai was also married before, “for about a year when he was in college, very young, and then he lived with a woman for many years, and then married another woman for a brief period of time,” Drescher says. Neither had children, but they’ve discussed the possibility of adopting, “maybe, if we’re not too old!”

Their busy lives are a consideration as well. Drescher is currently developing theater, film and TV projects and a new book. Her previous volumes Enter Whining and Cancer Schmancer, were best sellers, the latter launching a movement that has become “one of the great accomplishments of my life,” says Drescher, who is a 13-year survivor of uterine cancer and a tireless advocate of early detection. Her new Detox Your Home initiative “educates Americans on how to reduce the risk of getting cancer as well as a whole bunch of other chronic diseases.”

Right now, her days are full: She’s performing in Cinderella through April 26, playing eight shows a week. It’s a big commitment, but she wouldn’t rule out a return to Broadway if the right role came along; perhaps Mama Rose in a revival of Gypsy. “I don’t think I have the chops for it singing-wise,” Drescher says. “It would have to be adapted for me to be able to pull it off.”

Streaming alert: AOL’s new reality series Connected follows the lives of six New Yorkers and their relationships, and two of these happen to be interfaith relationships. The first four episodes are available now, with four more to be added each week (April 13, 27, May 11 and 25). We will have interviews for you soon!