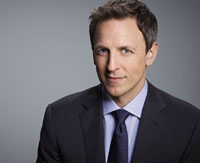 On Feb. 24, Seth Meyers inherits the desk at Late Night from Jimmy Fallon, who has moved up an hour to host the Tonight Show. The former Saturday Night Live performer, writer and “Weekend Update” anchor has a Jewish paternal grandfather, though he was raised Christian.

Now he’s continuing the interfaith tradition: He and lawyer Alexi Ashe, who is Jewish, were married by a rabbi in a Jewish ceremony on Martha’s Vineyard last September. 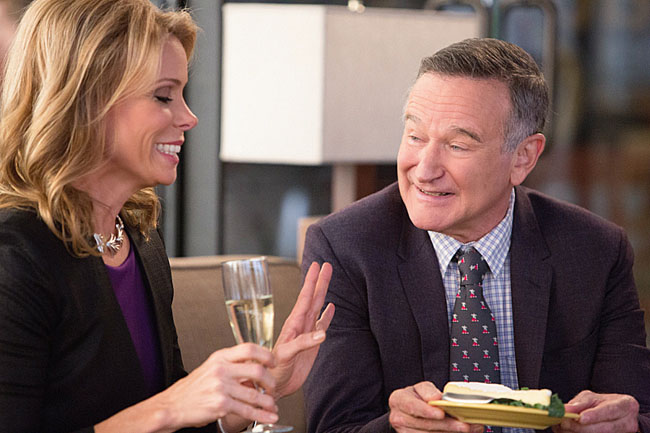 Actress Cheryl Hines was raised Catholic, but a lot of her roles have a strong Jewish or interfaith connection, most famously, Cheryl, the wife of Larry David in Curb Your Enthusiasm. She’s also played a bar mitzvah planner named Casey Nudelman in Keeping up with the Steins and Florida divorcee Beth Stein in Bart Got a Room. On Feb. 27, she returns to familiar territory, playing the mother of a bar mitzvah boy and a client of ad man Simon (Robin Williams) in CBS’ The Crazy Ones. 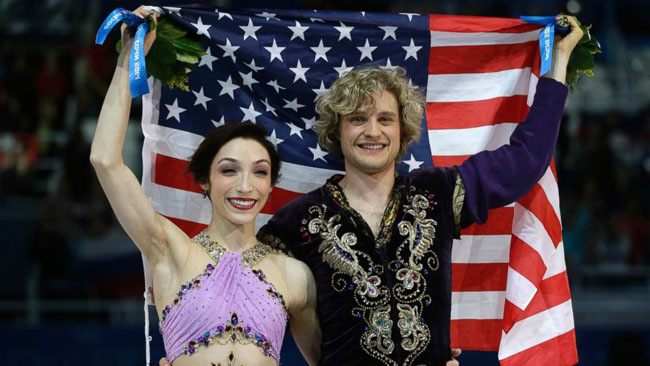 Ice dancer Charlie White (whose mother is Jewish and father is not) and his partner Meryl Davis made history when they won a gold medal at the Winter Olympics in Sochi, Russia, the first American pair ever to do so. No one could be prouder than White’s mother, Jacqui, who had been in the audience cheering him on every night. Another big supporter of the mop-tipped skater is his girlfriend Tanith Belbin (not Jewish) who won a silver medal at the 2006 Olympics with her ice dancing partner, Ben Agosto. Ben is also interfaith, the son of a Jewish mother and a Puerto Rican-Catholic father. 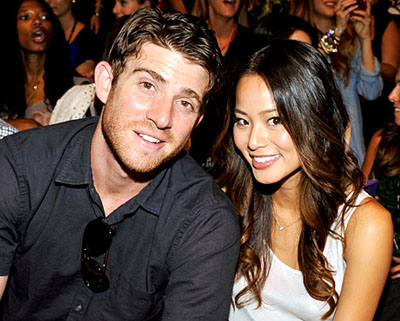 Korean-American actress Jamie Chung (who you might recognize from Real World: San Diego and numerous roles after that, including Mulan in Once Upon a Time) and Jewish actor Bryan Greenberg (Friends with Benefits, One Tree Hill, How to Make it in America) were engaged in December, and interfaith issues are an ongoing topic of discussion as they plan their 2015 wedding. “We’re both very religious people and I would like to expose my children to my Korean culture, and Judaism is extremely important to him. We respect that about each other,” says Chung, who has “entertained the idea” of converting to Judaism. “It’s under discussion. It’s very complicated,” she says.

Meanwhile, she’s keeping busy with a host of projects. Rudderless, directed by and starring William H. Macy as a grieving father, recently premiered at the Sundance Film Festival, and Sin City: A Dame to Die For comes out in August. She’s also in the supernatural thriller 7500 and two films with Greenberg: the comedy Flock of Dudes and drama A Year and Change, which he also executive produced. “I was kind of nervous about working with him, but we get along so well and we always help each other through our projects,” Chung says. “It’s always really nice to have a second opinion from someone you really trust.” That won’t be out till 2015, but audiences will see Chung much sooner on the small screen. She stars in the new NBC series Believe as a woman tasked with protecting a young girl with unusual powers. It previews March 10 following The Voice before moving to its regular timeslot on March 16.