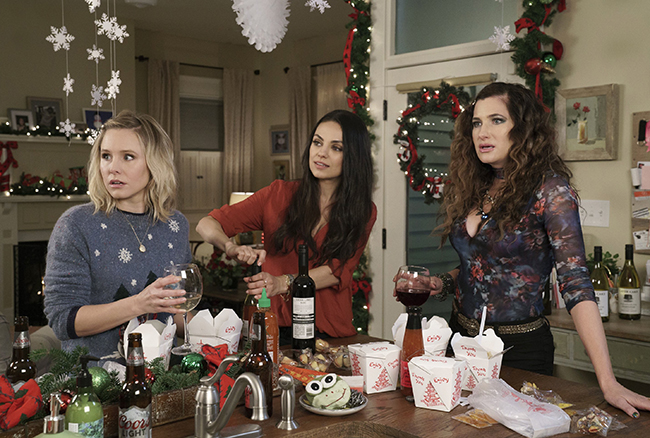 Prepare to Laugh at these Bad Moms Again

In the comedy sequel A Bad Moms Christmas, opening in theaters November 1, the title trio (Mila Kunis, Kristen Bell, Kathryn Hahn) brace for the holidays—and visits from their own mothers, played by Christine Baranski, Cheryl Hines and Susan Sarandon. Two of the stars are in interfaith marriages. Kunis, who is Jewish, is married to Ashton Kutcher, who is not Jewish. They have two kids, daughter Wyatt, 3 and son Dimitri, 10 months. Kunis is wanting her kids to have a more charitable attitude this year as they celebrate Christmas, saying, “We’d like to take a charitable donation like to a children’s hospital, whatever you want.” Hahn, who played a rabbi on Transparent, was raised Catholic and is married to Jewish actor-producer Ethan Sandler. He is the father of her son Leonard, 11 and daughter Mae, 8. 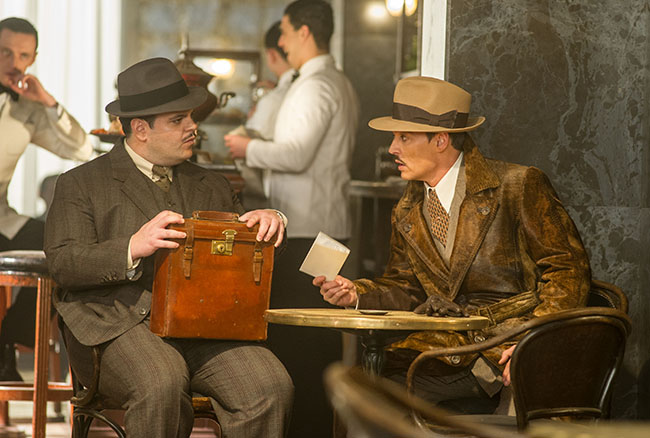 The 1974 version of Agatha Christie’s Murder on the Orient Express featured an all-star ensemble including Albert Finney, Sean Connery, Lauren Bacall, Anthony Perkins and Vanessa Redgrave. The new remake, out November 9, is no less stellar. Directed by and starring Kenneth Branagh as detective Hercule Poirot, it features Daisy Ridley, Johnny Depp, Michelle Pfeiffer, Penelope Cruz, Judi Dench,and Josh Gad as Hector McQueen, the character Perkins played in the original. Gad, who is Jewish, has been married to Ida Darvish, who was raised Catholic, since 2008. He’s currently filming Party of the Century, playing writer Truman Capote in a story about a romance and the famous ball Capote hosted in 1966. 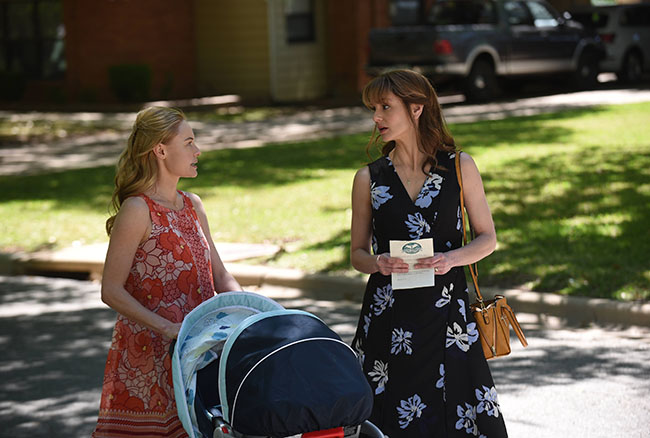 The Long Road Home, based on Martha Raddatz’s best-selling book about the Iraq War, follows soldiers caught in an ambush in Baghdad in 2004 and their families on the homefront. The National Geographic miniseries launches November 7 with a two-hour premiere and stars Jason Ritter, Michael Kelly, Kate Bosworth, Jeremy Sisto and Sarah Wayne Callies. “It’s a privilege for us to represent the women’s courage and strength in balance to what the guys were doing,” says Callies (Prison Break, The Walking Dead, Colony), who plays the wife of a senior officer (Kelly). She has Jewish ancestry on her mother’s side. “My grandfather was a Jewish refugee from Hungary. He changed his name from Klein to Wayne,” she says. “It’s part of my heritage,” she says of Judaism, “but I wasn’t raised with it and don’t practice it now.” 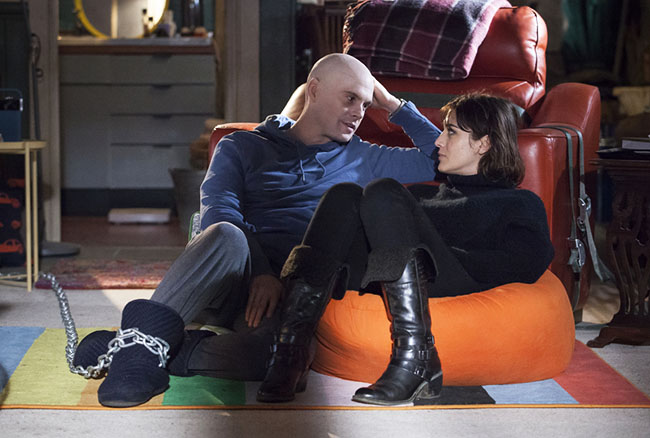 Newlyweds Lizzy Caplan (Masters of Sex) and Tom Riley (Da Vinci’s Demons) star in the edgy new British import comedy series Ill Behaviour, which debuts on Showtime November 13. Caplan, who is Jewish, and Riley, who is not, tied the knot in Italy in September. In the six-part series, Riley is diagnosed with cancer but opts for homeopathy instead of the chemotherapy that could save his life. His concerned friends (Chris Geere, Jessica Regan) kidnap him and whisk him away to a country mansion to force-infuse him with the chemotherapy drugs along with the help of Caplan’s character, who is a cocaine, sex and alcohol addicted oncologist. Caplan and Riley will reteam again in the sci-fi thriller Extinction, due out January 26. She’ll also star in the miniseries Das Boot, and appear as herself in The Disaster Artist, opening December 8. 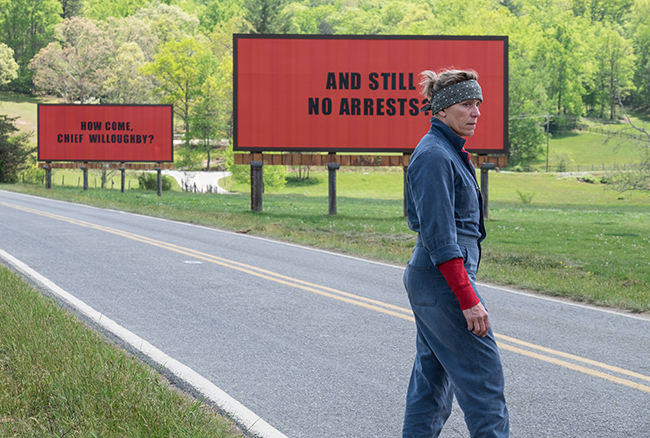 An Oscar-worthy Performance for Frances McDormand

InThree Billboards Outside Ebbing, Missouri, Frances McDormand gives a tour de force—and sure to be Oscar-nominated—performance as a mother of a murdered daughter who challenges her town’s police for their inaction in the case. The first salvo in her one-woman war involves an incendiary message mounted on the titular billboards, and the movie (opening November 10) just gets better from there. McDormand has been in one of Hollywood’s longest marriages—interfaith or otherwise—since 1984. Her husband is Jewish writer-director Joel Coen, who has directed her (with his brother Ethan) in six films, including her Oscar-winning performance in Fargo. 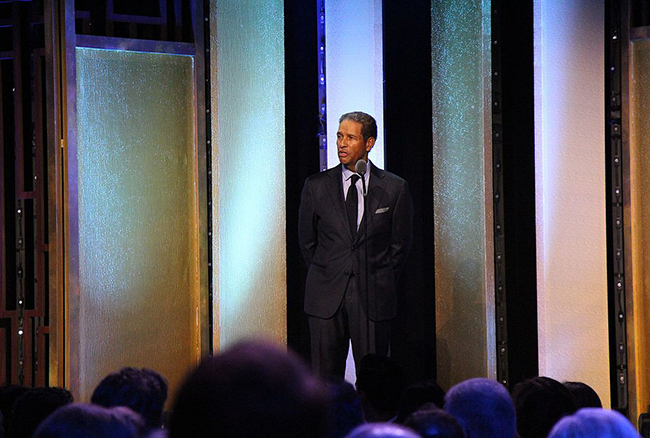 Two upcoming guests on PBS’ Finding Your Roots with Henry Louis Gates, Jr. are Christians who discover Jewish roots they didn’t know they had. In the episode airing November 7, broadcaster Bryant Gumbel finds out that his paternal fourth great grandfather was a German Jew, confirmed by DNA that is 7.1 percent Ashkenazi Jewish. And in the November 14 installment, Nicaraguan-born political commentator Ana Navarro learns she has some Jewish DNA in her history. “When I went to Israel, there was something that touched me so deeply. I just thought it was because it’s Israel. How are you not touched deeply when you go to the Holocaust Museum?” she says. “But I have always felt this inexplicable personal connection to the Jewish experience.” Now she knows it’s in her DNA. 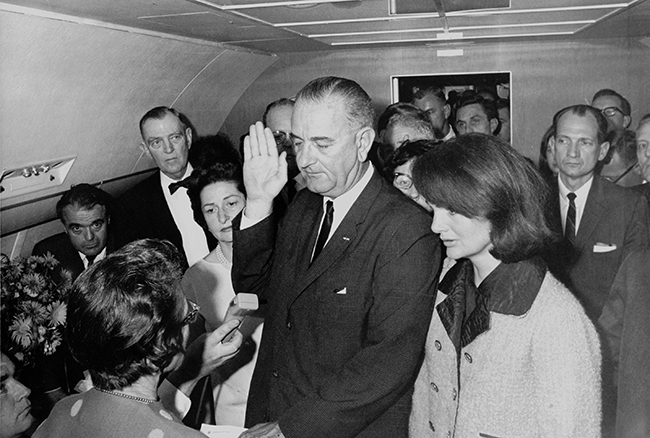 A Historical Look Back

Lyndon B. Johnson was Senate Majority Leader when he lost the Democratic presidential nomination to John F. Kennedy, and became JFK’s running mate, then vice president. Little did he know he’d become the president three years later when Kennedy was assassinated in Dallas. That history comes alive—as do all the political and personal conflicts and issues leading up to it including civil rights—in the excellent LBJ, with the superb Woody Harrelson in the title role.

Three of the historical figures who are portrayed in the film, out November 10, are from interfaith families. JFK speechwriter and advisor Ted Sorensen’s (Brent Bailey) mother was of Russian-Jewish heritage. Pierre Salinger (Rich Sommer), press secretary to both JFK and LBJ, had a Catholic mother and Jewish father. And historian and author Arthur Schlesinger, Jr. (Wallace Langham) had a Jewish paternal grandfather who converted to Protestantism and then married a Catholic.