Hold the Cheerios and Pass the Macaroons: The Word Mavens Explain Passover Foods

Passover marks the Exodus of the Israelites from generations of slavery in Egypt to freedom in the Promised Land of Israel. But if Passover celebrates freedom, why do we celebrate by enslaving our menus and oppressing our taste buds?

That’s a joke Jewish families have shared for years, because one of the main traditions of the week-long holiday is to refrain from eating hametz, the Hebrew term for the food that’s forbidden on Passover. (That is, anything really delicious. Just another joke.) Specifically, hametz includes all regular bread or bakery products plus any leavened or fermented food made with one of five prohibited grains–wheat, corn, barley, rye or oats. The expression “keeping Passover” means no eating cookies, pasta, cakes, breads, pizza, bagels and such for a full week. In its place we get matzah, the unleavened flat cracker made with flour and water.

Now you know why Jews get grumpy every spring. 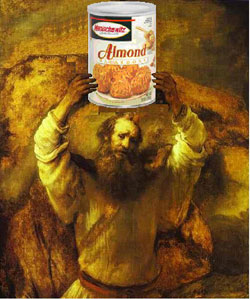 Matzah has been around for thousands of years. It’s symbolic of the haste with which the Israelites fled Egypt after 400 years of laboring under harsh conditions to build the cities and pyramids. Tradition says that because they didn’t have time to allow their bread to rise, the Israelites packed flat, unleavened bread to take with them on their journey across the desert.

It makes sense that Jews commemorate the Exodus by eating matzah during Passover. But why no bagels and muffins? That’s because over the centuries, the list of prohibited foods has grown through rabbinic discussions and elaborations on the religious laws. These forbidden foods are called hametzdik, while food that’s permitted is pesachdik (Pesach is the Hebrew word for Passover).

Like much of Judaism, each family’s traditions and what they consider pesachdik can vary by geographic background. During Passover, most Ashkenazic Jews (from Eastern Europe) also avoid rice, soybeans, peas, lentils and peanuts – foods known as kitniyot. Sephardic Jewish communities didn’t adopt this custom because these foods were staples of their Mediterranean diet. So if you want peanut butter on your matzah, claim a Sephardic ancestor in the family tree.

During the seder, the traditional ceremonial dinner on Passover, you might also notice regional food variations. The Ashkenazic version of haroset, the ritual food that’s symbolic of the mortar and bricks the Israelites used to build the pyramids, is a mixture of apples, cinnamon, chopped nuts and sweet red wine. The Sephardic version uses more Mediterranean fruits and might include dates, pistachios or cardamom.

Traditionally, in the days before Passover, kitchen shelves and pantries are emptied and swept clean of crumbs, but there are many interpretations and variations about to rid your house of hametz. Among Jews, the divisions in observance are as deep as the Red Sea.

The most observant cover their kitchen counters in aluminum foil; super clean their ovens; and completely switch dishes, silverware, cups and plates to sets reserved exclusively for Passover. Many symbolically “sell” their hametzdik foods to a non-Jewish person, usually through an agent like a rabbi, or donate the cookies, cold cereal and other forbidden items to a food pantry.

For more liberal Jews, it may be enough to simply clean their kitchens thoroughly of crumbs, pack up bread, cookies, cereal and other products made with flour and put it all in a sealed closet or down the basement for the week.

Now that bagels and coffee cake are tucked away, what’s on the menu? Matzah – in all its variations. Yes you can buy it with and without eggs, with and without salt, onion-flavored and whole wheat – but it still tastes like cardboard.

Traditional Jews will look for shemurah matzah, that is produced with wheat that has been watched from the time of the harvest through the baking process to ensure that it’s not leavened at all. It’s round and often well done (okay, burned) because it’s made by hand. They’ll also avoid any manufactured or processed food, even items like milk and cheese, that doesn’t have a “kosher for Passover” stamp on it. This label insures that these products haven’t come in contact with leaven, grains or anything that’s not pesachdik.

To help cooks get through the week-long holiday, matzah has numerous incarnations: matzah meal is pulverized matzah that’s supposed to substitute for flour but tastes more like sand. Combined with eggs, oil, salt and pepper, this is the matzah ball that’s often found floating in chicken soup. Farfel, or crumbled matzah, is used in recipes that call for bread cubes, such as stuffing. It’s also found in kugels–the sweet or savory baked casseroles often served at holiday dinners. And then there’s matzah brei, a breakfast favorite: crumbled matzah softened with water, mixed with eggs and fried.

The most famous Passover dessert has no trace of matzah in it. It’s the macaroon, a flourless chewy ball-shaped cookie made with ground nuts, shredded coconut and egg whites. The ubiquitous tin cans of macaroons–in flavors like Rocky Road, Triple Chocolate and Almond Chocolate Chip–spring up on supermarket shelves each year at Passover. We stock up.

We don’t stock up on the many pesachdik versions of grocery store staples that Jewish manufacturers have tried to fool our taste buds with. Mostly, they’ve failed. Yes, we were once tempted by granola bars made with farfel instead of oats and nuts and by the various cold cereals, but now we don’t waste our money. Air puffed matzah meal is not a good thing, no matter how cute the dancing lion on the box looks.

There’s one final Passover tradition that’s not official but widely observed. It’s common for families to celebrate the end of the holiday–and the return to eating leavened products–by having pizza for dinner on the night that Passover ends. There’s nothing like biting into a slice of hot yeasty, tomato cheesy-laden dough after a week of dry matzah–to make you appreciate your freedom. Maybe that’s what they meant!

Joyce Eisenberg wrote the Dictionary of Jewish Words with Ellen Scolnic. A 1973 graduate of Penn State University with a bachelor’s degree in English, Joyce lives in Merion with her husband, Ted, and two children, Ben and Samantha. You can read more about her at www.thewordmavens.com.