Children’s books about the Holocaust are a good idea, and maybe even a great one. You can write a children’s book to deal with many difficult subjects, but if there’s one unifying characteristic of children’s literature, it boils down to this: hope. A children’s book absolutely has to offer some hope. This is just a developmental truth of the target audience. There’s a reason “unremittingly bleak” is not a shelf category in the Barnes and Noble Children’s Section, and Benno and the Night of Broken Glass is that reason. 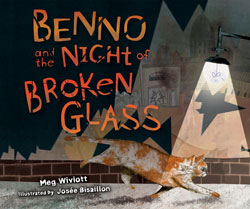 Meg Wiviott’s book (illustrated by Josée Bisaillon) tells the story of Kristallnacht from the perspective of a cat. This means beautiful cut-paper illustrations, lush and layered, and a haunting little story of a cat who makes friends with everyone in the apartment building and then, after Kristallnacht, never sees some of them again. As a story for an older audience, it’s an effective way to show the split in German society, and the way all of society got rewritten as Jew versus non-Jew. As a children’s book, this story is a disaster. I characterized it to a friend as: “And Benno the cat never saw Sophie and her family, ever again. OK, kiddos, lights off! Sleep tight!”

As my 12-year-old would say: “Yeah, no.” If you need a paper-cut cat to tell your story, it’s a sure bet your audience is too young for genocide. I don’t at all think Holocaust stories are inappropriate for children, even children who are picture-book age. But children’s literature is not the place to present the unvarnished historical record; it’s not the place to make this book’s point, which is that ordinary Germans–the Schmidts and the Gerbers, the greengrocer and the butcher–stood by while their friends and neighbors suffered unimaginable destruction and were carted off to extermination.

The only possible takeaway for children from this book is that the world is divided into Jew and non-Jew, and the latter category has no interest in helping or befriending the former. “You are alone in the world” is not the message I want my kids to absorb from their picture books. These are tough historical ideas, and potentially middle-schoolers might be able to wrestle with them, but not children who listen to picture books. To confront that audience with these ideas is either casually cruel or willfully ignorant. I don’t read many children’s books that I think are actually morally wrong, but this one may be it.

One last misfire in this ill-conceived book: In the historical notes that follow (and again, you know you may have misjudged your audience when your children’s picture book requires extensive notes), the fictional schoolchild Inge and her family are described as “Germans,” while Sophie and her family are described as “Jews.” Reflecting Nazi propaganda on that linguistic level is a misstep that is characteristic of this book’s awkward uncertainty of purpose and intention, and frankly, a little horrifying. I’m sure the imaginary Sophie would be surprised to learn that she and her family were not, in fact, Germans. 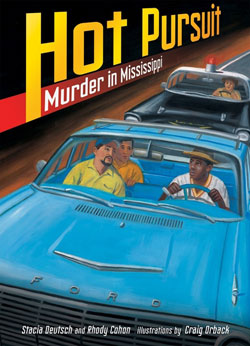 I always evaluate books I read to my kids by the questions that are likely to arise after the reading. In this one, I’m imagining stunned silence, followed by a quiet mental rearrangement of all their friends into Jews and non-Jews. It’s not something I want going on in their heads, especially for kids like my younger ones, who are only aware of the broad outlines of the Shoah anyway. When their teachers and I do discuss it with them in more detail, this book is the last way I want to do it.

Hot Pursuit: Murder in Mississippi by Stacia Deutsch and Rhody Cohon, with illustrations by Craig Orback, is an example of how to deal with violent topics for younger audiences and do it right. This book is aimed at a slightly older audience: third to fifth grade, I would estimate. It’s the story of the fateful afternoon in June 1964 when civil rights activists Michael Schwerner, James Earl Chaney and Andrew Goodman were stopped by police and taken to jail in Neshoba County. They were brutally beaten, shot and buried in an earthen dam; it would be 41 years before their killers were brought to justice.

In the story as this book imagines it, the group’s leader, Schwerner, must make a decision: should he tell Chaney to pull the car over, or should he tell him to floor it and try to evade the police car? The book uses his decision as a framing device, and the rest of the story is told from Schwerner’s point of view, in flashback, as he remembers meeting Chaney and Goodman, their goals, their ideals and everything that brought them to this sunny June afternoon. Goodman–Schwerner’s fellow Jew–had been in Mississippi only a day, and Deutsch and Cohon imagine him urging Schwerner to pull the car over, to obey the law. Their imagining of Chaney is even more poignant: as a black Mississippian, Chaney had reason to know that they were in danger when the deputy sheriff signaled for them to pull over on that deserted road. So Schwerner has to decide whether he listens to Goodman or to Chaney, and of course, adult readers already know what he decides: he follows Goodman’s instinct and tells Chaney to pull the car over. Within hours, they would all be dead.

For me, the fascinating thing about this wonderful book (and what a remarkable thing that is, when a book aimed at my 9-year-old can also fascinate me) is the real question lurking in it: Did Schwerner make the right decision, or the wrong one? The book doesn’t presume to tell kids one way or the other. If alive equals right, then Schwerner made the wrong decision, because everyone in that car ended up dead. On the other hand, the book ends with the inscription on J.E. Chaney’s grave:

By subtly framing their deaths as martyrdom, Deutsch and Cohon are leading kids to a discussion not of violence and death, but of life and its significance. And just as important, this book, though aimed at an older audience, doesn’t make the mistake of Benno and the Night of Broken Glass. Toward the end of the book, there’s a small passage that looks ahead: “Someday blacks and whites would be equal … their children would play together in peace.” This is accompanied by an illustration of the Obamas frolicking on the White House lawn, and while it doesn’t undercut the book’s seriousness of tone, it does provide an important counterpoint, reminding kids that evil does not, in fact, triumph, and though that arc of justice may be long, it always, in the words of Dr. Martin Luther King, bends toward justice.

I have a problem with Mindy Avra Portnoy’s A Tale of Two Seders: I can’t manage not to tear up while reading it. I’m not generally an easy cry, so I have no idea why this quiet, artful little tale about a young girl navigating her parents’ divorce would do this to me, but there it is. There are no syrupy lessons to be drawn here, just a sweet story about what divorce means for the 7-year-old girl who spends one night of Pesach at her mom’s seder, and one night at her dad’s. Valeria Cis’s light-filled illustrations evoke the colors and perspective of a child’s world with unobtrusive artistry and lend poignance to the girl’s repeated dream that her father will, on a magic carpet, fly back home so they can all be together again

Of course, that doesn’t happen. Instead, adults get an amusing glimpse of six different seders at two different paces: snoring grandpas, barking dogs, earnest feminists, crying babies. Families, her mother explains, are like haroset. They might have wildly varying ingredients and flavors, and some are stuck together more than others. But each is “tasty in its own way,” the book concludes. The last page has a constellation of recipes for different haroset–Yemeni, Israeli, traditional, etc. Using the food of Pesach as a metaphor for the family itself might be hokey, but this is so deftly done that I honestly didn’t see it coming. I’m going to try some of these haroset recipes, too, just as soon as I finish dabbing at my eyes.

Mimi DuPree lives and works in Atlanta, GA, where she teaches Latin at The Westminster Schools and raises her three children.