Happily Acknowledging Both Easter and Passover, in Our Own Special Way

Spring is definitely in the air. Unprompted by nothing other than a powerful urge to “renew and refresh,” I’ve recently cleared out closets, emptied cabinets, and wiped down cupboards–the better to fill them with enough chocolate rabbits, candy eggs, marshmallow chicks, multicolored jelly beans, and bean-bag bunnies to fill eleven Easter baskets.

No, I do not suffer from “Easter Bunny Syndrome,” or any other seasonally induced neurosis more serious than an occasional bout of “spring fever.” I do, however, bring ten Easter baskets to a thrift store that supports a local shelter for battered women. The baskets are distributed to the kids who reside in the shelter with their moms.

The eleventh basket is for my daughter. She is eighteen and well past the “normal” age to be a recipient of an Easter basket, but she is autistic, so ordinary rules don’t apply. And though she was raised Jewish, because she has always received an Easter basket and thinks of it as a joyful “rite of spring” (which, in effect, it is) I see no reason to put an end to this happy family tradition.

I learned to put together a great Easter basket even before my own daughter was born. When I first married my Episcopalian husband, two of his sons from a previous marriage spent part of the spring holidays with us. The very first year, when the boys were five and six respectively, they both believed unwaveringly in the Easter Bunny.

I had no intention of enlightening them.

In fact, in order to avoid shattering their innocent illusion, I did everything but grow ears and a tail and hop around the house. The night before Easter Sunday, I left “rabbit tracks” and other “evidence” (such as a few partially eaten lettuce leaves and one or two well-nibbled carrots) in different rooms for the children to discover when they woke up the next morning. Of course, two overflowing Easter baskets served best to prove that the most famous bunny in the world (besides Bugs) had indeed paid them a nocturnal visit.

The boys’ mother picked them up some time during the mid-morning hours on Easter Sunday, so my husband and I did not accompany his sons to church. However, had their mother been unavailable, my husband and I would have gladly taken them–and we made sure they understood this.

As happens more often than not, that year Passover and Easter were celebrated at almost the same time. I held a seder, the ritual Passover meal, in our small apartment which I, as the only Jewish person present, conducted. I adapted the seder for my husband, his sons, and a non-Jewish friend, by creating my own haggadah, the book that serves as a guide for the seder. I excerpted those parts of the traditional seder service I felt would be most meaningful to my company. (I did, however, include the Hebrew versions of the blessings in order to provide my guests with an extra measure of authenticity–to compensate for significantly abbreviating the haggadah.)

Prior to meeting me, my stepsons had absolutely no experience with Jews or Jewishness of any sort, so they were looking forward to what they looked upon as a new, if slightly exotic, experience.

Our seder was short but lovely. The boys were too shy to openly participate, but they were fascinated by the different ritual foods on the seder plate–especially the roasted egg they called a “Jewish Easter Egg.”

When my husband and I moved East, we no longer saw the boys during the spring holidays. But when my daughter was quite young, I presented her with an Easter basket, and continued to do so every year. I never felt that this act compromised my loyalty to my own tradition. For some admittedly illogical reason, the Easter basket just didn’t possess the same symbolic resonance as a Christmas tree, so I had no “guilt” about giving one to my daughter. (In contrast, I only allowed a Christmas tree into my home after almost 20 years of marriage–but that’s another story entirely.)

Perhaps to the consternation of many hard-core traditionalists, our family will continue to celebrate the spring holidays in our own special “interfaith” way. 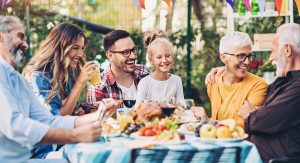 Jewish Grandparents: Here’s How to Talk About Passover and Easter with Your Interfaith Family