I know the obvious connection between Jews and St. Patrick’s Day is corned beef. But that seemed like the safe choice for this week’s post, and I was feeling adventurous. I was also feeling like drinking beer. 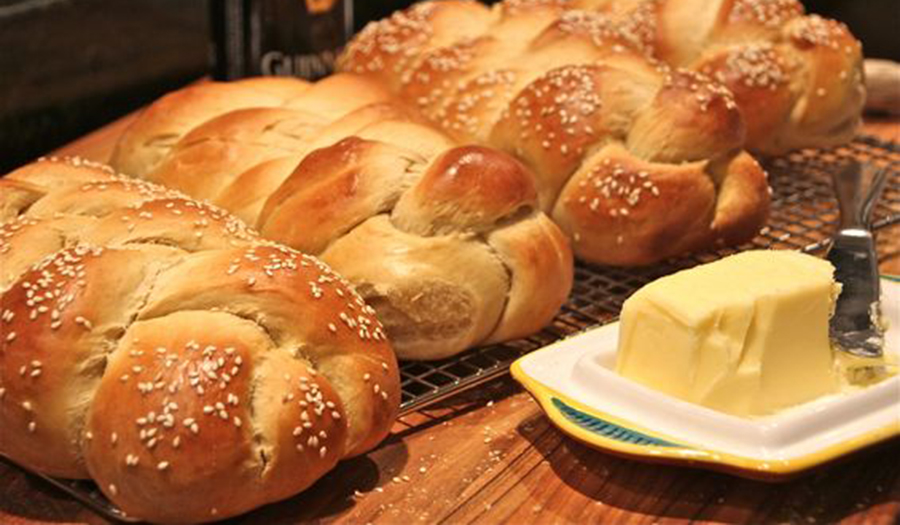 So when I googled “Jewish recipes for St. Patrick’s Day,” I wasn’t expecting much besides the aforementioned corned beef recipes and maybe some random tips on how to incorporate green food coloring into traditional Jewish dishes. But the luck of the Irish was with me. In the middle of my search—as if sent from a leprechaun himself—a dear friend sent me an email with the subject line, “Jewish take on St. Patty’s.” She had sent me a link to a recent post on a blog called She Makes and Bakes, in which the blogger had introduced her recipe for Guinness challah. Um, genius.

I love cooking with beer. (I’ve made this beer ice cream recipe several times and it’s always a huge hit.) But I’d never tried baking with it—and I’m not a confident baker to begin with. So for my version, I decided to use a trusted recipe as the base—Claudia Roden’s challah recipe from “The Book of Jewish Food”—and work Guinness into it as part of the liquid in which you dissolve the yeast.

This worked really nicely. The challah has no hint of booziness (I might use all beer next time instead of cutting it with water, or even reduce it to concentrate its flavors), but the Guinness certainly lends the challah a pronounced sweetness.

1. In medium bowl, stir together water and Guinness. Dissolve yeast and 1 tablespoon of sugar in water-beer mixture and set aside until foamy, about 10 minutes. Meanwhile, grease a large bowl and two baking sheets with cooking spray and set aside.

2. Using a kitchen spoon or stand mixer, beat 4 of the eggs in another large bowl, then beat in salt, remaining sugar, and ½ cup oil. Add yeast mixture and beat until well combined. Gradually add flour, mixing until dough is stiff.

3. Using dough hook or your hands, knead dough until smooth, about 15 minutes. Shape dough into a ball and transfer to prepared bowl. Cover with a damp kitchen towel or plastic wrap and set aside, in a warm spot, to let rise until doubled in bulk, about 1½ hours.

4. Turn dough out onto a very lightly floured surface, divide into 12 equal pieces, and shape each into a ball. Set dough balls aside about 2 inches apart, cover with a damp kitchen towel or plastic wrap, and let rise for 10 minutes. Then roll dough balls into 12-inch long ropes.

5. To make the six-strand braided loaves, line up six of the ropes lengthwise on each large baking sheet, or, to make the three-strand braided loaves, line up three of the ropes lengthwise on each medium baking sheet. Position baking sheets perpendicular to you. Join ends of ropes at top of baking sheet and pinch together. Braid each loaf, join ends of rope at bottom of baking sheet, pinch together, and tuck ends under on both ends of loaves. Loosely cover loaves with damp kitchen towels or plastic wrap and let rise for 15 minutes. Meanwhile, preheat oven to 350 degrees and set oven rack in middle position.

6. Beat the remaining egg and 1 teaspoon water together in a small bowl. Brush tops of loaves with some of the egg wash, sprinkle with poppy and sesame seeds (if using), then bake until loaves are deep brown and hollow sounding when tapped, 45-60 minutes. Set loaves aside on rack to cool.

Reprinted with permission from JewishBoston.com.

Mari Levine is a freelance food writer and an editor for America’s Test Kitchen, where she combines her journalism and culinary degrees from Brandeis University and Johnson & Wales, respectively, with her restaurant and lifelong eating experience. When she’s not working hoisin sauce into everything she eats or binging on anything sandwiched between two slices of bread, she can be found on her bike, engrossed in a documentary, or playing sports that involve throwing and/or catching a ball (the latest: flag football).