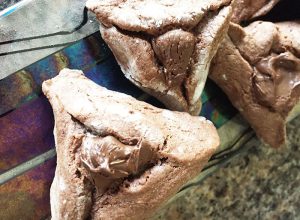 Hamentaschen or “Haman’s Pockets” are the traditional dessert of Ashkenazi Jews on the holiday of Purim. Originally containing poppy seed filling in medieval Germany, it later became popular to fill the Hamentashen with prune filling. This tradition was started in 1731 to honor a Jewish prune jam merchant named David Brandeis. David was acquitted after being charged erroneously with trying to poison the magistrate of Jungbunzlau in northeastern Bohemia (now part of the Czech Republic). To celebrate his acquittal the people in his community filled Hamantashen with his plum jam and called it Poivadl (plum/prune) Purim. Today Hamentaschen are filled with many different flavors of fruit jams, nuts and even chocolate.

It is difficult for people suffering from Celiac Disease and others whose bodies are sensitive to gluten to participate in many food customs when one’s diet is restricted in this way. Creating recipes that allow people on restricted diets to participate fully in the enjoyment of Jewish culinary traditions is a very important goal of mine. The following two recipes can be made dairy free as well as  gluten-free if you so choose and it is delicious either way. Choose either to make chocolate cookie dough or traditional sugar cookie dough, both with delicious chocolate filling. Enjoy!

For your chocolate filling, you can either follow the instructions below, or use Nutella or Israeli chocolate spread Hashachar H’aole.

1.  Place butter and chocolate in a 1 ½ quart glass mixing bowl and microwave on 80 percent power for 45 seconds; if butter is not completely melted then heat on high for 15 more seconds. Stir contents of bowl until smooth.

2.  Whisk the sugar, extracts and salt into the chocolate mixture. Combine well to dissolve some of the sugar.

3.  Add eggs one at a time, whisking well after each addition.

4.  Add the rice flour and whisk until a smooth, shiny mass is formed and pulls away from the side of the bowl.

5.  Place mixture in a sealed container and refrigerate until needed. Filling will become firm but not too firm to scoop into little mounds for filling Hamentaschen.

Note: Chocolate often retains it shape when melted, so don’t over heat or it will burn. One tablespoon rice flour is equivalent to two tablespoons flour if gluten is not a concern and you don’t have rice flour at home. 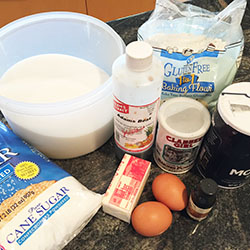 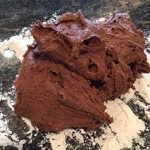 * For chocolate cookie dough, do not use almond extract, but instead use 1 Tbsp. vanilla extract. Instead of 2 cups flour, use 1 3/4 cup Gluten-free flour and 1/4 cup Dutch processed cocoa. 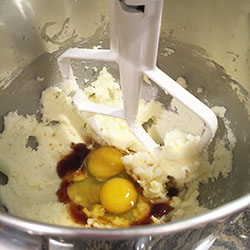 2.  Using an electric mixer, cream the butter and sugar together until thoroughly combined.

3.  Add the eggs, vanilla and almond extracts, and beat until lighter in color and fluffy.

4.  Combine the 2 cups flour, baking powder, salt and xanthan in a 1 quart bowl. Add to mixer bowl and mix on medium speed just until the dough starts to hold together. 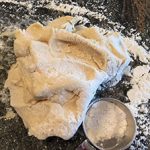 5.  Very gently knead the dough on a surface lightly floured with additional flour about ten strokes or until the dough is smooth and holds together. Cover with plastic wrap, flatten into a disc and refrigerate for at least 30 minutes.

6.  Place dough between two sheets of parchment paper or waxed paper that have been lightly dusted with confectioner’s sugar. Roll the dough out to about ¼ inch thickness.

Carefully remove one sheet of paper (you might have to scrape some of the dough off if it sticks) and then place dough side down on a board that is heavily covered with confectioner’s sugar. Carefully remove the paper on top and, if necessary dust with additional confectioner’s sugar and lightly roll to make the surface uniform in thickness. (NOTE: This is only necessary if dough was very sticky and pulled apart when removing paper.) 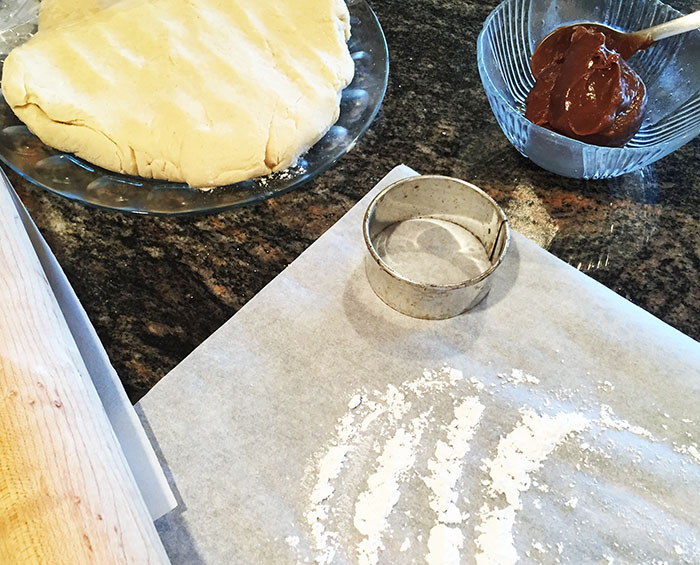 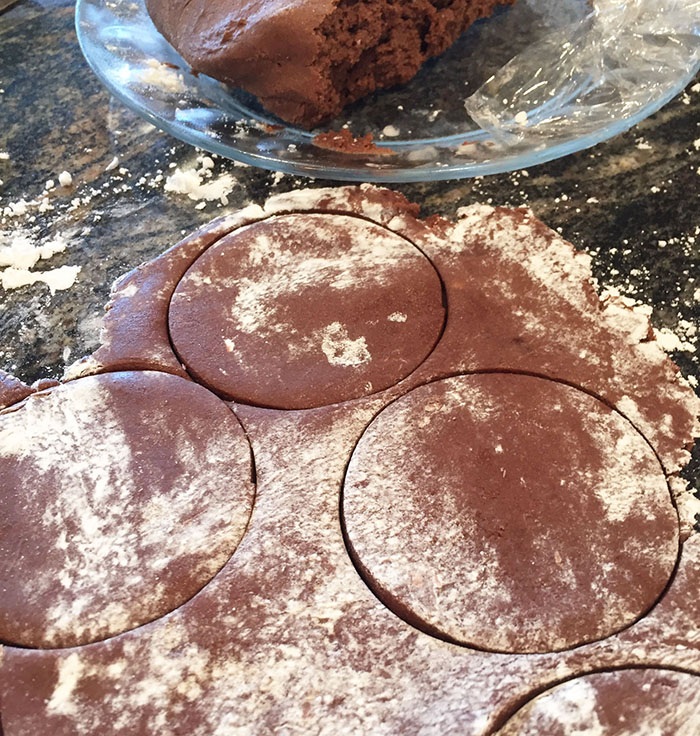 7.  Cut the dough into 2 ½ inch circles using the mouth of a glass. Place 1 scant teaspoon of filling in the center of each circle. Using your thumbs and forefingers shape the hamentaschen. Imagine the circle is a clock; place your two thumbs at 6 o’clock and your forefingers at 2 and 10. Gently bring your fingers together and you will have formed a perfect hamantashen triangle! Pinch the dough together so that the filling is exposed only at the top of the cookie. 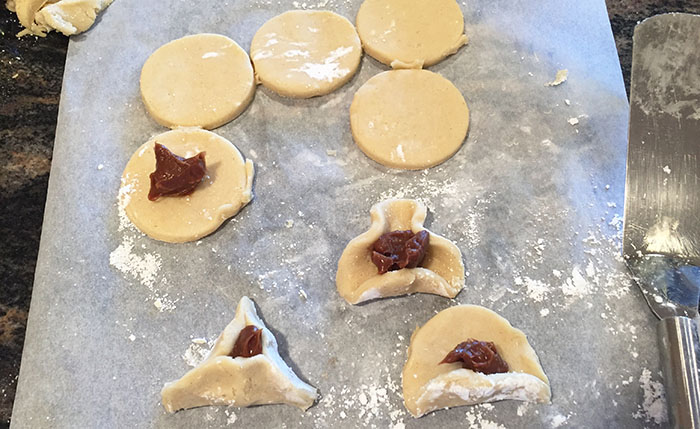 8.  Bake hamentaschen in the pre-heated oven for 10 minutes or until golden. Can be stored in a plastic bag or airtight container when cool or freeze for later use. Share with friends! Happy Purim! 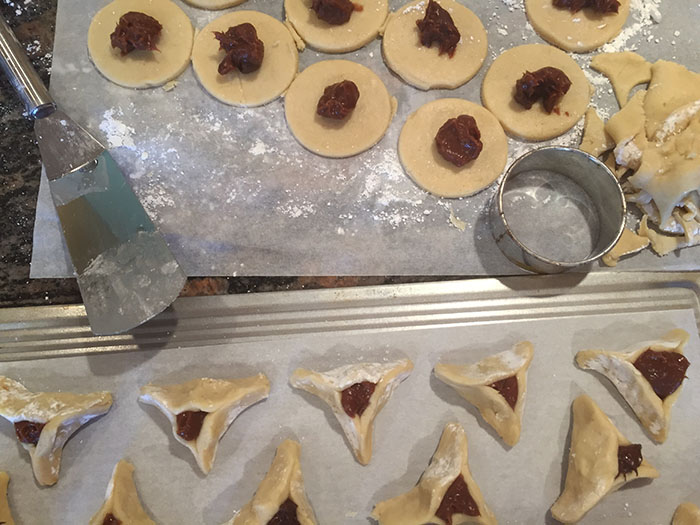 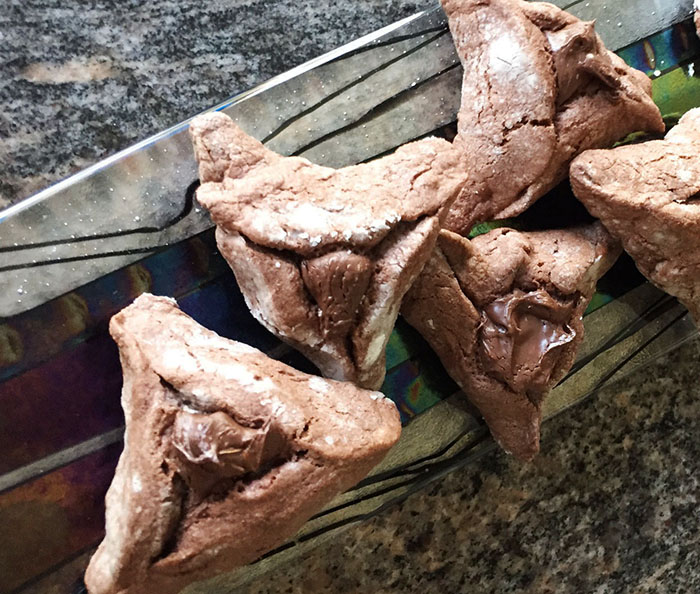