Sam and I got engaged in September and this blog is our place to share with you a little bit about us as individuals and as a couple. We continue exploring and learning about each other. I will be writing these blog posts in collaboration with Sam. 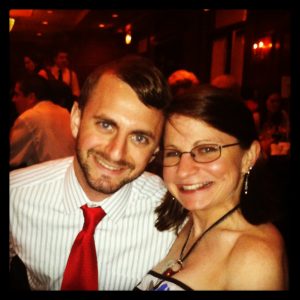 It was two years, this past weekend, since I started dating my fiancé, Sam. We met online and neither of us were particularly looking to meet someone from a different faith; it just happened. On our second date, religion and faith was the topic of conversation and we started recognizing the similarities of Judaism and Catholicism.

Sam grew up in an interfaith household. His father is a Reform Jew and his mother is a practicing Presbyterian. All three children were raised as Jews. Because of this, Sam is very connected to his faith: sitting on a few committees of the local Jewish Federation, frequently attending services, and involved with lay leadership at his synagogue. I, on the other hand, was raised in a religiously conservative Roman Catholic household. My nine siblings and I went to church every Sunday, received the Sacraments as often as we could, attended private Catholic schools, and pray often as a family.

In trying to write this first blog post about our upcoming wedding, we asked each other a few questions about how faith played a role in our dating experiences.

Have you ever dated someone who was of a different faith?

Sam had dated Jews and people who were not Jewish and it didn’t faze him one way or the other. He had even dated a Pastor’s daughter. I had only dated Christians before Sam, some more practicing than others.

Did your parents/family have any expectations of you finding a significant other within your faith?

Because Sam grew up in an interfaith household, there was minimal pressure on him dating outside his faith. Growing up, he expected to raise Jewish children; whereas my parents expect Catholic grandchildren. (Expect more on this topic in a future blog post.) Interfaith is brand new territory for my family. Growing up, my family’s circle of friends was from the private Catholic grade school and high school. I even went to a Catholic college, as did most of my siblings. I didn’t have many non-Catholic friends, until I went to a Mormon graduate school. Even then, my best friend was another Catholic.

When did your family realize/find out that your significant other wasn’t practicing the same religion?

For Sam this was a non-issue. It may have come up in casual conversation with his parents, but there wasn’t a specific time when his parents were shocked that I wasn’t Jewish. With me, it was quite different. In helping my mom prepare the Easter menu, I mentioned that I wanted to bring my boyfriend home and he had a few dietary restrictions. I offered to bring separate foods that were kosher for Passover, as to not put pressure on my family. We had only been dating for a few months, so I didn’t want to make it a big deal that he wasn’t Catholic. However, Mom told Dad, Dad told my brother Chris, who then told my sister Michelle, and shortly thereafter everyone in my family knew that Sam was Jewish.

The meal turned into my siblings asking Sam questions about Passover, his faith, and Judaism in general. Sam took this bombardment of questions like a champ! Sam joined us again for Easter this year and my family started embracing the kosher for Passover foods. My dear mom even experimented with matzah desserts! We said the grace before the meal and my Dad asked Sam to say his blessing, which he did in Hebrew. It was then, that my very conservative Catholic grandfather realized that Sam wasn’t Catholic. (Expect more on Sam’s relationship with my grandfather in a future blog post.)

Because you were dating someone of a different faith, did you have doubts about the relationship?

Sam didn’t have any doubts in being in an interfaith relationship because he saw his parents as role models. He had grown up practicing Judaism, but also experiencing major Christian holidays with his mom. My answer is not as simple. I did have doubts about overcoming the faith-related hurdles of our relationship. The more I would practice my own faith, the more I would struggle with our relationship. “How I could be with someone who didn’t believe in Jesus? How would we raise our children?”

When did you realize that this interfaith relationship would last?

We both realized this around the same time. I had surgery last summer with a very long and painful recovery process. It was during this time that we realized the power of our relationship. Sam was incredible. He was at my bed side every day, helped me go through physical therapy, saw me at my worst, and gave me strength. It was also during this time that my family realized how committed Sam was to this relationship despite our different faiths.

As we approach our October 2014 wedding, we look forward to sharing more about our relationship in this blog. We hope that you will follow our journey and that our stories will help you explore your relationships.

Tell us about your interfaith relationship. Are there any similarities to ours?