The biblical prophet, Elijah, is a major figure in the biblical books 1st and 2nd Kings. In Jewish tradition, Elijah is associated with the hope for the arrival of the Messiah and the ushering in of an era of peace, justice, and harmony throughout the world. The traditional Jewish belief is that Elijah will reappear one day, and the Messiah will follow soon after. More liberal Jewish theologies look at the idea of Elijah’s arrival and the hope for Messianic redemption in a non-literal way. For Jews with these beliefs, the entire tradition of hoping and waiting for the Messiah is a metaphor for the sacred obligation of all people to work for justice and peace and, in so doing, to help bring about a “Messianic era” of a world at one.

In a typical seder, a cup of wine, “Elijah’s cup,” is filled with wine or grape juice and set before an empty chair that remains empty throughout the seder. Toward the end of the seder, we are instructed to open the door for Elijah, and we collectively imagine his presence (and/or the ideals it represents) entering the room. Adults sometimes humorously challenge young children to inspect Elijah’s cup at the end of the seder to see if there’s any sign that someone drank some of the wine or juice.

In more recent years, many Jews have added a parallel ritual to Elijah’s cup. A cup is filled with water and set on the table near Elijah’s cup. This cup, Miriam’s cup, represents the biblical figure of Miriam, whom we meet in the book of Exodus and in other parts of the Torah. Miriam was Moses’ older sister, and she helped ensure that baby Moses was rescued when his mother was forced to send him adrift in the Nile River because of Pharaoh’s decree. Later, she led the newly freed Hebrew women in song and dance at the shores of the Red Sea. The Torah describes her as a prophet, and the ancient rabbis taught that, after the Hebrew slaves had been freed and then wandered in the wilderness for 40 years, wherever they encamped, a magic well with fresh water would appear, and that God made this miracle happen on account of Miriam’s righteousness. Because of these strong associations of Miriam with courage, liberation, and water, the custom of placing a ceremonial cup of water on the seder table in her honor has appealed to many Jews who value gender equality. This ritual honors the stories and contributions of women in Jewish tradition. 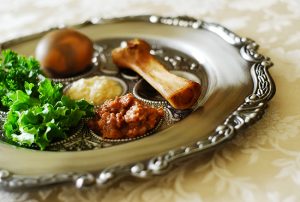 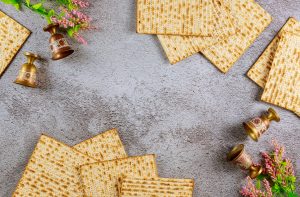