It is two days until our Hindu wedding ceremony, and my fiancé Jai and I are standing outside the Rama Krishna Mission where I am staying, in Calcutta’s hundred-degree humidity, arguing about translations. I am asking, for what feels like the hundredth time, for an accurate translation of the mantras I will be chanting during the four-day ceremony. Jai has been promising—and putting off—these translations for months, but apparently, it is not as easy as we’d originally thought. 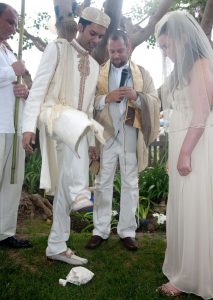 It turns out that there is not one generic Hindu wedding ceremony, but rather a precise set of mantras for each region, caste and specific lineage. He thought that once we arrived in India it would be easier track down translations from the local priest, but unfortunately the local priest actually lives in a remote village on the outskirts of the city, has no cell phone and can only be reached during certain times of the day on the communal village phone, which is almost always busy. And, as Jai painstakingly explains to me, there are no simple, ready-made English translations for a four-day ceremony.

This is not our first wedding. Six weeks earlier, we were married in a Jew-ish wedding ceremony on the canals in Venice, California, a few miles from where I grew up. I say Jew-ish, because while it was rooted in Jewish culture and included many elements of a traditional Jewish wedding, we’d devoted months to crafting the language of our ceremony to make sure it was a precise reflection of who we were as a couple.

Since Jai is not Jewish, and has no plans to convert, it seemed false to recite the traditional blessing for the ring exchange: Haray aht m’kudeshet li b’taba’at zu k’dat Moshe v’Yisrael, which translates as By this ring you are consecrated to me in accordance with the traditions of Moses and Israel. Instead, we wrote our own blessing, recited in both Hebrew and English: With this ring I consecrate myself to you by the universal laws of love. During thesheva brachot, the seven blessings, we invited Jai’s parents and sister to recite Sanskrit verses that were close to the meaning of the traditional Hebrew blessings, because we wanted to honor and include his language and culture, and because we wanted our guests to understand that although this was a predominantly Jewish ceremony, it was also the marriage of two rich and ancient traditions. 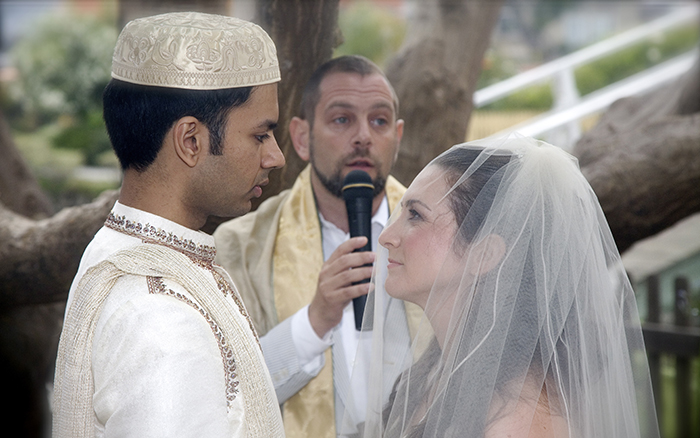 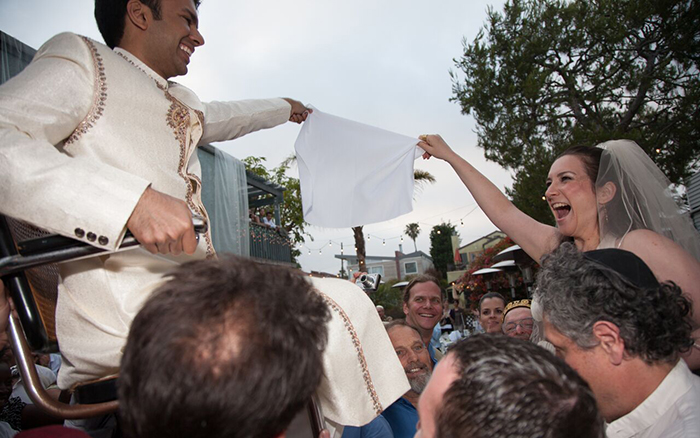 So you can imagine my annoyance when two days before the Hindu ceremony, I still had no idea what it was that I was actually going to be saying. The year before, we had come to Calcutta to participate in Jai’s sister’s wedding. Though born in Calcutta, Sukanya was raised in the United States and holds a doctorate in astrophysics from Berkeley. Going in, Sukanya was already skeptical of some of the rigmarole that the traditional Hindu ceremony required—three different heavy-silk, embroidered saris, yellow paste smeared on the face and more than a dozen intricate rituals to bind her to her chosen mate—ceremonies that were not necessarily reflective of the quieter, more stripped down Hinduism practiced by her family growing up. Yes, there were the small altars around the house with statues of Durga and Ganesha, but the most important ritual was the daily recitation of the Sanskrit verses their father demanded. Add to the equation the fact that Sukanya was marrying a nice, Bengali young man who, although he cooked a perfectly delicate hilsa fish, believed in the intricate rituals of his born religion about as much as he believed in the tooth fairy.

Throughout their four-day ceremony (which I studied intently, knowing that I might soon be going through it myself), I occasionally noticed Sukanya grimacing, or calling her father over and whispering to him with agitated gestures. When I asked her later what was wrong, she explained that unlike most contemporary Indian brides, she could actually understand the Sanskrit verses she was reciting and they contained some pretty paternalistic sentiment. “I can’t believe I am supposed to repeat this crap about thanking my husband for taking over the burden of taking care of me from my father!” she hissed.  “Elana, you and Jai shouldn’t even have an Indian wedding. Just do it in America. Then you won’t have to go through all of this nonsense.”

As a cultural and religious outsider joining the family, I didn’t really think that was an option. Can you imagine me telling my soon-to-be Indian mother-in-law that her only son wouldn’t have a traditional Hindu ceremony? Plus, I was already picturing myself in a flowing red silk sari. And, although I was not thrilled about the chauvinistic element that Sukanya had revealed, most organized religions are patriarchal in origin, and their marriage rituals reflect that. Judaism is no exception. The traditionalketubah, the Jewish marriage contract, includes a promise from the husband to present the bride with “the marriage gift of virgins, two hundred silver zuzim” in exchange for her promise to live faithfully according to the laws of Moses and Aaron, and bring the agreed upon sum of silver, gold, and valuables from her own father’s house. Sounds like a sale to me.

Even more than my concern with an antiquated, patriarchal ceremony was my secret, deep-seated fear that I was going to unknowingly end up invoking some god or goddess that wasn’t mine. That somehow, by reciting these ancient Hindu mantras, I would be betraying my God, and therefore my essential Jewishness.

As Jai and I stood outside the Rama Krishna Mission, trying to resolve this frustrating circumstance, I realized I had a choice. I could hold my ground on principle, and spend the last days before our wedding in a state of tension and frustration over what I could not control, or I could jump into this ceremony on faith and with the clarity of my intention to honor my soon-to-be-husband’s culture. I knew that no matter what words I would repeat during the ceremony, we would be invoking the love we have for each other, and honoring the values that are important to us, whether connected to our cultural heritage, spiritual practice or to something as mundane as who is going to take out the trash.
On the day of the ceremony we wake at dawn in our separate residences. I am brought to the wedding house and dressed in an elaborate red silk sari and made up to look like a combination of Bollywood starlet and a Hindu goddess. When I come out, they seat me in a red velvet wedding chair to wait for my turn to participate—which turns out to be not for a long time. In the Hindu ceremony, it is the father of the bride who actually has the most to say and do. And my father was a champion. He sat under the wedding tent on a white mat, dressed in a white dhoti with a red-checkered cotton shawl around his neck, repeating Sanskrit verses after the priest for hours. Watching the delight my musical father took in pronouncing these foreign phrases helped me relax and be present for the ritual. Although I did not understand every word, when Jai and I threw the fragrant jasmine garlands around each other’s necks, circled the fire together seven times and tied his clothing to mine, the metaphor was clear.

It would resemble a fairy tale rather than life if I ended the story here, if I implied that after that powerful and exhausting ceremony, and the compromises we each made to get through it, everything fell into place and the struggles of being an inter-faith couple faded into the sunset. In truth, the negotiations continue, some more painful than others. Whereas in India I felt that I was the one who ended up compromising more, in our day-to-day life, it is Jai who is consistently being asked to include more and more Jewish ritual into his life.

We celebrate Shabbat on a weekly basis, either in our home, with friends or with our beloved local Hassidic rebbe. Jai accompanies me to Rosh Hashanah, Yom Kippur and other Jewish holiday dinners and services. In the beginning, I think Jai came for my sake, so I would not have to be alone, since Judaism is such a communal religion. And while Jai is very clear that his is a Hindu soul, he acknowledges that his life has been enriched by his experiences with Jewish culture and practice. 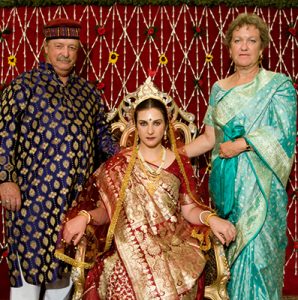 As far as my participation in Hinduism, as I mentioned, Jai’s family’s practice is more philosophical, internal, and text-based, than communal. In fact, when we were traveling in India I would eagerly go into each temple, leaving my shoes at the threshold and braving the dirty water littered with petals, while Jai waited outside for me to return, forehead sticky with the remnants of a priest’s blessing. Early in our relationship, Jai would tell stories from the Bhagvad Gita and the Ramayan so intimately, it seemed that he’d been born knowing them. Besides making me fall more in love with him, being exposed to these stories through his eyes has made me want to have a deeper understanding of my own sacred stories, and wish that I was as versed in the Torah as he is in the Hindu sacred texts.

A few days after our Hindu ceremony, on a train heading from Calcutta to Delhi, still reeling from the four days of intense festivities, I asked my father how he, a Conservative Jew from California, felt about all the Sanskrit he’d had to recite and if any of it had made him uncomfortable. He paused for a moment and said, “Well, the way I see it, Sanskrit is a holy language, like Hebrew. The sounds felt familiar in my mouth, even though I didn’t know exactly what I was saying. And as I was speaking, I just kept focusing on my love for you and Jai, and my blessing that you should have a long and happy marriage.” I can’t imagine any God that I would call mine taking issue with that.

Elana’s debut collection of poetry, Eyes, Stones (LSU Press 2012), was selected as the winner of the Walt Whitman Award from the Academy of American Poets, and brings her complex heritage as the granddaughter of Holocaust survivors to consider the difficult question of the Israeli-Palestinian conflict. She is the recipient of grants and fellowships from the Jerome Foundation, the Edward Albee Foundation, and the Brooklyn Arts Council. Her writing has recently appeared in AGNI, Harvard Review, and the Massachusetts Review, among others. Elana was a finalist for the inaugural Freedom Plow Award from Split This Rock, an award which honors a poet doing work at the intersection of poetry and social justice. To find out more about her work, please visit: www.elanabell.com.