The days prior to my son Julian’s bar mitzvah service I worried about how my non-Jewish mother-in-law was digesting all this Jewish “stuff” that preceded the actual Shabbat service. I kept wondering if she was uncomfortable or unhappy or wishing she hadn’t come. Previously, she had always declined to participate in any Jewish activities or holidays. 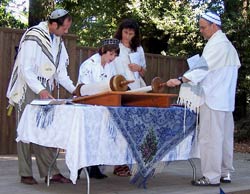 On the morning of the service, my nervousness grew as I greeted my non-Jewish friends. I worried how they would all enjoy the service, which I knew would be long and foreign to all of them.

I needn’t have worried. The Jewish Renewal movement has such a welcoming feel that anyone would be pleasantly engulfed by its warmth and inclusiveness. The siddur (prayer book) I had prepared offered every prayer in both English and in Hebrew, as well as in transliteration, and the Torah portions and Haftarah portions had English translations as well. In addition, the service was well balanced between the two languages.

We began with a salute to the four directions, a touch my son, Julian, had wanted to add–a drum to the north, bells to west, a singing bowl to south, and Julian blowing the shofar to the east. Then, lots of songs of praise and blessings with drums and guitar and dancing so everyone could get into the Sabbath mood. We gave Julian the tallit he created, and he explained the symbolism he had placed upon it–things anyone could understand since they came either from his life as a dancer or from the Old Testament.

Before we began the actual Torah reading, Reb Eli asked if anyone who had never had an opportunity to see a Torah up close would like to do so. He didn’t distinguish between Jew or non-Jew, which some rabbis might have done, but instead encouraged anyone who wanted to come up to the bima and look at the Torah to do so. All my non-Jewish friends went up and were excited to see the Jewish sacred text and to learn about it. My mother-in-law, however, stayed seated, since Reb Eli had given her a private viewing during the rehearsal a few days prior, an experience that she felt honored to have had.

Reb Eli, Julian and I had planned several group aliyahs. In most synagogues, only Jews are allowed to say these blessings before the Torah reading. Reb Eli, however, voiced no rules and my friends felt so included and comfortable that for each group aliyah several of them walked back up to the bima to participate in the blessing, which had been included in transliteration in the siddur. I thought at first to run up and tell them they weren’t allowed to participate, but Reb Eli seemed not to notice, so I stayed seated. No one seemed to mind, and they were respectful of the honor.

In another nontraditional twist, my son completed his drash, his commentary on the Torah portion he had read, by dancing his Torah portion. He had choreographed a piece to a song that spoke words from his portion, and Jew and non-Jew alike enjoyed this unique display of creativity and spiritual expression.

Near the end of the service, my husband led the Mourner’s Kaddish, the prayer said to commemorate those who have died. I knew this would be emotional for him, and I wondered how his mother would react, since her husband had died just four months before. She knew nothing of the Jewish practice of actually saying a prayer to remember those who have died. My husband stood and, with tears streamed down his face, told of how he was moved by the fact that this prayer says nothing of mourning but only praises God. As he stood there crying, I put my arm around his mother, who was standing beside me crying as much for the memory of her husband as at the sight of her son expressing how much he missed his father. That he was doing so in a Jewish context reciting a prayer in Hebrew, didn’t matter at all–not to her, not to him, not to anyone. We all cried–everyone there that morning–together, and it didn’t matter what religion we followed or in what religious context we were remembering this man or anyone else who had recently passed away.

Much later when the service was over and lunch had been eaten, one of my non-Jewish friends and her husband came to tell me they were leaving. “Can we keep this siddur?” her husband asked. I remembered that he didn’t enjoy participating in any type of formal religion.

After almost all the guests had left, one of my other non-Jewish friends approached me. “I’ve had the best time,” she said as she hugged me. “I felt so welcomed into your religious community. And I want you to tell me more about Judaism some time and maybe take me to some other service.”

“I’d be happy to,” I replied. I watched her walk away, a little surprised, since I knew she was well-entrenched in her own church and her own religion, but happy that her first experience of Judaism had been so positive.

Back at home, my mother-in-law confessed, “I’m so very glad I decided to come and share this day with all of you. I really, really enjoyed myself. I loved meeting all of your friends, and seeing Julian dance and read from the Torah. It was really wonderful.”

I smiled, took a deep breath, let it out, and relaxed, realizing there had been nothing to worry about after all.

Nina Amir Lacey is a freelance journalist, nonfiction editor and the author of several booklets about practical spirituality, human potential and personal growth from Jewish perspective. She sees herself as an “everywoman” and her work as crossing religious and spiritual lines. She also serves as the spirituality and holiday expert on Conversations with Ms. Claus, a weekly podcast downloaded by 85,000 listeners each month in 90 different countries and offered on www.yaktivate.com. You can learn more about Nina at Pure Spirit Creations.