Does Hanukkah Need an Elf on the Shelf? 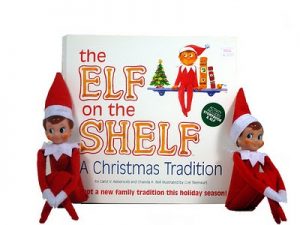 Growing up I was one of the few Jewish students in my school. I enjoyed going to holiday parties at my friend’s house, helping them decorate their trees, wearing a red and white Santa hat while passing out gifts, etc. I knew I was helping them celebrate their holiday while at home we celebrated Hanukkah, with our own traditions.

To be honest, I had never heard of the Elf on the Shelf until last year when friends posted daily pictures of their elf, Elliot, and his antics around the house. Somehow I hadn’t even noticed the elf kits at the stores until December 2012. Where had I been? My friends were so creative; I made it a point to go on Facebook each night to see what their elf was up to! In the past 30+ years, I don’t think I’ve ever been jealous of a Christmas tradition, until then.

I was a little jealous. I wanted an Elf on the Shelf! I didn’t even have children, but the idea of having fun creating poses and scenes for the elf each night was intriguing! Today I continue to celebrate Hanukkah, not Christmas, and I don’t know how I would introduce an Elf into our Hanukkah traditions. 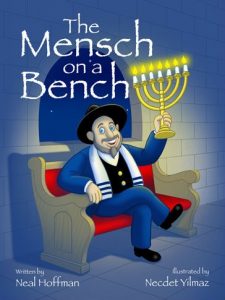 Enter Moshe, the Mensch on a Bench! Last spring I found a post on Kickstarter that Neal Hoffman, a former Hasbro Toys employee was trying to launch his Mensch on a Bench concept. I wasn’t sure what to make of it at the time. Remembering my own elf envy, part of me loved having a Jewish response. However, part of me likes keeping “religious” traditions separate. I wondered to myself, is this good for the Jews?

The Mensch on a Bench website offers a glimpse into Moshe’s story. Like the Elf on a Shelf (and the Maccabee on the Mantel, another Jewish response which we also recently blogged about), the Mensch on a Bench comes with his own story book. On page four he introduces himself to Judah Maccabee and offers to watch over the menorah to make sure it doesn’t go out while everyone else gets some sleep. I wondered, why is Moshe dressed as a modern religious Jew (with suit, tallit and large-brimmed hat) while Judah and the Maccabees are wearing more traditional clothing for the year in which the scene took place, 165 bce? Shouldn’t Moshe, the Mensch, be wearing clothing like his Maccabean contemporaries?

I also wonder if Hanukkah is the appropriate holiday for a Mensch on a Bench. According to the Jewish Virtual Library website, “Chanukah is probably one of the best known Jewish holidays, not because of any great religious significance, but because of its proximity to Christmas. Many non-Jews (and even many assimilated Jews!) think of this holiday as the Jewish Christmas, adopting many of the Christmas customs, such as elaborate gift-giving and decoration. It is bitterly ironic that this holiday, which has its roots in a revolution against assimilation and suppression of Jewish religion, has become the most assimilated, secular holiday on our calendar.” 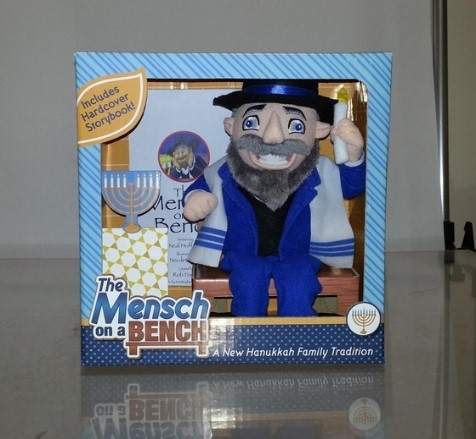 As the most assimilated Jewish holiday, a Mensch on a Bench makes perfect sense. But I think I’m more of a Maccabee, and I want to rebel against assimilation. Perhaps Passover is a more appropriate holiday. Although Passover is not a gift-giving holiday, I could see a Mensch on a Bench watching over the cleaning of the house for Passover, or during the week of Passover, keeping an eye on the children to see if they eat matzah or bread. I could have fun with that, I think. Further, rule #2 for bringing a Mensch into your home is to add more “Funukkah into Hanukkah.” Hanukkah is already a fun holiday! What holiday needs fun more than when we’re eating matzah that tastes like cardboard and remembering that we were slaves in Egypt?

All this being said, my favorite is rule #7, “One night of Hanukkah don’t open presents yourself, instead buy presents and give them to people in need. Remember that a true Mensch is one who puts smiles on other people’s faces.” What a great rule—for any time of year!

The Mensch on a Bench seems to mimic the Elf on a Shelf and its whimsical fantasy; whereas the creators of the Maccabee on the Mantel state: “Toy Vey’s ambition, and expectation, is that together families will create a joyous custom that ignites a child’s excitement about their heritage as well as their desire to learn more about who they are and where they come from. This little Maccabee represents a safe and soothing place for all children; he is a friend, a protector, a symbol of their lineage and a smiling nod towards their future. ” I appreciate their desire to hold true to the story of Hanukkah, while infusing new traditions. It feels more natural, to me, than introducing an elf replacement.

Our Hanukkah Booklet sums up my thoughts, “New customs evolve with each new generation. Repeat the traditions that appeal to you and add your own new variations on the themes of Hanukkah: bringing light into dark places and renewing your dedication to teaching and living meaningfully.”

As I’m expecting my first child (due in early December, right after Hanukkah), and since the Mensch on the Bench has already sold out for 2013, I can’t introduce Moshe this year. I wonder if we will one day have a Moshe, a Maccabee, or neither in my house. I’m confident my family traditions will evolve over time and with the addition of children.

What will you do? Will you have a Maccabee on your mantle, will you pre-order the Mensch on a Bench for 2014 or do you think we should stop trying to make Hanukkah more like Christmas?