Creating a Comfortable Bar or Bat Mitzvah for Interfaith Families: Some Thoughts

When it comes to Jewish celebrations, every family is an interfaith family. That is, every family combines different backgrounds, expectations, memories and baggage. Sometimes the gap between the two families is narrow and hardly noticeable; other times it looms and threatens to become another family member to be placated.

Bar and Bat Mitzvah are the kinds of celebrations that appear to feature the child first and the family second. Whether preparing for the service or the party, the child ought to be at the center, but at the center of what? The center of a synagogue community, ideally, in which she or he suddenly receives recognition as a member who “counts” — counts in the minyan (number of people needed to read from the Torah), counts as a skilled reader of Torah or service leader, counts as a voice in the congregation, an individual with needs beyond childcare. From a rabbi’s perspective, that is the “achievement” of the Bar or Bat Mitzvah ceremony, not a performance, or a show, but a welcome to a new young adult who is ready to take on more Jewish responsibility as a caring and contributing member of the community.

But we also know that the Bar or Bat Mitzvah event brings families into focus, highlighting joys and sorrows, those who attend and those who are absent, those who feel “comfortable” in the service and those who don’t. Attending to family needs, from hotel rooms to place cards, can enter the foreground, often overshadowing the message and the meaning of the simcha (celebration).

There are two sets of people to consider, the immediate family and the guests (everyone else). The immediate family, including parents of the Bar or Bat Mitzvah should, wherever possible, have special roles in the service. First, find out what parts people of other faiths can play in your synagogue. Remember, every synagogue is different, even within a particular Jewish movement or denomination (Reform, Conservative, Reconstructionist…). For example, in many Reconstructionist congregations, people who are not Jewish can take non-speaking parts, like opening the ark or wrapping the Torah, or can lead English readings, but may not lead the congregation in the Torah blessings or other prayers that assume a commitment to Judaism.

The key is what is appropriate, both from the synagogue’s point of view, and the point of view of someone who has not declared membership in the Jewish people. Sometimes, a parent is simply a proud parent and doesn’t need to play a religious part, just a family part. In many synagogues, a parent who is not Jewish will join the family group on the bimah (platform) for the rabbis’ blessing. In other cases, one parent participates in the ceremony while the other takes the limelight at the reception.

Ask the rabbi how the family can be treated as an organic unit — as much as the synagogue will allow, and as much as the parent who isn’t Jewish is willing! For example, often parents are offered an opportunity to speak to the child, and one does not necessarily have to be Jewish to do this. In some synagogues, both parents can come up to the bimah for an aliyah (honor of reciting a blessing before the Torah reading). The Jewish parent may recite the blessing, which is an affirmation of Jewish commitment, while the other parent may stand by their side.

Most Bar or Bat Mitzvah services today will have people of different faiths as guests. In an interfaith family, many of the guests who aren’t Jewish will undoubtedly be close family. Here are a few ideas for trying to help them—with the understanding that different people will respond to your efforts in different ways.

Rabbi Barbara Penzner is a Reconstructionist rabbi servingTemple Hillel B'nai Torah in West Roxbury, Mass. She is also the mother of two children who teach her every day.

Rabbi Barbara Penzner is a Reconstructionist rabbi servingTemple Hillel B'nai Torah in West Roxbury, Mass. She is also the mother of two children who teach her every day. 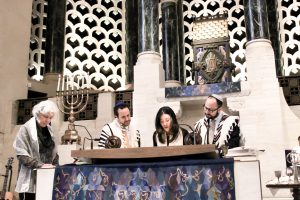