Counting our Blessings at Thanksgiving

This is the year. For the first time in our family’s history, both sides will come together, in some sort of détente, to fight over the wishbone.

Ever the gracious hostess, I will make sure my guests are comfortable and accommodated in my home. I’m making my list of needed ingredients; I’m getting out the linens to iron and the silver to polish. I’m making sure there are enough chairs and gravy boats. I’ll make both cornbread and rolls; we’ll make one turkey on a barbecue and one turkey in an oven. I’m planning on three types of pie and eight sides, just to make sure everyone is happy. I think I’ve got it worked out how we can serve wine and a non-alcoholic alternative without it being a problem. I’ve got cranberries eight different ways to satisfy the palettes involved.

As crazy as it sounds, all this is easy compared to the big question lurking for that Thursday meal. The one thing that has me sitting on a time bomb is the blessing. Just how are we going to say grace this year? And how do we do this with so many different views of God sitting at my Thanksgiving table?

We’ll have a full house of people that, besides having had different memories that form how they like their Thanksgiving, all have varying religious opinions on how degrees of Catholicism and Judaism forming how a blessing should be said, or not said, over this important family meal.

For years my husband and I have shuttled between family homes, alternating each year so that we were never in the position of racing across town in crazy southern California traffic to try to eat two dinners, complete with double the calories. Outside of the Fourth of July, and a few other secular holidays like Labor Day or New Year’s, this is the only family-oriented holiday that my husband and I share.

This took a bit of wrangling at first. My mother-in-law complained to my boyfriend, later husband, that my parents got us for Christmas (Thanksgiving being the gateway holiday to a season of over-gorging), so she should get us for Thanksgiving. My husband, in rare form, pointed out that my family didn’t get us for Hanukkah or Passover, and did she want to start dividing those holidays, too? That ended that discussion.

Christmas we spend with my family and Hanukkah with his. Easter egg hunts happen between my mother’s rose bushes, and hunts for the afikomen at each year’s seder happen between his parent’s bookshelves. But Thanksgiving has alternated between families for over 10 years, even after my daughter was born.

This year was my family’s year for Thanksgiving, and I told my mother on the day after Thanksgiving last year that, darn it, I was hosting Thanksgiving at my house this year. I received a full set of china, crystal, and silver as wedding gifts, and come hell or high water they were going to get used. It’s not my first time hosting it; I’ve cooked a bird and trimmings before. But this year when we invited my in-laws, they decided that instead of sitting at home with just themselves, they would join us. As did my husband’s uncle and cousins. For the first time, both families will be sitting down to Thanksgiving together. My brother, who usually has a few extra friends straggling to dinner with him, has said he’s not bringing anyone this year. He sees the potential for discord.

The years we’ve attended Thanksgiving at my in-laws, we’ve never said grace. Never. Not even a traditional grace-before-meals in Hebrew. While my in-laws attend an Orthodox shul, they are loosely Conservative in practice in the home. My father-in-law sometimes disappears before a meal, and I’m not sure if he’s doing his prayers by himself, but this doesn’t happen all the time. I’m not sure if this is because they treat it like any other meal in their house, or whether it’s a rejection of the Christian origins of Thanksgiving. Either option is equally as likely. My husband isn’t sure why they don’t say grace but explains, like many do about family traditions, “that’s just how it always is.”

My family has always said grace before special meals, whether it be Thanksgiving, Christmas, Easter, or even a special birthday dinner. Sometimes it was a formulaic blessing, “Bless us, Lord, and these thy gifts…,” and sometimes it was just an unstructured, “Thank you, God, for bringing us all together today….” We even said this on the Thanksgivings where we ate at a country club or restaurant because my mother decided not to cook (or polish the silver or iron the linens) in some sort of domestic protest. We said a blessing the year my friend brought her British husband (which we found funny, because hadn’t the pilgrims escaped the British?). We said grace the year another friend came to our house to escape her Chinese family’s version of Thanksgiving, complete with Tofurkey. And we said grace the year there were around 50 people stuffed into my Godparents’ suburban tract house, passing the ambrosia salad.

This year, there will be grace. No escaping the awkwardness by not saying it. Also, this will be the first Thanksgiving after my father has passed away, and we always remember our lost loved ones at Thanksgiving. This needs to be said, but how?

There is a prayer of Thanksgiving to Saint Anthony of Padua that Catholics say. There is the prayer Shehecheyanu, the Mizmor LeTodah, or the Modim in the Jewish tradition. The amount of squirming involved on either side of my family by thanking a Catholic Saint or ripping through the Hebrew would make for one awkward meal.

The solution, I think I’ve found, is in the holiday itself. The pilgrims gave thanks to God, and so should we. All the people at my table are there because their families came from somewhere else to this one place, but were still able to practice their religion as they chose. They were able to eat their potatoes mashed or in latke form, their cranberries made into a relish or in the shape of a can.

My daughter has just begun to read “big words” and I’ve found the Thanksgiving proclamation, as written by George Washington (or his speech writers), from 1789. I’ve also found the blessing written by John Adams that is carved into the fireplace mantel of the White House dining room. She will read, to all the members of her combined family, the words that remind us that we in this country may not share the same family history, but we do share the same historical background. One that thanks God for all our blessings.

I will say a short, informal, personal grace, giving thanks to God for all who are in our home and at our table, and to remember those who aren’t there. I will, as my husband puts it, omit “the J.C. bombs,” because while some people at the table believe the Messiah made an appearance, others are still waiting. There won’t be a beginning of “Baruch atah adonai…,” nor an ending of “we give thanks in Christ our Lord.” But there will be an acknowledgment that someone greater than my husband and I brought all these people together.

My daughter will share a meal with all the people who love her in the same room. There will be blessings to remind her of how this came to be; two very different families that years ago, across the seas, couldn’t have thought that their decedents would ever sit down to share this momentous meal. And thank God for it. 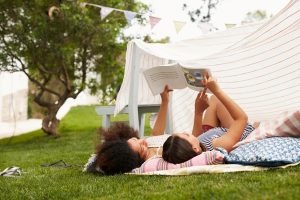