Celebrating the Beauty of a Hindu-Jewish Fusion Wedding

This story originally appeared in the Jewish Journal MA, and is reprinted with permission. 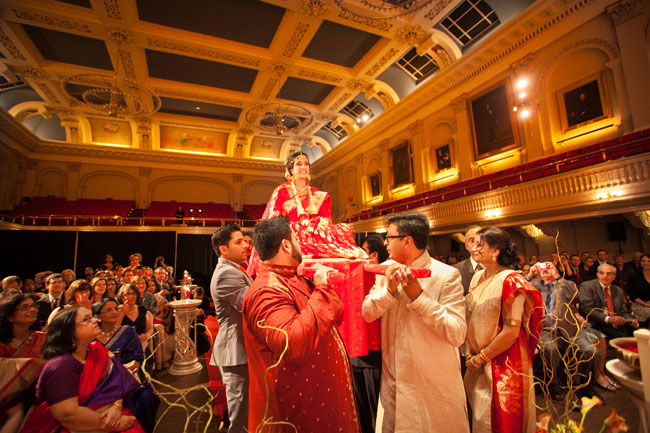 The wedding was fully Hindu and fully Jewish, all at the same time. Photo by David Tucker

UMass medical students Jhilam Biswas and Danny Barker met in 2006, before classes had even started. His undergraduate academic interest was anthropology; hers was sociology. They shared passions for world travel and global health issues, and both valued religion, culture and family. Jhilam is Hindu and Danny is Jewish.

Early in their relationship, they committed to learning about each other’s traditions, observing the High Holidays, Passover and Durga Puja with their respective families and friends. During their courtship they attended interfaith weddings that featured two distinct ceremonies—one for each religion. But when it came time to plan their own nuptials, Jhilam and Danny wanted to integrate their two unique cultures into one fused ceremony.

“Initially, Jhilam and I were both nervous,” Danny reflected. “Would the wedding feel ‘too Hindu’ or ‘too Jewish?’ Would we dishonor our traditions by mixing them together? Could we incorporate both cultures so that each family felt respected?”

Prior to their October 13, 2013 wedding, the couple engaged in many conversations with their religious officiants—Rabbi Lev Baesh of Austin, Texas, and Jhilam’s uncle, Dr. Ranen Chatterjee. 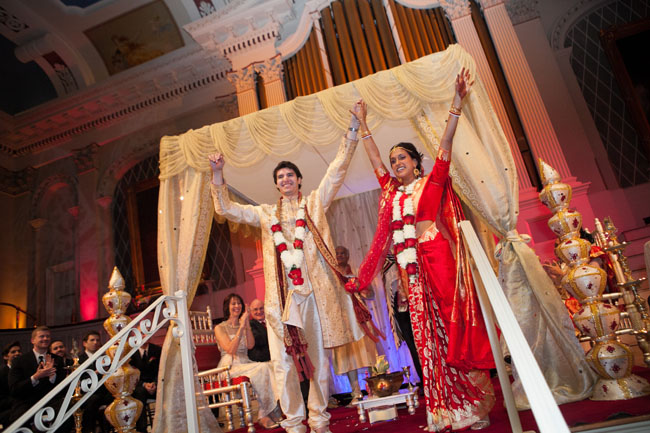 Danny Barker and Jhilam Biswas under their mandap/chuppah. Photo by David Tucker
The Jewish chuppah, for example, is a smaller version of the mandap, the Hindu wedding canopy. In both traditions, the number “7” carries symbolic meaning. In a Hindu wedding, the bride and groom circle a fire seven times; in traditional Jewish ceremonies, the bride circles the groom seven times. The Seven Blessings (Sheva B’rachot) and Seven Steps (Saptapadi) are key parts of each service. Finally, at the conclusion of the traditional wedding ceremony, the Jewish groom breaks a glass and the Hindu bride steps on a clay pot. Both rituals symbolize the strength, care, love and respect needed to nurture and protect the marital relationship.

For Sharmila Biswas, Jhilam’s mother, researching and planning her daughter’s wedding actually taught her something new about her own tradition.

“I did not have a baraat (Hindu marriage procession) at my wedding. It was not part of a Bengali wedding when Anup and I married in 1975. Today, every Indian wedding has a baraat. It is fun and gives people a chance to relax and feel part of the festivities. Through helping to plan this wedding, I was introduced to certain rituals of a modern Hindu wedding,” said Sharmila, who now lives in Norwell.

The baraat was actually a highlight of Jhilam and Danny’s wedding. Danny donned traditional Hindu clothing and rode a bejeweled horse down Worcester’s Main Street, all to the beat of the dhol (an Indian drum) and the rhythm of Indian music. The entire wedding party followed: dancing, clapping, laughing and kvelling.

When planning the wedding, the families met regularly to discuss ideas. There were difficult conversations, and compromises on both sides.

“The parents followed their children’s lead in what would be incorporated in the ceremony,” said Jeri Barker of Swampscott, Danny’s mother. “The planning process, and negotiating all the details, brought us all closer together.”

Anup Biswas, Jhilam’s father, agreed. “I always thought our families were very similar. It pleased me greatly to see so many of our wedding traditions intermingle with each other.”

Once the structure of the ceremony was sketched out, the couple designed a booklet for guests explaining the traditions and their meanings. Friends and family members contributed their unique talents and skills.

Dr. Peter Barker, Danny’s father and a passionate gardener, worked with the florist. “My neighbors, friends and I enjoy growing the big, beautiful, dinner plate dahlias,” he said. “I wanted to personalize the wedding flowers by including our dahlias. Some guests got a kick out of recognizing their flowers in the displays.”

Jhilam and Danny chose to be married in Worcester, the city where they met. They fell in love with the elegant and sophisticated Mechanics Hall, a beautiful Renaissance Revival concert hall built in 1857. For Jhilam, whose family has a long history of musicianship, the venue had special significance.

“In the months leading up to the wedding, I described the ceremony to my family and friends as ‘half-Hindu and half-Jewish,’” Danny said. “Looking back on it, that description doesn’t seem quite right. I now recognize it was possible for the ceremony to be fully Hindu and fully Jewish, all at the same time.”

Danny elaborated on this point.
“On the wedding day, I was raised onto a horse during a traditional Indian procession called a baraat, and my Hindu mother-in-law was raised on a chair during the hora. We had a wedding canopy with features of a chuppah and a mandap. My sister wore a beautiful saree from Bangalore, and my father-in-law wore a suit. It was a seamless blend — but most importantly, it was our own,” Danny said.
Jhilam agreed. “Wedding planning was a microcosm for relationship issues that got worked out earlier in our lives rather than later. In the end, we all came together and celebrated our hearts out, side by side,” she said.
Hindu Jewish Wedding, Jewish and Weddings, Weddings