Breaking Bread with the In-Laws

Last Friday night, I watched as my kids lit Shabbat candles and said the prayers at our table with my in-laws standing by. My partner’s parents are not Jewish, and I felt a deep appreciation for them in this moment. When we all met, none of us could have imagined this scene. Nearly two decades ago, I stayed at their home for the first time. My partner and I were graduate students on the East Coast and we headed west to see her folks at their ranch in central Oregon over break. Like many people, Jewish or not, they really aren’t into religion at all. Here we were, a rabbinical student and a PhD candidate in religious studies. We pretty much ate, drank and breathed religion.

I wanted to be careful not to overwhelm them with Jewish talk or Jewish practice. That was tough because I was starting to observe Shabbat and other rituals for the first time. I chose carefully which ones I absolutely had to do. One of my new, favorite Shabbat rituals was baking challah. As Friday morning rolled around, it felt strange not to make it. I started to get the ingredients out, and the implications ran through my mind:

1) This kitchen is going to be really, really messy.

2)  It would feel weird to me if we ate challah on Friday night without saying the prayer over it.  But saying it will feel really weird too.

3) Oh no…it will feel weird to do the prayer over the bread without doing all three Shabbat blessings.  Now it’s a full ceremony and it’s going to be awkward.

In the end, I did it anyway. The result? Wow, these people love challah. I know most people like it. What’s not to like? My recipe includes eggs, flour and tons of sugar and butter which make it more like a Shabbat dessert. It’s always a crowd pleaser. But I have never seen anyone so overtaken by it. Seeing how excited her parents were and knowing how worried I was about engaging in Jewish ritual in their house, my partner made sure they knew that getting to the challah meant that there would be Jewish prayers at their table. For people who really disagree with religion as a whole, don’t believe in the God we are thanking in these prayers and have no context for the foreign language being spoken at their table, this could have been a huge deal.

It’s been almost two decades, and I’m still making challah for my in-laws. Now when we visit, our kids help bake and decorate. We do the entire Shabbat ceremony consisting of all three prayers: lighting candles, saying kiddush over wine and grape juice and the motsi over the challah, my partner’s parents stand by, knowing that challah is coming.

I am greatly appreciative that my in-laws have been able to witness our family’s rituals and other religious choices. Clearly, some of these rituals have been easier to stomach than others. My mother-in-law enjoys the challah far more than she did the bris (then again, I’m with her on that one). It’s not easy when your kids choose a lifestyle so different from your own. In one sense, I credit the challah. It was one of the first moments when we came together around a Jewish custom, and unlike lots of other Jewish foods that are acquired tastes, challah was the one that could allow them to see into a completely new religious framework and even allow for it to happen at their family table. In a way, it’s just bread. But “breaking bread” together is also the way people from many cultures have traditionally and symbolically expressed that they can cross a difficult boundary. So maybe it’s no accident that this openness was instigated by a couple of loaves of home-baked bread. But at a deeper level, I credit my in-laws for demonstrating incredible openness to new ideas and most of all, for embracing us. That, and helping me clean the kitchen.

5-6 cups of flour
2-3 tsp. salt
1 package dry yeast or equivalent of 1 Tbs.
4 Tbs. sugar (yep, really) or try honey
1 stick margarine or butter (Butter is better…but for those observing the kosher laws, butter poses a problem if there is meat on the table. Oil can also be used.)
1 cup hot water (130 degrees or whatever the yeast you are using requires)
4 eggs 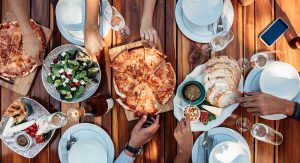