Bernie Sanders: American Jew, Not the Other Way Around 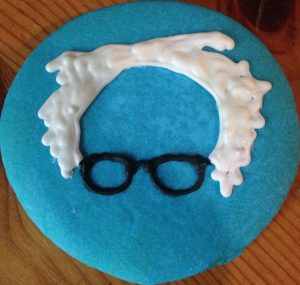 As my son and I watched coverage of Super Tuesday, I mentioned that regardless of whether or not Bernie Sanders got the Democratic nomination or won any states on this big voting day, he made history as the first Jewish presidential candidate to win a primary. As the results rolled in, I amended my comment, “He’s the first Jewish presidential candidate to win more than one primary. That’s cool.”

My 11-year-old responded in a sarcastic voice, “Of course, no one knows Bernie is Jewish.”

I was surprised by my son’s remark. In his younger, pre-tween days, he would have thought that a serious presidential contender who was Jewish was “awesome” and would probably have been pro-Bernie just because he was Jewish.

Now, on the cusp of teen-hood, he was more discerning and shrewd and often offered sharp analysis of situations and events–all good things. But his comment made me wonder if he was bothered by the fact that Sanders didn’t wear his Jewishness on his sleeve.

“Does it bother you that Bernie doesn’t talk about his Jewish identity more?” I asked.

I wasn’t convinced. “Do you think that because he doesn’t talk about being Jewish on the campaign trail that his Jewish identity isn’t important to him?” I probed.

“No. I’m proud to be Jewish, but I don’t talk about being Jewish all the time at school. But still, everyone knows I’m Jewish and if they have questions about Judaism or Jewish rituals they ask me.”

“Ok, well, maybe Bernie feels the same way,” I suggested. “My guess is that he is proud to be Jewish and would acknowledge he’s Jewish if asked, but feels he doesn’t need to talk about his Jewishness all the time. My sense is that he wants to talk about the issues facing our country and not about his faith or religious identity.”

My son didn’t respond. As I watched him think about what I said, I felt that while he agreed with it, there was something that bothered him about Sanders’ minimal display of his religious identity, but he couldn’t put into words what rubbed him.

It is likely that there are other Jews who, like my son, want Sanders to identify more strongly as a Jewish American. And there are probably many, who like me, are OK with Senator Sanders’ seeming choice to identify as an American Jew.

It was 56 years ago that a Democratic presidential candidate named John F. Kennedy asked the nation to see him as an American Catholic, not a Catholic American. In September 1960, at a time when anti-Catholic sentiment was high, Kennedy delivered a major speech to a group of Protestant ministers in Houston on the issue of his religion. An excerpt follows. You can read the full transcript here.

“While the so-called religious issue is necessarily and properly the chief topic here tonight, I want to emphasize from the outset that we have far more critical issues to face in the 1960 election: the spread of Communist influence…the humiliating treatment of our president and vice president by those who no longer respect our power; the hungry children I saw in West Virginia; the old people who cannot pay their doctor bills; the families forced to give up their farms; an America with too many slums, with too few schools, and too late to the moon and outer space. These are the real issues which should decide this campaign. And they are not religious issues — for war and hunger and ignorance and despair know no religious barriers. But because I am a Catholic, and no Catholic has ever been elected president, the real issues in this campaign have been obscured…So it is apparently necessary for me to state once again not what kind of church I believe in — for that should be important only to me — but what kind of America I believe in…I believe in a president whose religious views are his own private affair, neither imposed by him upon the nation, or imposed by the nation upon him as a condition to holding that office…But let me stress again that these are my views. For contrary to common newspaper usage, I am not the Catholic candidate for president. I am the Democratic Party’s candidate for president, who happens also to be a Catholic…”

For me, the fact that Bernie’s religious identity is a non-issue is as historic as his primary wins. Unlike Kennedy, Bernie can talk about the issues and not his religion. And that signals that even though there have been recent incidences of anti-Semitism and there are still country clubs and other organizations that excluded us, Jews have achieved the kind of acceptance that our ancestors who fled religious persecution in Eastern Europe, Russia and other areas of the world dreamed of.

After our conversation, I shared Kennedy’s speech with my son. After reading it, he said it gave the religious identity issue more context and he understood how it laid the groundwork for a candidate like Sanders. He said it didn’t bother him that Bernie didn’t speak about his Jewishness more often and he saw why it’s important to celebrate the success of this Democratic candidate for president, who also happens to be Jewish.