Being a Jewish Grandparent at Christmas Time 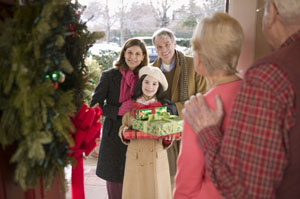 Being a Jewish grandparent of an interfaith grandchild is a tricky business. Some members of our community see intermarriage as diminishing Judaism—even though intermarriage has been part of our people since biblical times—and some simply desire to keep our families together and pass our values and traditions on to our grandchildren. Those synagogues that have truly welcomed the intermarried find that they add enormously to our community life.

If your children choose to bring your grandchildren up in another religion, you can explain that you would like to share your customs with your grandchildren and want them to know as much about Judaism as they will learn about the American Indians. Explain that you hope they will not only become knowledgeable about Jewish customs and values, but will also be friends of the Jewish people.

On the other hand, if your children are intermarried and choose to bring their children up as Jews we must show our appreciation for the time and resources they give to the Jewish education of their children. Too often, Jewish grandparents forget to thank their in-law children from other religions for the gifts they give the Jewish people.

Whatever our children decide, if we are to have any influence on our grandchildren we must be respectful of their decisions. It helps if we don’t put interpretations on their behaviors that are not true. For example, assuming the child is rebelling by marrying “out” when, in fact, s/he has been exposed to many people and fell in love. It is also wise to realize the other grandparents, too, have traditions that they want to pass on.

In America, it is the custom for the parents, not the grandparents, to make the religious decisions. If your children have decided to bring their children up with Jewish traditions, they still need to show respect for the machatunim (other in-laws) by attending Christmas at their home, much like most of us go to our office or friend’s Christmas celebrations. Children learn at a very young age that “this is Joey’s Birthday party and not mine,” and so too of holidays of the other grandparents.

Even if our grandchildren are being brought up as Jews, some may have a Christmas tree in their own home because one of their parents is Christian. These children will learn what is Mommy’s holiday and what is Daddy’s. Religion used to be a singular family affair; now individual choices are common. While this may seem difficult to understand, for at least a couple of generations, Jews have been negotiating variety in religious practice within one family.

The Jews are a tiny minority in the world, but we cannot allow our fears of dying out to subvert the flexibility and creativity required to keep our families together and to pass on our traditions in an open and complex society. Whether or not your grandchildren have a Christmas tree in their home, they are exposed to Christmas on the sidewalk, on the airwaves and in the mall. Let us use Christmas as an opportunity to teach our grandchildren that they can respect both their Jewish grandparents and their Christian family members.