Being Jewish (and Buddhist and Christian and Chinese) 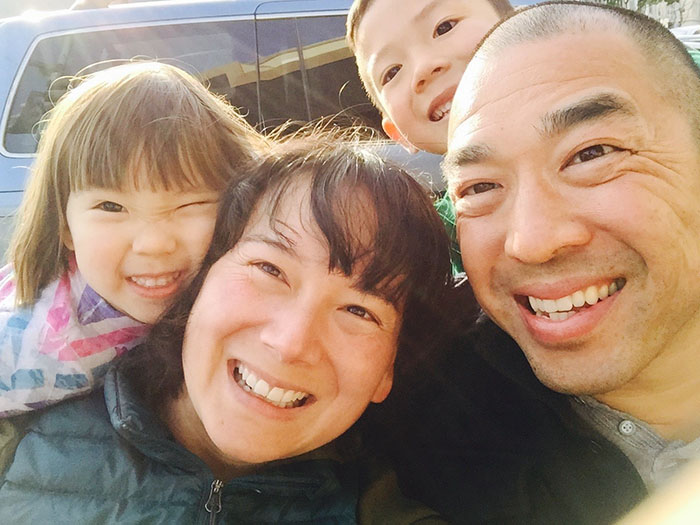 A good story is supposed to have a beginning, middle and end, right? Well, this story about being Jewish only has a beginning. Yep, I’m Jewish. Exactly 50% Ashkenazi according to my genome. And Jewish law says I’m 100 percent because my mother is Jewish—which also makes my kids Jewish.

I spent the first half of my life knowing this about myself, but that was literally all I knew about being Jewish. I never went to synagogue, didn’t become a bat mitzvah, we didn’t light candles or celebrate Jewish holidays or eat Jewish food. Since I don’t “look” Jewish, the only Jewish things about me are that I lived in New York and have a passion for lox and bagels.

I grew up in a secular home with lots of influences—Buddhist, Christian, Jewish, atheist, New Age. My dad is a fourth generation Chinese-American, born in Hawaii. If you ever see a balding, long-haired Chinese guy in Berkeley wearing two different color crocs, that’s my dad! My “Jewish” mom wasn’t raised Jewish. My grandfather was atheist and my Austrian grandmother converted to Christianity. I can only imagine this was her best way to cope during the war. In the background, my Jewish auntie and uncle would assure me that I am Jewish, even though I didn’t know what that meant. Then there’s my god-mom, a Southern black woman who meditated every morning and only ate macrobiotic, unless she was cooking her famous mac-n-cheese.

It was a smorgasbord that was totally liberating and utterly confusing! As a kid I felt trapped in between—I was everything and nothing; not Chinese, not white, not black, not Jewish or Buddhist or atheist, but I also felt I had a claim to all these things. Have you ever had to answer the question, “What are you?” Growing up, this was always the first question that people asked me. Innocent curiosity about my ethnicity was exhausting. There were times when I envied people who could check one box and who knew what they were and where they belonged.

But that wasn’t being handed to me, so everything about my identity has been claimed and self-determined. I moved to China, learned to speak Mandarin, studied up on Asian-American history and married a Chinese guy. We’re raising our kids bilingual; my 4-year-old daughter can sing more songs in Chinese than I can and our 7-year-old does Kung Fu.

I was feeling pretty smug about raising my kids to be so culturally fluent, until one day at the JCC. When I took the kids swimming, I had gotten in the habit of pointing out the Hebrew on the pillars and telling them it’s the Jewish language (not that I could read it). I checked a mental box every time I reminded them, “You’re Jewish too.” That day, my son Simon stopped me and asked, “How do I know that I’m Jewish?” And I said, “You’re Jewish because I’m Jewish.”

“How do you know you’re Jewish?”

“Well, because my mom’s Jewish.”

“No mom. How did the first person know they were Jewish?”

I was stumped. “That’s a good question.” That moment I realized that we don’t practice or express our identification as Jews in any outward way—it’s just been a statement of fact. Clearly this falls short, especially compared to the experiences, language and cultural ties that we’ve cultivated on the Chinese side. Simon in his 7-year-old wisdom knew: You have to do something to be part of it and for it to belong to you. Somehow he lasered in on this missing piece of our identity and it sent me spinning.

So I threw myself into reading Jewish books and met with three different rabbis to start my Jewish education. I even went to my first Passover seder with the kids. It turns out there’s lots of ways to be Jewish and my version is part of the Jewish experience. I’m 38 years old and this is just the beginning of my story about being Jewish… whatever that means.

Amourence Lee lives in a fixer-upper in San Mateo, CA, with her husband, two kids, two chickens and two cats.