Avoiding “That Look” on Purim 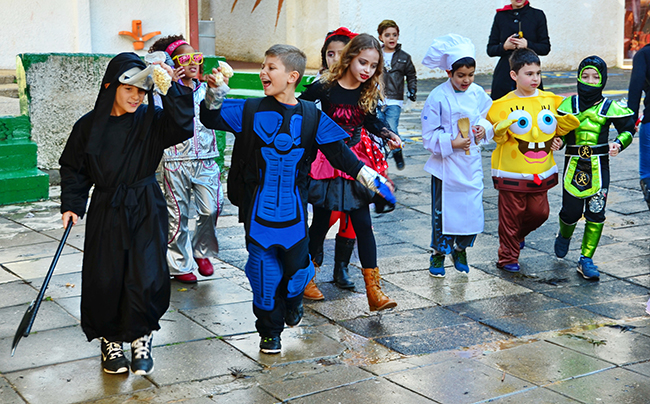 It’s Purim again and I’m afraid to leave the house. During Purim, my neighborhood is like being inside a disco ball at Studio 54 in 1976—only there are a lot more Jews and no sign of Bianca Jagger riding a white horse. When I was growing up, Purim was not one of the major holidays celebrated by my family. In the Yeshiva I attended we got to dress up, but there were only four biblical characters we could choose from: Esther, Mordechai, King Achashverosh or Haman. In first grade, I got so bored with dressing up as Esther that my mother hung two pieces of oak tag off my shoulders and I went as a castle. Nowadays, it’s different. Kids go as all sorts of things.

When Adrian and I decided to finally leave the house with our now 16-month-old daughter Helen, it was because we had a craving for quesadillas and grapefruit soda—not because we were delivering Shalach Manot (the bags of wine and food that are customary to gift to friends and neighbors on Purim).

Our car was inconveniently parked three blocks away in my mother’s driveway. I say inconveniently because anything goes on Purim in the Midwood section of Brooklyn. Again, it reminds me of Laura Luft’s famous quote, “Studio 54 made Halloween in Hollywood look like a PTA meeting.” The same can be said about Midwood on Purim.

Adrian thinks it’s hilarious. He grew up in Mexico in a small Catholic village and as we’re walking to the car, he says to me, “You know, in my town there’s a guy whose name is Purim.” I absolutely don’t believe him and tell him to stop mocking my people. He says, “I’m so serious!” Then he laughs and yells, “Feliz Purim!” to a boy running past us while wearing a donkey mask and roller skates.

Where were these costumes when I was a kid and what will our daughter want to dress up as when she gets older?

This year, when Purim wasn’t so visible because everyone was in synagogue for the Sabbath, my brother and his wife invited us to join their synagogue’s Purim celebration. I paused at my brother’s invitation because Adrian had to work, it was 20 degrees outside and when I took Helen last year, it was the weirdest Purim party I had ever been to. Also, as much as I think Purim is strange in my own neighborhood, it was ten times more zany in their neighborhood of Bay Ridge.

I remember that there was a big screen TV with videos of the Purim story for kids at last year’s Bay Ridge Purim celebration. The kids ran around singing songs and getting their faces painted. I also remember wrapping the fruit roll ups that they had around my fingers and pretended to have long nails like I did when I was 10 years old. No one found that as hilarious as I did and then I had a huge stomachache when I got home. Come to think of it, maybe I just made Purim weird in Bay Ridge.

This year, I opted out of Purim even though I’m trying hard to have my interfaith family celebrate every holiday. I knew I wouldn’t be able to resist the fruit roll ups, but also, the only costume I had for Helen was a sad and tired monkey costume that she already wore for Halloween. Yes, I’m that parent that never wants my child to wear the same costume twice.

Before we reach the car, a group of teenage boys dressed as giant cows and rabbits cross the street toward us. One of them looks defiant and drunk. It reminds me of another thing about Purim—everyone gets completely blitzed and runs around the neighborhood like it’s a ’70s disco party. This boy looks at me, then he looks at Adrian and finally looks at my Helen in the stroller. I can see judgment on his face and I feel that he’s thinking: Who are we? Why are we in Midwood? What are we doing on this block on this day? Don’t we know it’s Purim? He, more likely, could have been thinking, “Man I shouldn’t have done that last shot of tequila.” But the look, whatever it said, meant something. I felt uncomfortable as this giant boy child dressed as a floppy bunny looked at me and then at my family. I felt as if I had to explain that I grew up in this neighborhood, went to a Yeshiva, but found a different path and that I love my family, our differences, our two cultures and our two religions. I felt I wanted to say all of this to a 15-year-old boy in a rabbit costume. Why? Because of that look.

I have been getting that look long before I had an interfaith family. I got that look when I wore jeans on Sabbath and smoked cigarettes behind my parents’ house on the High Holy Days. I know that look well. The look has nothing to do with the person giving it and everything to do with the person getting it. I feared that look for a long time. I fear it now for my Helen Rose. She will get that look. She may get it in more ways that I received it. Maybe this is what I realize as the teenagers prance past us. With all our colorful cultural and religious differences as a family, how will I protect Helen from the look? My eyes meet the look and lock on it as if on a dare. I’m 14 years old again. The one boy who catches my eye turns away from me and I hear myself say as if for the first time, “Chag Sameach” (Joyous Festival) and then, “Feliz Purim.”