Marlena Thompson was part of an interfaith marriage that lasted almost 25 years before her husband died in 2003. She is a writer and singer/storyteller living in the Washington DC suburbs and visits Ireland whenever possible. Her mystery novel, A Rare & Deadly Issue (2004), has an interfaith heroine and can be ordered at www.pearlstreetpublishing.com.

505 July, 2001 Review of Mixed Matches: How to Create Successful Interracial, Interethnic, and Interfaith...

Israel–Still a Sticky Subject in Interfaith Families Like Mine

505 NEWTON, Mass., April 10 (JTA)–According to Jewish law, getting married is an exceedingly simple...

From the Wedding Kiss to Conjugal Bliss: A Review of Two Classics on Love and Marriage in the Jewish Tradition 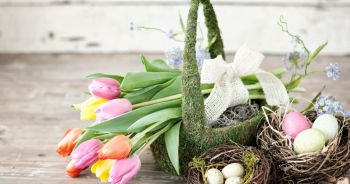 Happily Acknowledging Both Easter and Passover, in Our Own Special Way

Spring is definitely in the air. Unprompted by nothing other than a powerful urge to “renew and refresh,”...