And so it begins…

Chris and Dana here; the new couple for InterfaithFamily’s wedding blog. We’re so excited to share our experiences with you. 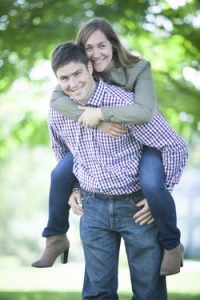 Let us begin by introducing ourselves. Dana is originally from central Massachusetts and Chris is from southern New Hampshire. We met in Boston after college while working as Americorps volunteers for a non-profit called Playworks and have been together for over five years. Dana was raised conservative Jewish and Chris was raised Catholic but currently neither of us attend service regularly. We still live in Boston in our newly purchased condo and are both still working in Education; Chris as a first grade teacher at a Boston Public School and Dana as a school administrator at a private school in Boston.

It has certainly taken us some time to get used to our different religions and traditions, but we have both been very open-minded throughout the learning process. We have each tried new things and gotten involved in one another’s faith. A key element of this is that we participate when we feel comfortable to do so and ‘sit it out’ when we don’t.

Now…about our wedding! We got engaged in November of 2012 and are getting married next June, 2014 at Dana’s parents’ home. The ceremony will take place in the front yard and the reception will be in backyard under a tent, in what Chris likes to call a “mullet wedding…business in the front, party in the back.” We will be married by a mutual friend and plan to incorporate aspects of both religions into the wedding ceremony. While we are not entirely sure what that will look like yet, we do know a few key details: there will be a chuppah, designed by Dana’s mother (more details about that later) and we will undoubtedly dance the hora, we will have a few Bible readings of Chris’ choosing and Chris is extremely excited to break a glass and give guests custom-made Boston Bruins kippot.

So how is our relationship different than a same-faith couple? Well, we don’t have to split holidays, which is pretty nice, and we get to celebrate both Christmas and Hannukah. In the beginning we often had to act as ambassadors for our respective faiths, explaining a lot and trying not to assume that the other knew things. We began the discussion of how to raise our children very early on and continue to give it a lot of thought. We both feel that religion is an important element of our lives both culturally and spiritually, and want to pass on the values we’ve received from our families and upbringing. However, we’ve also had to do a lot of self-reflection and think about how much of a role religion plays in each of our own lives at the moment.

It has certainly been a journey to get where we are now and we have learned a lot along the way. We are very excited to share our wedding experience with you readers and to see what our future brings!