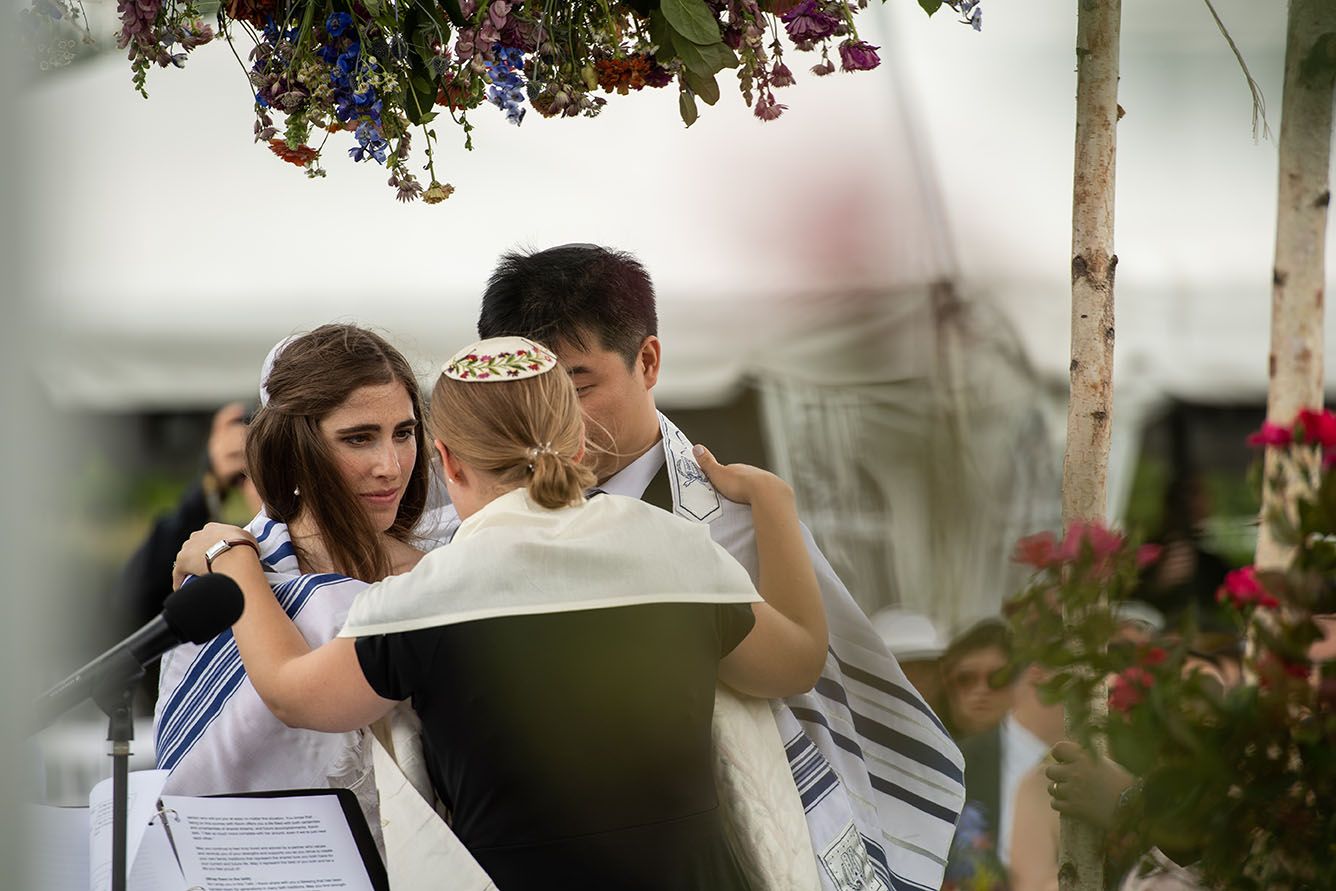 By Amy Smith
I’m draped on the couch skimming one of many wedding books on our coffee table. The first few pages provide an overview of Jewish marriage in which the author states that marriage between a Jew and someone of another faith can only be a “Jewish-style” wedding. “Jewish-style” but not quite Jewish. I frown, thinking of all the pseudo meals and experiences I’ve had with “-style” affixed to their name. I was raised in a Conservative Jewish community in which my family and I were active members. We went to weekly services; we celebrated most holidays; and, my siblings and I attended Hebrew school. I spent hours on the living room floor with a ’90s-era boom box and 10-track CD learning trope for my bat mitzvah. Being Jewish is not only a personal identity but also a connection to many generations of family–great-grandparents who traveled from Russia by way of Cuba to Brooklyn, and from Poland to the farmlands of central Jersey. In a partner, I sought love and open-mindedness. Kevin and I met through my sister, became friends over soup dumplings in Philadelphia’s Chinatown, and then partners, committing ourselves to the lifelong process of learning about each other and our mutually deep and complex heritages. Prior to our dating, Kevin had some understanding of Judaism from history classes and, perhaps most deeply, from Rugrats on Nickelodeon. Kevin and his family, while not religious, are part of a proud, culturally connected Chinese American community. Kevin is fluent in Mandarin, and while I grew up in Hebrew school, Kevin’s childhood was shaped by his time in Chinese school. Before I met Kevin, my exposure to Chinese culture primarily revolved around my love of spicy Szechuan food and attendance at Chinese New Year celebrations. Spending time with each other’s families naturally expanded our cultural knowledge. But once we became engaged, we realized how little we knew about planning a Jewish Chinese wedding. We wanted to saturate the events with Chinese and Jewish traditions; but we soon found that there are very few websites, articles or books that specifically discuss this cultural intersection. On top of that, there are no Rugrats episodes covering Jewish Chinese weddings. Without a model to emulate, or a guide to follow, we felt overwhelmed. Kevin and I knew we still had a lot to learn so we continued to do research on both of our traditions, including reading a Jewish wedding book. But, we also made a conscious decision to prioritize our own feelings and ideas throughout the process. Instead of adhering to prescribed steps, Kevin and I felt empowered to make every decision together. We considered rules and traditions but ultimately made every decision in a way that worked for both of us. Wedding planning became our joint project, and somewhere along the way, we became our own authority on how to plan a Jewish Chinese wedding. 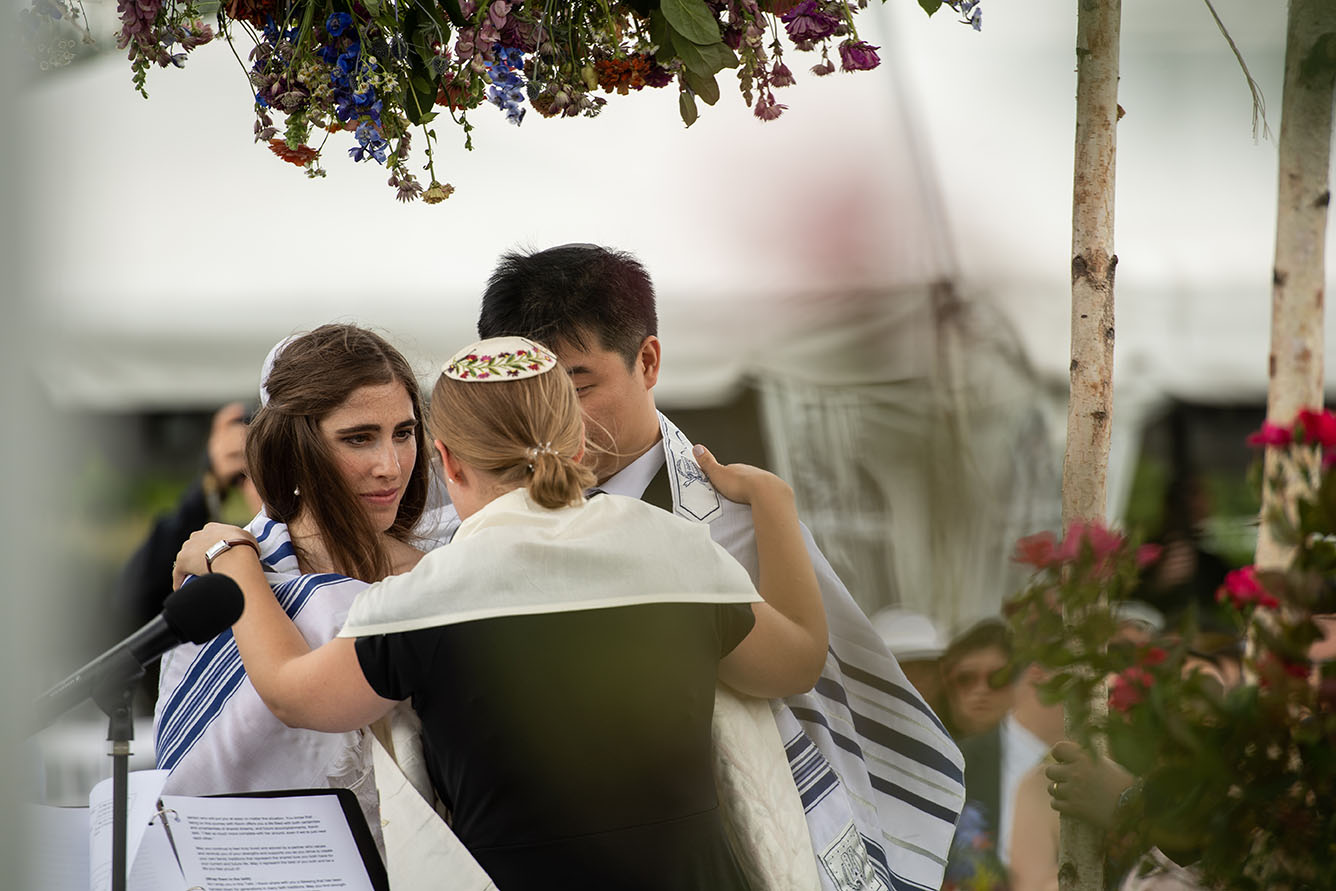 Rabbi Elyssa Cherney officiating the ceremony.Our venue, a picturesque golf course bordered by woods, created a scenic backdrop for our chuppah. We knew our first step would be finding an inclusive and supportive rabbi, someone who accepts our multicultural background and could guide us in Jewish learning. After myriad services and meetings to find the right fit, we met Rabbi Elyssa Cherney (an 18Doors Rukin Rabbinic Fellow) through a friend. During a meeting over coffee, our rabbi thoroughly explained every aspect of the Jewish wedding ceremony – for both Kevin and my edification–and asked about modifications to explicitly include Chinese traditions. We were grateful for her open-mindedness and enthusiasm. Designing invitations also presented an opportunity to highlight our multicultural union. Opting to create invitations online, we had the latitude to incorporate Chinese, Hebrew and the color red, which symbolizes good luck and good fortune in China. My Hebrew name, Chana, and Kevin’s Chinese name, Ke, accompany our English names in Hebrew and Mandarin respectively. While important details crowd the front of the card, I loved our inscription on the back where the timeless Hebrew promise “Ani l’dodi v’dodi li” is stacked above the Chinese characters for “double happiness,” a ubiquitous marriage maxim in China. Of course, both phrases were inked in red. Kevin and I gained new names to reflect our crisscrossing journey. Kevin’s Hebrew name is a phonetic spelling of Ke. My Chinese name is phonetic and means “finally I found love.” We shared these names for the first time on our wedding program. 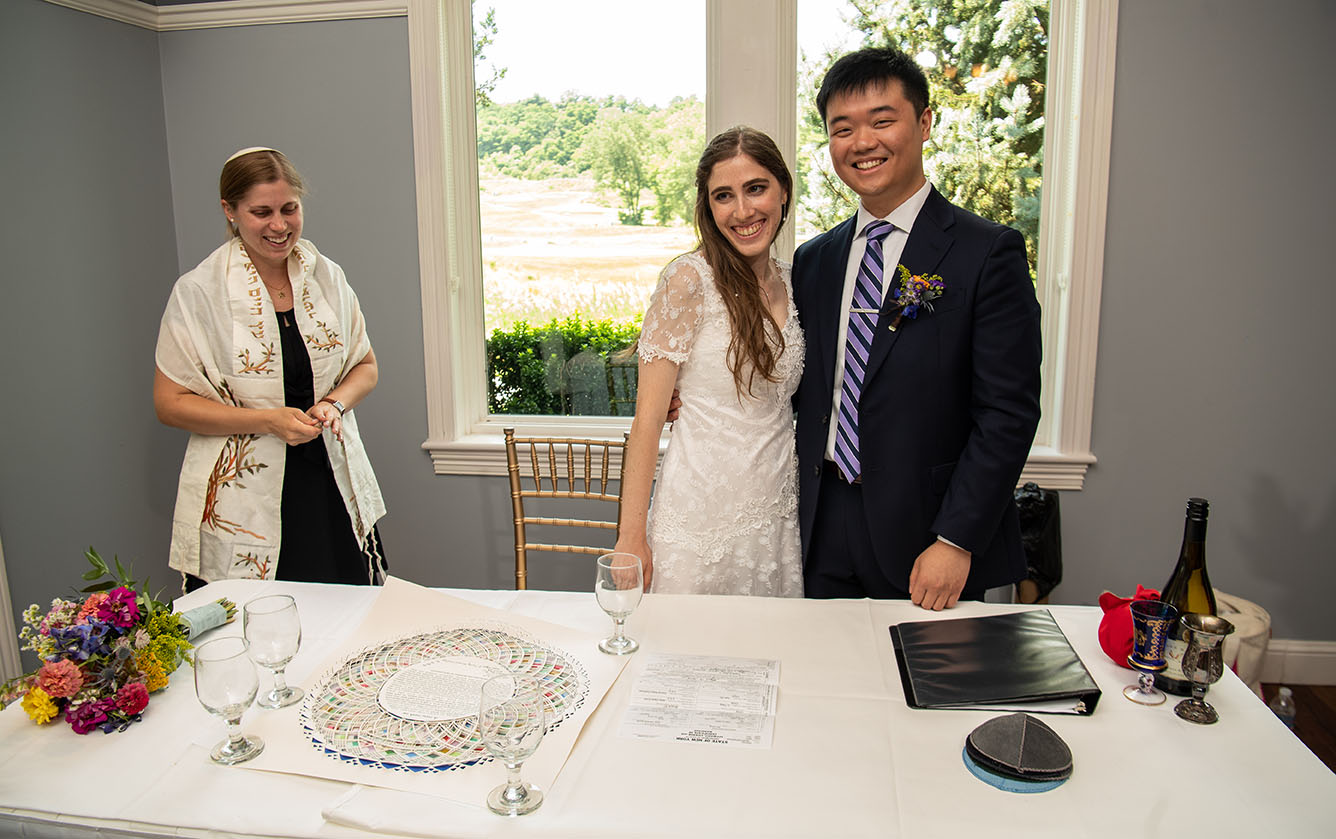 When it came to the wedding itself, to honor both American and Chinese traditions, I would alternate white and red dresses during the festivities. I bonded with my mother and future mother-in-law trying on vintage white gowns and bold red qipaos. With our careful planning complete, our June wedding proceeded smoothly, blending Chinese and Jewish customs. I wore my bright qipao to our Chinese Tea Ceremony, a ritual in which bride and groom serve their elders tea and ask for their blessings. After gathering our families, Kevin and I took turns pouring and serving tea. Each elder thanked us in Mandarin, offered us a red envelope and gave a personal and heartfelt response. It was meaningful to honor our closest family members, people whose support made everything (our wedding, our lives) possible. As a plus, my relatives loved learning a few words of Mandarin for the ceremony. Following the Tea Ceremony, we headed into the Door Games, a second, rowdier Chinese tradition. According to custom, the bride’s friends create a series of humorous obstacles for the groom and his friends to overcome until he “wins” the right to see his beloved. One highlight was a choreographed dance to the Spice Girls song “Wannabe.” In the end, Kevin reached his betrothed, so it was a success. The Jewish ceremony took place the following day. While Kevin and his family are not religious, one of the ways that they connect to Judaism is through storytelling. Not only was it important for the rabbi to translate each Jewish ritual for our multicultural audience, Kevin and I also wanted to understand each step of the ceremony beforehand. 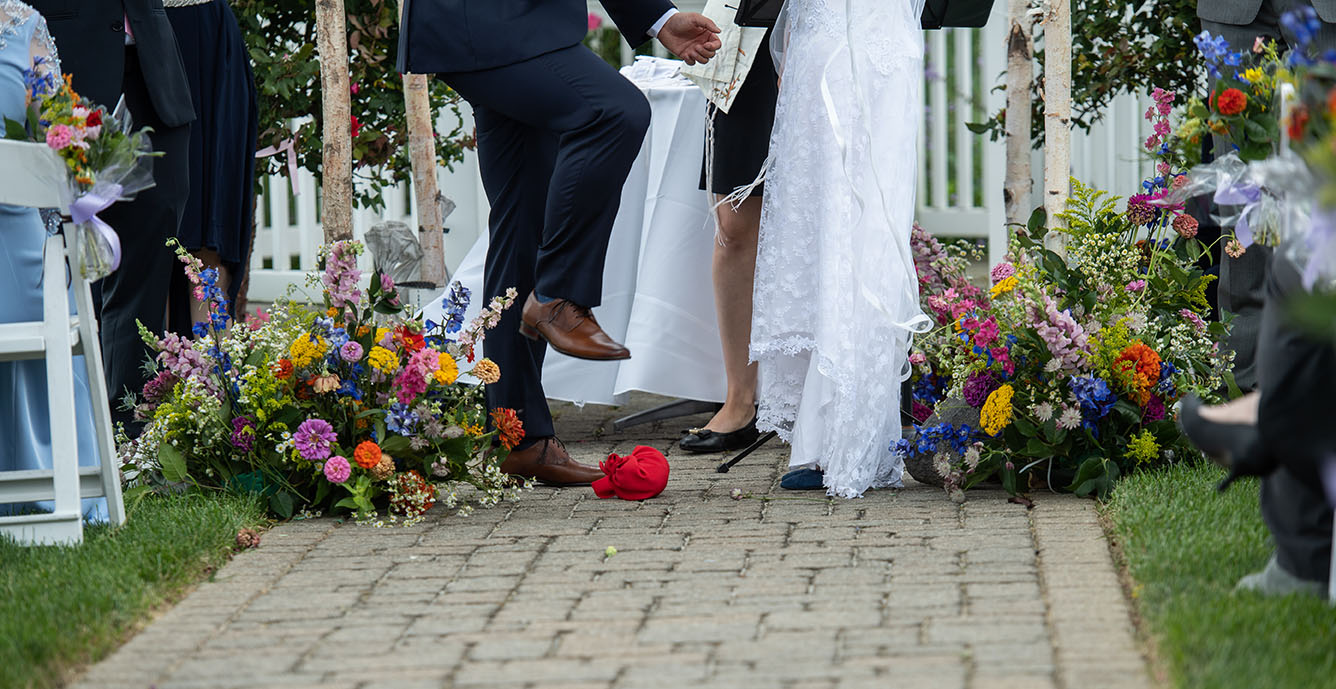 We practiced weaving circles around each other in an egalitarian fashion of three loops around the groom, three around the bride, and one together. We read translations and interpretations of the Seven Blessings supplied by our rabbi. Kevin was excited about shattering the glass, a lightbulb wrapped in red, of course, and we pondered the various reasons for this iconic action. We agreed to include all the Jewish customs that the rabbi suggested, and Kevin wore a kippah for the ceremony as he customarily does when he is in a Jewish place of worship. We did opt for two changes to the Jewish ceremony that reflect our personalities as much as our heritages. First, we wrote and read our own vows. Our words of love and commitment had been percolating for years and we wanted to share these promises with each other in front of our family and friends. Second, we opted for a tri-lingual reading of the Seven Blessings. After the rabbi chanted them in Hebrew, Kevin’s and my parents read each blessing in Mandarin and English respectively. Speaking the three languages of our future household out loud was a powerful reminder of the strength of our union. The reception, joyous and bright with summer light patterning the dance floor, would not be complete without a Hora and multicultural playlist. The DJ played C-Pop and trendy Israeli songs. The Hora brought everyone to the dance floor. Kevin’s father particularly enjoyed being lifted on a chair, his arms reaching toward the sky the whole time. Everyone went home with chocolates in gold-trimmed red boxes, a Chinese tradition that signifies the sweetness of the occasion. I am full of wonder thinking back to that June weekend. A friend told me that our wedding “was so us,” one of the nicest compliments we could receive. Without a guidebook, we found our own way, and doing so, forged a deeper connection to our Jewish and Chinese heritages.

Weddings for the Interfaith Couple