A Quiet Home, a Kosher Home 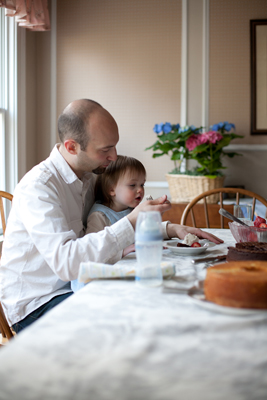 Before my husband and I could get married, I had to mourn mashed potatoes and hamburger gravy.

I needed to sit on his couch, weeping and trying to enunciate through my snot, while he held me. “But. It. Is. My. Favorite thing. That my mom makes. And my grandma. Taught her. How to make it. For my dad. And I always. Thought. I. Would. Make it. For. My. Own kids.”

Our courtship was quick. We got engaged after six months of dating and married seven months after that. It sometimes feels like we spent that entire pre-marital year talking about religious practice and how far each of us was willing to go to help the other be spiritually fulfilled without violating our own spiritual and identity needs.

An interfaith family wasn’t what either of us had imagined for ourselves. But we couldn’t deny that love, similar communication styles, shared values and goals, mutual geekiness, and the ability to make one another laugh made us too compatible to pass up the opportunity for the hope of someone who also shared the same faith tradition.

Both of Jacob’s parents were born and raised somewhat secularly Jewish, but his father began to keep kosher as a young adult as part of what would turn out to be a lifelong trajectory toward modern Orthodoxy. The legend goes that he asked Jacob’s mother–an ardent vegetarian–to marry him by asking if she could ever see herself eating meat again. We know how she must have answered as Jacob and his siblings grew up in a house that kept milk meals and meat meals separate; only ate hechshered (kosher) meat; and completely avoided pork, seafood that lack fins and scales, and any other meat forbidden in scripture.

They do not need all of their food to be certified by a rabbi like many families that keep kosher do, but rather read labels vigilantly, making sure that hot dog buns did not contain whey (which would make them dairy, not suitable for using with meat hotdogs) and that desserts are not made with gelatin or marshmallows (animal by-products can’t be assumed to be slaughtered appropriately). They eat in any type of restaurant, not fussing if their fish is prepared on the same grill as shellfish, but asking if the soup is made with chicken stock before ordering it and sending back dishes containing pancetta that was not disclosed on the menu.

It turns out that I can do all of those things too but I would not have been comfortable keeping a separate set of dishes or having to reject the hospitality of others if they did not keep the same level of kosher that our family does. I believe that breaking bread together is sacred; I would not want to offend anyone by declaring their food offerings as not “pure” enough (beyond the basic request that it be vegetarian, which makes it an acceptable “milk” meal by default).

There has been some haggling along the way. I used to leave my wrapped leftovers from the restaurant in his fridge to take to work for lunch the next day. This seemed OK to both of us since the trayf (not kosher) food wasn’t being eaten in the house but in the end, he realized that it bothered him. Passover was a bit of a sticking point and continues to evolve in our life. At first, it seemed needlessly legalistic but I have begun to realize that traditional food is as much a celebration of “being Jewish” as the seders themselves. However, we still do not have dedicated Passover dishes as Jacob would like.

The other negotiation was similar to Jacob’s parents’ negotiations. I was also a vegetarian when Jacob and I met, for environmental and humane reasons. But much of Jacob’s Jewish identity involves feeling set apart from the majority: being different because he is Jewish. He wanted our shared life to involve negotiating the separation of milk from meat, because the rest of life is a negotiation between being “chosen” and assimilation. Simple vegetarianism would not force that negotiation.

I agreed to keep a kosher home because constantly thinking about the boundaries God has given us is a valuable daily reminder of a healthy relationship with God. Additionally, we feel that being deliberate about incorporating traditional rules will make it easier for our children to form their own Jewish identities in a house that practices two faiths. Going back to eating meat sometimes feels like it is a step backward for reducing my negative impact on the world but it is a dance I am willing to do for our life together, which is several steps forward.

Finally, I had to abandon my own dream of preparing the ultimate comfort food of my life for my own children. My German heritage of preparing meat in milk gravy was also going to have to take a backseat to this shared life of ours.

In the end, the Jewish spiritual practice of being deliberate about what I put in my body and what I feed to my daughters has equivalent or even greater impact on my life and on the world as my choices to be vegetarian or to be German and Presbyterian.

Rebecca Cynamon-Murphy is the Christian partner in an interfaith marriage. Both she and her Jewish husband practice their faiths individually and share what they can of each other's traditions. She considers this lifelong process of cultural and personal reconciliation fulfillment of God's consistent commandment to mend the world. She has degrees in English and Public Policy and is currently spending the majority of her days reading books to her toddler.