A Not-So-Cookie Cutter Hanukkah: Or, When The World Makes It Difficult To Celebrate Hanukkah

We were late. ‘Twas the night before Christmas, and all through the aisles of Target, my husband and I were doing our version of stuffing stockings. We were running so fast we were practically sliding to try to fill his stocking and my festive Chinese takeout box before we left for his parents’ house.

We each picked up cookie cutters for the other person, but unfortunately Target is not known for its Jewish cookie cutters. Although I found a package of winter cookie cutters for him, they still included a tree. I love Target and would buy out the entire store, but it’s not our go-to for Jewish holiday foods or items. We were lucky to find a menorah at one store the year before, though. (What’s funny is that my husband is the one who usually remembers to light our Hanukkah candles.)

We did our best, but in the end he still couldn’t find cookie cutters for Hanukkah at Target. I think this exemplifies how I feel at Christmas: Takeout boxes and menorahs aside, it ain’t easy bein’ Jewish. 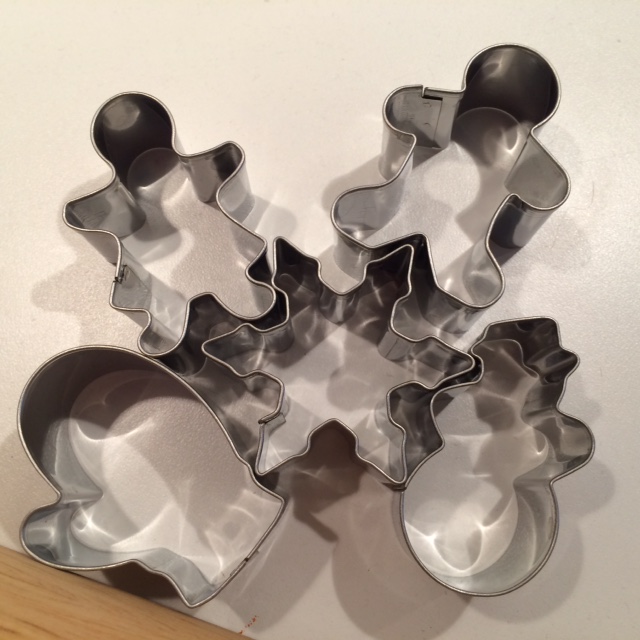 Growing up in a college town in Iowa, mine was one of the few Jewish families around. I still remember wanting to connect with other kids celebrating Christmas while we were ordering Chinese food and going to the movies. So although I feel guilty about it, there’s a part of me that’s happy that I finally get to celebrate Christmas. We open presents and bake cookies. It all works like clockwork until I go to church with my in-laws on Christmas Eve and hear the word “Jesus” one too many times. And, suddenly, I feel more alone than ever.

The winter holidays are easier and harder since I met my husband. Now I have the right person to celebrate them with, but it has come with a conflicted sense of identity. Instead of the clearly defined separation from Christmas that I grew up with, I can’t remain on the outside of the holiday and culture that surrounds us in the States. I still want to remain outside, but I’m also inside the phenomenon.

The phrase “December dilemma” implies there’s a conflict. But while it’s easy to say it’s external, between spending time decorating the tree or lighting Hanukkah candles, isn’t it more internal? It’s the cognitive dissonance between being with people you love and hearing about the one they adore, and needing to escape into the lobby of the church. It’s making Christmas cookies and needing to avoid most of the cookie cutters because they’re outlining the differences you’re not discussing.

Now, however, I’m trying a different strategy. For my husband, the holiday season was incomplete until we had a Christmas tree in our home. I still have trouble unfolding this umbrella tree (and not just because it’s larger than I am), but now I try to see it as a traditional symbol, not a religious one. Indeed, the tree is a fake one that my in-laws took with them when they moved from house to house; it’s literally part of their family’s history.

Helping my partner lug the tree up our basement stairs is part of helping him observe his holiday. (Our cats try to help set up the tree, too, but their version involves eating the tinsel instead of putting it up.) It’s all part of our life together. I used to walk through the store aisles, see menorah and dreidel ornaments and feel confused. Now I understand that these are pieces of new traditions we are creating. In a way, when we add these to a Christmas tree, we are resting symbols of a smaller Jewish holiday on the branches of a much bigger Christian one. We all make choices. I never anticipated having a Christmas tree in my home, but I always knew there would be a menorah shining out the window.

Christianity started when people began following a Jewish man. He searched and others found him to be so wise they thought he was the Messiah. Although Jews think he was a good man, we disagree with the Christian conclusion. This could be considered, simply, a major difference of opinion. The weird part is that it’s between Christians and Jews, rather than between two Jews (who would, of course, have three opinions).

We hold different beliefs and lug different traditions out of our storage closets. And Target may or may not have our cookie cutters. But in the end, I think each of us would like a secure place to keep whatever cookie cutters we’ve bought, and family to help us fill them with dough. My mother-in-law has a fabulous recipe, and although she keeps it close, I think it involves elements found in many kitchens: love, warmth and laughter.  Maybe a little bit of teasing and schmaltz, too.

2. On lightly floured surface, roll half of dough to 1/8-inch thickness. Keep other half of dough chilled until ready to use. Cut into desired shapes with cookie cutters. Bake on greased cookie sheet at 375 degrees about 6 to 8 minutes. Cool slightly, then remove from pan. Makes two-dozen cookies.