A Jewish Grandmother and Her Catholic Grandchildren: A Love Story 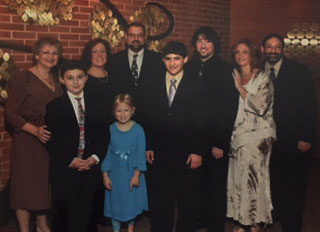 For the past eight-and-a-half years, I’ve been the rabbi of Temple Menorah Keneseth Chai (TMKC). It’s a small community with a close-knit group of congregants.  During our Friday night Shabbat service each week, we have Simcha Time: when people are invited to come up to the bimah and share about birthdays, anniversaries and other good news.

Dottie Bricker, a TMKC congregant, is an amazing woman with a very strong Jewish background and connection to Judaism and the Jewish people. Dottie grew up in an Orthodox Jewish home. As a young girl, Dottie spoke only Yiddish at home – she didn’t even learn English until she went to kindergarten. Dottie comes to services regularly and often comes to the bima to kvell about her four grandchildren.

My Journey that Started Twenty-Two Years Ago (by Dottie Bricker)

It was a few days before Hanukkah when my son Howard called and asked if he could bring someone to our party. I said, “Of course.” And he said, “Mom, she’s not Jewish.” I asked, “Is she nice?” And he answered, “Very.”

After Rachel was born, my son called and said that Gail wanted to raise the kids in her Catholic faith. Then he asked me if I would be OK with this. My answer was, “Are you nuts?! I love them the same as the other grandkids. They are the air I breathe. They are my naches.”

When Charlie and Rachel started school, I became very familiar with their school, Our Lady of Good Counsel. When they received awards, I was there at Mass to see them honored. My Charlie’s third grade teacher, Mrs. Yerkes, asked if his Bubba would come to read the story of Hanukkah to his class. I said I would love to. I read the story and taught them to play dreidel. I bought them jelly doughnuts to eat and they had a great time. A few months later, Mrs. Yerkes asked if I would read the story of Passover, and I was happy to go back. I brought matzah for the students to try. They said they liked it, but they liked the jelly doughnuts better.

When Charlie was in fifth grade, he told his teacher about his dad’s small Torah. The teacher asked if he could bring it to school. My Charlie called me and asked if I’d come to school and teach about the Torah. Once again, I said, “Of course.” It was a wonderful experience for me.

My grandkids are now in high school and I have just been retired from my job at Our Lady of Good Counsel. There’s a new “Bubbie” in Mrs. Yerkes’ class.

My grandkids know that if they need Bubba I will be there for them. I have chaperoned school trips, gone to Phillies games with Rachel and even taken Charlie to the Mother-and-Son Dance when Gail was called into work at the last minute.

I like to say that my family is a “blended family.” We learn from each other. It’s special.

They are truly the air I breathe.

Some Jewish grandparents whose grandchildren are being brought up in a different religious tradition may understandably have a much harder time accepting that reality than Dottie. In my blog post about honoring grandmothers of Jewish kids who aren’t themselves Jewish, I noted that, “Unlike their own sons and daughters, who fell in love with someone Jewish and made the choice to have a Jewish home and raise their children as Jews (whether or not they themselves became Jewish), these grandparents who aren’t Jewish never had a choice—they’re bound by their children’s decisions.” Of course, the same is true for Jewish grandparents whose grandchildren are being raised in a different religious tradition. It can be difficult to accept your own child’s decision to not raise your grandchild as a Jew.

Ultimately, it’s a parent’s decision how to raise their child. With mutual respect and lots of communication between grandparents and adult children, grandparents can hopefully find ways to share their Jewish traditions with their grandchildren without the parents feeling that the grandparent is “pushing” Judaism on their child.  This may be hard, and the grandparent may legitimately feel a sense of loss that their grandchild isn’t Jewish (see my blog post on acknowledging the loss of a parent who commits to raise children in a religious tradition other than the one they grew up with-this can be all the more difficult for grandparents who didn’t have the choice to make.) But hopefully, like Dottie, the grandparent will love their grandchildren unconditionally, and describe them as nothing less than “the air I breathe.”

Everyone Moved In and We Saved Each Other