Mother-Daughter Team Rises Up to Bake a Bunch of Hamantashen: Plus Some Delicious Recipes

This article is reprinted with permission of JTA.

NEW YORK, Jan. 23 (JTA) — Because my mother hated baking, she cluttered our kitchen cabinets with store-bought cookies. We never had fewer than two-dozen boxes of them on hand: chocolate chips, gingersnaps and Oreos. Although Mallomars were my favorite, they were a sorry substitute for hamantashen when Purim came around.

When I grew up during the 1950s and 1960s, hamantashen were consumed only at Purim, and we waited all year for them. Back then, you had to make them yourself, which my mother was not about to do, or buy them at bakeries in Jewish neighborhoods. 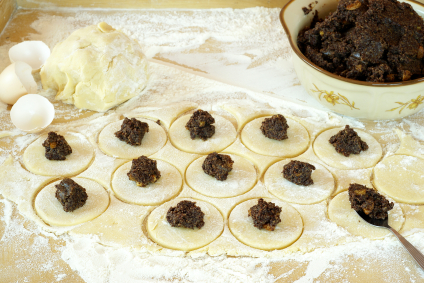 Making hamantaschen: a great activity to do as a family.

Because the suburb where we lived was not very Jewish, I’d get a taste of hamantashen only if my father carried them home from his office in Manhattan, or if friends arrived with square boxes of them tied tightly with string. Inside I’d find triangular confections filled with poppy seeds or prunes. Maybe I was unsophisticated, but I loved their inky black fillings, as mysterious as the spiral turrets of Eastern Europe from where this pastry came.

It was this void from Purims past, a feeling that the cardboard cookies my mother palmed off on us had left me incomplete, that spurred me in the 1980s to suggest to my daughter that we bake hamantashen. At 14, Allissa was game, but suggested we bypass the fillings of my youth in favor of trendier alternatives: marmalade, blueberry and red raspberry preserves. By then hamantashen centers, like Xerox copies, came in a spectrum of colors.

Within minutes, fine flour fogged our kitchen, and we were elbow deep in a mixture of wet and dry ingredients. When I went to roll the dough, it didn’t cooperate. It was sticky and clung in clumps to the counter and rolling pin. My fantasy of overcoming the disappointing Purims of my childhood by baking with my daughter had failed.

“Let’s just dump this mess in the trash,” I said, shoving the rolling pin toward the mixing bowl.

“Can I try?” Allissa asked, picking up the rolling pin.

Because Allissa was adept at taming clay for sculpting and ceramics, she also had a knack with dough. Moving the rolling pin back and forth, she coaxed it into a thin circle.

“Why don’t I roll the hamantashen and you fill them,” she suggested with a patch of flour on her cheek.

I was thrilled since I didn’t want to waste the four jars of preserves I’d opened for this bake off.

We worked this way for half an hour until we became proficient enough to change roles. I took the rolling pin and, after Allissa coached me, I learned how to finagle dough and cut perfect circles. She spooned jam on top and pinched circles into triangles. We spent several peaceful hours and made eight dozen hamantashen that afternoon, which we gave to friends. The incident remains a lovely memory, but sadly we’ve never had the opportunity to bake hamantashen together again.

Since the jelly-filled days of the 1980s, hamantashen have continued evolving, and a new generation of teenagers is on the scene. Raised on chocolate centers, they came of age after hamantashen went mainstream. They are unfazed by pre-packaged triangular cookies sold year round on supermarket shelves next to the Snackwells and the Chips Ahoy. To kids living in cyberspace and carrying cell phones, poppy seeds and prunes are as relevant as the last millennium.

Although I tell people I am not opposed to cross-cultural influences (without them we wouldn’t have salmon gefilte fish or sweet potato latkes), I also think it’s a shame to forget the heritage of hamantashen in pursuit of cutting-edge innovations.

The word hamantashen derives from the German and Yiddish “mohn,” meaning poppy seeds and “taschen,” pockets. It’s been speculated that the pastry’s first five letters “Haman,” represent the wicked vizier who planned to annihilate the Jews of Persia.

The Purim story is set in ancient Persia in the court of King Ahasuerus, who held Haman in high esteem. Mordechai, a respected member of the Jewish community, heard that the king was holding a contest to select a wife. Mordechai convinced his niece Esther to enter, and unwittingly Ahasuerus snapped up the exotic Jewish beauty. Marrying the king, Esther not only became Queen, but waited for the right moment to reveal her religion and expose Haman’s murderous plans against her people. The king turned against his vizier. Ironically, Ahasuerus arranged for Haman to be hanged on the pole he had erected to kill the Jews. Grateful to be saved from disaster, Mordechai and Esther organized a celebration that evolved into modern-day Purim.

Although hamantashen took their shape from the three-sided hats Haman purportedly wore, there is no proof that his hats were triangular. Centuries after his demise, Jews on another continent, also inspired by a German confection, began baking miniature three-cornered cakes filled with poppy seeds. Hamantashen spread like wild fire throughout Central and Eastern Europe, the hub of the Ashkenazi world.

Originally made with yeast, the dough, similar to modern-day Danish, was as soft as a cushion. In the Old Country, women not only filled hamantashen with poppy seeds but also lekvar, a lusciously thick spread made of fruit, usually prunes or apricots, simmered in sugar. In 20th century America though, cookie-style dough beat out yeast hamantashen, the latter being more complex and time consuming to prepare.

Continually evolving, hamantashen have changed inside and out; another incarnation are deep chocolate dough wrapped around rich almond paste. Like bagels, hamantashen have infiltrated the American culinary scene and are available year round in bakeries, delis and supermarkets. In many cases, their ubiquitous presence has resulted in a downturn in quality. Although it’s gratifying that this little cookie has spread like a mighty empire, mass production has robbed its Purim identity. Some people are unaware that the triangular treats they consume with gusto are more Jewish than Levy’s rye bread. They are satisfied with crust chunkier than Play-Doh.

Worse yet, there are fewer and fewer people who remember when hamantashen, like strudel, were as fine as Viennese pastry and spun like magic from Hungarian bakers’ hands.

1. Install metal blade in a food processor. Into its bowl, place wet ingredients and process until well blended. Mixture resembles orange cottage cheese.
2. Sift dry ingredients and add to wet ones. Blend well until mixture clumps and forms a ball.
3. Wrap dough in foil and refrigerate for 2-12 hours.

Recipes for fillings and directions for assembling hamantashen are below. 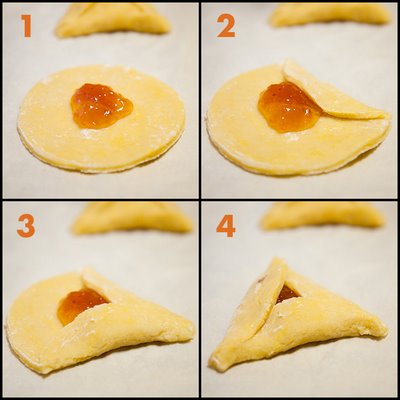 How to form the hamantaschen, once the filling is placed on the dough.

1. Place ingredients in a 6- to 8-cup pot and cover. On high flame, bring to a boil and let it bubble for 10 minutes, until fruit swells and liquid turns syrupy. Stir almost continuously to avoid burning. Cool to room temperature.
2. Place in a food processor and blend with metal blade for 1-2 minutes, or until mixture becomes like paste.
3. Fill hamataschen immediately or cover and refrigerate lekvar. Return to room temperature before using.

Place 2 Tbsp. honey and the remaining ingredients in a small saucepan. Mix with a spoon. On medium flame, simmer until mixture thickens, about 5 minutes. Stir in remaining honey. Cool to room temperature.

Mix cocoa, sugar and coffee in a medium sized bowl until well blended. If mixture is too dry, add amaretto one tablespoon at a time, until it becomes looser than fudge but thicker than frosting.

Fill hamantashen with seedless preserves or jams in a variety of colors and flavors. Avoid using jelly, which turns watery.

Directions for Assembling and Filling Hamantaschen

1. Place racks in center of oven. Preheat to 350F. Coat 2 cookie sheets with no-stick spray. Dust counter and rolling pin with flour.
2. With a serrated knife, cut dough ball into quarters. Wrap three of them in foil and return to refrigerator.
3. With your hands, form first dough quarter into a ball and flatten with palms. Using rolling pin, roll dough to 8 inches in diameter and about 1/8 inch thick. An amoeba-shaped circle will form.
4. Using a 2-1/2 inch cookie cutter, cut several circles and move to the side. Pick up remaining dough, form another ball, and roll into a smaller circle. Repeat one or two more times, until only scraps remain.
5. Place 1/2 tsp. of filling in the center of each circle. With fingertips, pick up rim of dough and pinch in three places to form a triangular cookie with a filled center.
6. Place on cookie sheets and bake for 5 minutes. Open oven and move upper tray to lower rack and vice versa. Bake 5 more minutes or until edges are golden brown. Remove from oven and cool for 2 minutes. With spatula, move cookies to platters to cool completely.
7. Follow the same procedure for remaining dough in refrigerator. Store baked hamantashen in airtight containers or freeze and defrost later.

1. Cream margarine and sugar for 1-2 minutes, until fluffy and light.
2. Slowly add flour, incorporating well. Add egg and beat.
3. Add cocoa, baking powder, and vanilla. Beat well. Dough will be thick. With a spatula, roll dough into a ball and wrap in aluminum foil. Refrigerate for 2-12 hours.
4. See directions for filling and assembling above. Fill with almond paste (see recipe below).
Yield: 40-48 cookies

1. Place almonds in food processor. With metal blade, beat for 4-6 minutes, scraping bowl several times, until almonds look and feel like wet sand.
2. Add sugar and beat about one minute, until well incorporated.
3. Add egg and beat again. Mixture will ball up, become pasty and appear buttery.
4. Cover almond paste with plastic wrap so it doesn’t dry out. Fill hamantashen immediately or refrigerate and return to room temperature before using.

Linda Morel is a freelance writer based in New York.