I knew that Twilight (2008) and its recently released sequel, New Moon, were mega-hits of the first order when I recently visited my local Blockbuster store. It had been turned into a veritable Twilight emporium. The store was selling Twilight fleece blankets with the faces of the film’s stars imprinted on the blanket, Twilight dolls and trading cards, even Twilight mini-chocolate bars with the faces of the film’s stars on the package. 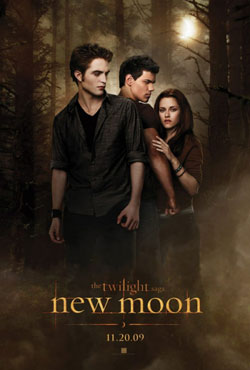 No question, Twilight is up there as a pop culture phenom with Star Wars, Titanic, and Harry Potter. A third film in the Twilight series, Eclipse, has already been filmed and will be released next summer. (Twilight grossed about $400 worldwide in movie ticket sales. New Moon has already grossed almost $500 million in ticket sales and it is still in theaters).

The Twilight films are based on the novels of Stephenie Meyer, a devout Mormon housewife and mother who wrote the first Twilight novel (her first novel, period) in her spare time. Her first book was a runaway best-seller. The following three novels in the series sold just as well.

In short, the novels center on the relationship of a human teenager, Bella Swan (played by Kristen Stewart), and a handsome young vampire, Edward Cullen (played by Robert Pattinson). Edward Cullen comes from a family of vampires.

Catherine Hardwicke, 54, directed the first Twilight film. She was trained as an architect, but worked in the 1990s as a feature film production designer. In 2003, she directed her first film, the critically acclaimed Thirteen. She wrote the script, in six days, with Nikki Reed, then 14.

Thirteen co-starred Reed and Evan Rachel Wood as two prematurely mature teenagers. It was very frank its depiction of drug use and underage sexual activity. The script was somewhat based on Reed’s own experiences, but she says she was never as wild as the girls in the film.

Reed is the daughter of Seth Reed, a Jewish set designer. Her mother, Cheryl Houston, who is not Jewish, is of Italian and Cherokee descent. Reed’s parents divorced when she was young. Later, Seth Reed began a long-term romantic relationship with Hardwicke (who isn’t Jewish). My sense is that Seth Reed and Hardwicke were living together when the script for Thirteen was penned. They broke up around the time Thirteen was released.

Reed has mentioned in interviews that she was “raised around Judaism” but had no formal religious training. Her brother, she said, had a bar mitzvah. I gather she identifies as Jewish. Reed and Wood provide a running commentary on some Thirteen scenes on the film’s DVD. In one scene–one of them, in character, is wearing a big cross–and they both say it was a little odd since they are Jewish in real life.

Reed has a major supporting role in the Twilight films as vampire Rosalie Hale, the beautiful adopted daughter of Edward Cullen’s parents. Reed is reprising this role in New Moon and the upcoming Eclipse. (It isn’t clear if Hardwicke directly cast Reed in Twilight–or when Hardwicke was named director–it gave Reed an inside track on the Rosalie Hale role because the casting people knew Reed worked well with Hardwicke.)

The director of New Moon is Chris Weitz, 40, the brother of filmmaker Paul Weitz, with whom he has often collaborated. I’ve previously written about their interfaith family background.

Melissa Rosenberg, 47, is the screenwriter of all the films in the Twilight series. Rosenberg was the subject of a very interesting and well-written recent interview/profile in the Jewish Journal of Los Angeles.

She is the daughter of a Jewish father and a mother of Irish Catholic background. Rosenberg, who was raised without religion, told the Journal that she came to identify more as Jewish when she encountered a more vibrant Jewish “scene” at college. Subsequently, she met and married her husband, TV director Lev Spiro, who is Jewish. Before their marriage, they both took classes in Jewish practice and culture from a Los Angeles rabbi and were married in a synagogue.

I stumbled on this charming web log Rosenberg wrote for Entertainment Weekly. She gives a blow-by-blow of the lead-up to the premiere of New Moon, and writes about the premiere itself. There are nice photos of Rosenberg, a very striking woman. She calls her husband “dashing.”

Finally, there’s actress Elizabeth Reaser, 34, who plays Esme Cullen, the adoptive mother of the Cullen siblings in the Twilight film series. Reaser, who isn’t Jewish, was the stepdaughter of William “Bill” Davidson, who died earlier this year, age 86. Residents of the Detroit area and sports fans will immediately recognize Davidson’s name. Davidson, who was Jewish, grew up in the Detroit area and turned his family’s once bankrupt glass company, Guardian Glass, into one of the largest glass companies in the world. Davidson was a billionaire who also owned at the NBA Detroit Pistons and the Detroit Shock team of the WNBA. As detailed in the linked bio, he was a “really really big” contributor to secular, Israeli, and Jewish charities.

Reaser grew up in Blooomfield Hills, Mich., an affluent and heavily Jewish suburb of Detroit. In 1999, her mother, Karen, who isn’t Jewish, married Davidson. Karen Davidson became the owner of the Pistons upon her husband’s death.

NBC has been struggling in the ratings, but one bright spot is Community, a new sit-com about a group of students at a community college. Critics liked it and the ratings have been strong. The network just ordered a full season of shows. (Airs Thursdays at 8 PM).

After reading the reviews, I tuned in for a few episodes of Community and I was pleasantly surprised. It is a well-written show that is genuinely funny—a lot funnier than most feature comedy films about college life.

Alison Brie, 26, co-stars in “Community” as Annie, a sweet, “goodie two shoes” character. Brie, who is as “cute as a button,” previously had a recurring role as Trudy Campbell on AMC’s Mad Men.

In a recent interview with the website Pop Matters, Brie said that both she and her mother enjoyed seeing the retribution meted out to the Nazis by Jewish commandos in the historical fantasy film, Inglourious Basterds.”

Brie says: “I’m Jewish, well, my mother is, so I am by default, and even though she’s never been a real practicing Jew, she certainly is a proud Jew. I saw the film with her and I thought she might be horrified by all the violence but she turned to me after, I’m crying, and she’s got a big smile and says, “That movie was great!”

This Saturday, Dec. 12, marks the first night of Hanukkah. On Thursday, Dec. 17, at 8PM, NBC is airing a two-hour special, Saturday Night Live Christmas 2009. It’s a compilation show of the best holiday skits since the show began in 1974.

A list of the skits has not yet been announced, but I think it is very likely that two Hanukkah themed “classics” will be shown. The first is Adam Sandler’s “Chanukah Song.” Actually, Sandler appeared three times on SNL to sing three different versions of the song (about Jewish and half Jewish celebs). I suspect, however, only one of the three versions will air.

The other classic is “When Hanukkah Harry Saved Christmas.” This very funny sketch starred Jewish cast member Jon Lovitz in the title role. The basic plot: Santa gets sick on Christmas Eve and his Jewish friend, Harry, steps in to save Christmas for “all the little Gentile boys and girls” by delivering their Christmas presents. Harry “normally” just delivers Hanukkah presents to Jewish kids. (Harry, of course, is totally an invention of SNL).

Harry drives a flying cart pulled by three donkeys (who can also fly). The donkeys bear blankets with their names. Their names are also mentioned in the very funny “Harry” theme song played during the skit.

The NBC website posts both of Hanukkah Harry’s skits on SNL. The second one is entitled when “Hanukkah Harry Saved Easter.” It is posted in its entirety on the website.

In my opinion, the “Easter/Harry” sketch is a little funnier than the Christmas/Harry skit. You can view it, embedded, below. It includes the Harry theme song.