The Jewing of Ryan Braun

You could easily write a doctoral thesis on the sociological reasons why so many Jewish people, especially Jewish men, are fixated on Jewish athletes–finding out who is Jewish in the top athletic ranks and “claiming them.” 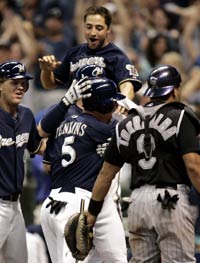 Ryan Braun (C, top) looks to run away with the National League Rookie of the Year Award. The third baseman is hitting .321, with 31 home runs, 85 RBIs and a .369 on-base percentage for the Milwaukee Brewers. REUTERS/Allen Fredrickson  (UNITED STATES)

The main reason, I believe, is that the existence of top-flight Jewish athletes is a counterpoint to the stereotype that Diaspora Jews have concentrated on the life of the mind to the exclusion of physical excellence. Jewish Diaspora athletes are the equivalent of the tough Israeli soldier so heralded in the Jewish press. An athlete is a far cry from the stereotypical bookworm “ghetto Jew” who got by on his wits rather than taking on the world of anti-Semites with his fists.

The reality is that Jews are not underrepresented as top rank athletes in terms of their percentage of the population. As a matter-of-fact, considerably more Jews have won Olympic medals than one would expect based on the world Jewish population.

Overall, however, Jews are certainly not as overrepresented in the top tier of athletics as they are in so many other prominent fields of endeavor. This fact alone makes top Jewish athletes “prized” among many American Jews.

Although Jews (including half-Jews) have won one quarter of the Nobel Prizes ever awarded to individuals, nobody is putting together a “card set” of Jewish Nobel Laureates. But a card set of every Jew who ever played major league baseball, put together by Martin Abramowitz, under the auspices of the American Jewish Historical Society, has been selling briskly for several years.

On May 25, outfielder Ryan Braun was called up from the minors to play for the Milwaukee Brewers. Born and raised in Southern California, Braun was drafted No. 5, overall in the 2005 draft. A great hitter, he hit the cover off the ball on the Brewers’ spring training squad, but was sent to the Triple-A Nashville Sounds to work on his rather weak fielding skills.

Braun’s fielding still isn’t great, but he has been tearing up the league with his bat since being called-up. He was named National League Rookie of the Month for June, with a .382 average, six homers, and a .716 slugging percentage. As I write this, his average has “slipped” to a mere .350 and he has 11 homers.

Braun’s father is Jewish and his mother is not Jewish. Although raised in no faith, he is clearly proud of his Jewish background as you can see in this recent interview with the The Wisconsin Jewish Chronicle.

My statement that Braun was raised in “no faith” was based on information I received from the editors of the Jewish Sports Review, the most reliable and authoritative source on the Jewish heritage of athletes. They had received this information from Braun’s college coach, who had got it from Braun, himself.

My piece was firmly grounded in the facts. Yes, I was “claiming” Braun, but nothing I wrote was based on information not from a good source.

But the word was out getting there in Internet land that a new Jewish athlete was on the scene. Already, Wikipedia, the user-created encyclopedia, was building a special “Jewish section” within Braun’s entry with a lot of information of dubious validity. (It still doesn’t mention that Braun’s mother is not Jewish).

Enter Irwin Cohen, a writer for The Jewish Press, a Brooklyn-based Jewish newspaper that primarily serves the Orthodox Jewish community. Cohen, in an Aug. 8 article entitled, “Greenberg to Green to Braun,” praises Braun as the heir to Jewish baseball great Hank Greenberg and N.Y. Mets outfielder Shawn Green. It appears Cohen’s only source is Wikipedia, for if he had bothered to do any some simple journalistic checking, he would have found out that Braun’s mother is not Jewish. Therefore, almost all of the readers of his newspaper, being Orthodox Jews, would not even consider Braun to be Jewish.

But Cohen didn’t check, and he probably didn’t want to check, because he wanted to “claim a Jewish athlete” and entertain his readers. Checking would mean confronting the real possibility that Braun was of interfaith background, something a lot of Orthodox Jews would simply not like to hear about.

Then, on Aug. 28, USA Today Sports Weekly had a profile of Ryan Braun. About his Jewish background, the profile says:

Diane [his mother] has a much stronger connection to the major leagues than to her job. She grew up in the home where Detroit Tigers slugger Hank Greenberg once lived.

There was a connection, too, considering Greenberg was Jewish and Braun is half-Jewish. Joe Braun was born in Tel Aviv, Israel, and came to the U.S.A. at age 7. Diane was raised Catholic in Van Nuys, Calif, Ryan was not raised Jewish and never had a bar mitzvah, but suddenly he’s hearing from Jewish organizations claiming him as their own.

“He’s totally not Jewish,” Diane says, “I heard some organization started called him, “The Hebrew Hammer.” I said, ‘Oh no.’ My mother would be rolling over in her grave if she heard that.”

“Ryan [Diane says] is proud that people want to claim him now, but where were they before? You know how that stuff works.”

I was concerned enough about Ryan’s mother’s comments to question whether I had got Ryan’s background right. I contacted the author of the Wisconsin Jewish Chronicle interview with Braun, Marty Nelles, who also writes for ESPN. He told me that Braun told him, as he wrote, that he was proud of his Jewish background.

Nelles said that it was his very clear impression that Ryan was not raised in any faith. Nelles told me that that Braun, understandably, was flattered by the attention from Jewish fans and Nelles thought, like I did, that Braun’s mother’s comments to USA Today Sports Weekly were “a bit over-the-top”. After all, what did she expect Jewish groups to do for her son before he hit the majors? (Not to mention the fact that the sports-obsessed have been “claiming” Braun since nearly the moment he was drafted.)

On Sept. 6, an article appeared on the JTA newswire by Martin Abramowitz titled Jewish Rookie Makes History: But Will He Sit Out on Yom Kippur? This article was republished in many Jewish papers.

Abramowitz sets out the drama in his first paragraph:

As baseball season heads into the home stretch and the High Holy Days approach Ryan Braun is supplying a double dose of suspense: Will the Milwaukee Brewers’ slugging third baseman become the first Jewish player to be named Rookie of the Year in either league? And does he plan to take a day off on Yom Kippur in the tradition of Hank Greenberg, Sandy Koufax and Shawn Green?

I respect Abramowitz for his hard work on the Jewish baseball card set, but this article was close to journalistic fraud. Marty knows Jews in baseball and he had to know that Braun’s mother is not Jewish–it says so in the Wisconsin Jewish Chronicle piece he cites. He knows the editors of Jewish Sports Review and could have got their insight on Braun’s religious background, as I did. He could have easily found my column item on this site.

Instead, Abramowitz doesn’t even tell his readers that Braun’s mother is not Jewish. He just “claims” Braun and sets up a false drama: how likely is it that Braun, who was raised in no faith, with one Jewish parent, would sit out on Yom Kippur?

Frankly, I was angered by this piece, as were other people I know. It only set up observant Jewish fans to be disappointed when Ryan Braun played on Yom Kippur, which, as this item goes to press, he says he will. However, if Jewish fans knew his background, they could still be proud of Ryan, while understanding “where he is coming from” in terms of Yom Kippur observance.

Last call: Yom Kippur, the Jewish holiday of the Day of Atonement, begins just before sundown on Sept. 21, and some wondered whether that meant Brewers third baseman Ryan Braun would sit out two games. He cleared it up on Friday. “I am half Jewish, and I am not Orthodox,” Braun said. “So I never grew up celebrating the holidays. I’m going to play.”