Lisa Kudrow is a Hollywood success story off camera as well as on screen. On July 22, the former Friends star returns for a new season of the Showtime comedy Web Therapy, and the celebrity genealogy series she co-produces, Who Do You Think You Are?, has moved to TLC (from NBC) for a new series of episodes that begin July 23. Kudrow, who is in an interfaith marriage, recently celebrated her 18th wedding anniversary, which is twice that in Hollywood years!

Kudrow, who is Jewish and had a bat mitzvah even though her family wasn’t particularly religious, married Frenchman Michael Stern in May 1995, and they’re raising their son Julian, now 15, Jewish. Three years ago on Who Do You Think You Are?, Kudrow traced her own Jewish roots to Belarus and sadly discovered that her paternal great-grandmother, Mera Mordejovich, had been slaughtered by the Nazis with 900 other Jews in her town.

This season on WDYTYA, one of the eight episodes focuses on comedian and writer Chelsea Handler (Chelsea Lately), who was raised in her father’s Reform Jewish faith though her German-born mother is Mormon. It’s the third episode, due to air August 6 at 9 p.m. ET/PT.

Actor James Franco, star of 127 Hours, Oz: The Great and Powerful and the recent apocalyptic comedy This is the End, has a background as varied as his roles: His father is of Portuguese and Swedish descent and Christian and his mother is Russian-Jewish (her family name was originally Verovitz, changed to Verne in the 1940s). Franco had a secular upbringing and said in an interview in The Guardian that he felt he “missed out on the Jewish experience.” Next up for the busy actor is Lovelace, in which he plays Playboy publisher Hugh Hefner opposite Amanda Seyfried in the title porn star role. It hits theaters August 8.

Los Angeles is the very definition of a melting pot, and its new mayor reflects that diversity in his ethnicity and religion. Eric Garcetti’s mother is of Russian-Jewish heritage, and his father’s ancestry is multi-ethnic: Mexican, Italian, Native American and Spanish. Neither parent practiced their religion, but their cultures were influential. “I always felt myself to be Jewish and Latino very comfortably,” Garcetti told L.A.’s Jewish Journal. “Weekends were both filled with bowls of menudo and lots of bagels.” 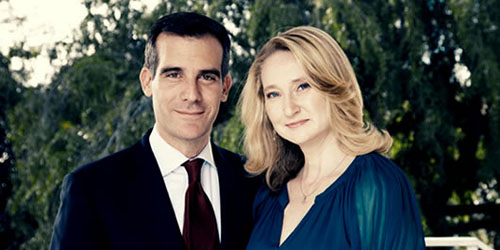 Garcetti celebrated Hanukkah and Passover and went to Jewish camp in his youth, and connected with Judaism even more at Columbia University. He now attends High Holy Days and occasional Shabbat services at a progressive synagogue. He’s carrying on the interfaith tradition in his own marriage—his wife Amy Wakeland is not Jewish.