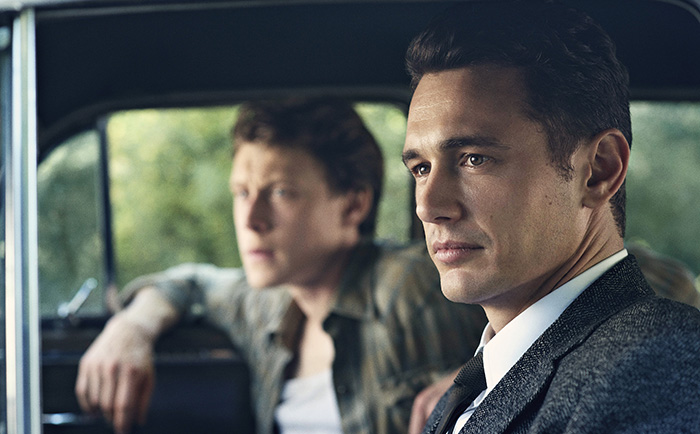 James Franco, who is Jewish on his mother’s side, wasn’t raised with much religion. But as he got older he thought he’d missed out and decided to have a bar mitzvah last year. He now says he feels more connected to Judaism. His latest project is 11.22.63, a what-if fantasy based on a Stephen King novel about a teacher who travels back in time to try to prevent Lee Harvey Oswald from killing President John F. Kennedy. The eight-part series begins streaming on Hulu February 15. Franco is also on the big screen in Yosemite, an indie drama he produced based on his short stories about boyhood, growing up and loss, set in Palo Alto, CA, in 1985.

Ben Stiller is both the product of an interfaith marriage (his Jewish dad is actor Jerry Stiller, his Catholic-raised, Jewish-converted mom was actress Anne Meara) and is in one himself (with actress Christine Taylor). He’s back as male supermodel Derek Zoolander in Zoolander No. 2, the highly anticipated sequel that he also directed. Owen Wilson, Will Ferrell, Benedict Cumberbatch and Penelope Cruz co-star in the comedy, as does Christine Taylor. It’s in theaters February 12.

Scarlett Johansson, who is Jewish on her mother’s side and is in an interfaith marriage with French journalist Romain Dauriac, is in the Coen Brothers’ 1950s inside-Hollywood comedy Hail, Caesar! She plays an Esther Williams-like aquatic movie star who gets pregnant, much to the movie studio’s chagrin. George Clooney plays a kidnapped movie idol, Channing Tatum is a song-and-dance man and Josh Brolin is the‘fixer’ called upon to handle the myriad behind-the-scenes crises.

Jason Silva, the charismatic Venezuelan-born host of National Geographic Channel’s interactive science series Brain Games, was raised in his mother’s Jewish faith (his father is not Jewish). “I was bar mitzvah[ed], but we were very secular,” he says. Single, he says religion isn’t a factor to him in relationships, but he’s currently dating a Jewish woman from Israel. He went to Israel recently to film the second episode of this fifth season of Brain Games, which is called The God Brain and investigates “what is going on in your brain when you feel connected to the divine.” The series returns February 14 with an episode about mapping the brain that was shot in London.