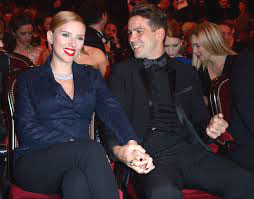 It’s a double blessing for Scarlett Johansson who gave birth to daughter Rose Dorothy in September, and has been secretly married to fiancé Romain Dauriac, a French journalist, since October 1. Johansson is Jewish on her mother’s side. No word on whether the very private Montana wedding was an interfaith ceremony, but mazel tov in any case!

Ben is Back with Sequels

Ben Stiller returns to the screen December 19 in the third installment in the Night at the Museum series, this one titled Secret of the Tomb. Stiller’s mother Ann Meara was raised Catholic but converted to Judaism after marrying Jerry Stiller. The actor-director-producer, who’s in an interfaith marriage with actress Christine Taylor, is producing two series for Comedy Central and considering another sequel, Zoolander 2.

At this time of year, interfaith couples have to decide how to celebrate the holidays. But after 26 years of marriage, Michael J. Fox and Tracy Pollan have it all figured out. The couple, who met on the set of Family Ties when she played his love interest and now have four children together, celebrate both his Christian and her Jewish traditions.

“Rosh Hashanah, Yom Kippur and Hanukkah have a much more central place in our observations, but we still celebrate Christmas,” Fox said recently. “That’s the beauty of having a blended family. My kids have grown up with every holiday.”

“For Hanukkah we light the candles every night,” added Pollan. “At Christmas we always have a huge tree and we do the trimming. We have two huge boxes of decorations that we’ve had since before the kids were born.” In alternate years, they make Christmas visits to his family in Canada and Hanukkah visits to hers in Connecticut.

Fox, who plays a recurring role on The Good Wife, makes a cameo appearance as himself in the musical movie Annie, opening Christmas Day.

In one of the more outrageous movie premises we’ve heard in a while, two American tabloid TV journalists score an interview with North Korean leader Kim Jong-un and are conscripted by the CIA to assassinate him. In fact, the film is so outrageous that we understand the release has now been cancelled due to the recent cyber attack on Sony by North Korea in retaliation for the film’s planned release. Theaters that planned to show the film were threatened, and in a statement on Dec. 17, Sony said, “In light of the decision by the majority of our exhibitors not to show the film The Interview, we have decided not to move forward with the planned December 25 theatrical release. We respect and understand our partners’ decision and, of course, completely share their paramount interest in the safety of employees and theater-goers.”

In the hands of James Franco and Seth Rogen, The Interview looked like a hilarious film. The movie reunites Franco who is from an interfaith family (Jewish mother, Christian father) and identifies as Jewish, with Jewish pals Rogen and Lizzy Caplan (Masters of Sex), who plays a CIA agent. The trio first starred together in Freaks and Geeks back in 1999. This film, however, is one of no less than 18 projects Franco has in various stages of completion for 2015 and beyond, so we’re confident he has enough work to keep him busy for awhile.

Jason Schwartzman, son of a Catholic mother (actress Talia Shire) and Jewish father (the late producer Jack Schwartzman), plays an art gallery owner in the movie Big Eyes, based on the true story of painter Margaret Keane (Amy Adams), whose husband (Christoph Waltz) took all the credit for her paintings of enormous-eyed waifs. The Tim Burton-directed film opens Christmas Day. 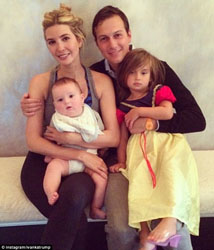 The Celebrity Apprentice returns to NBC for its seventh season on January 4, with Ivanka Trump once again serving as an advisor to her real estate mogul father, Donald Trump. In addition to her role as Executive VP in her dad’s company, she’s a jewelry, shoe and handbag designer, and a working mom to 2-year-old Arabella Rose and 1-year-old Joseph Frederick. Trump was raised Christian but converted to Judaism before marrying businessman and publisher Jared Kushner in 2009.

Julianne Moore gives a heart wrenching, Oscar-worthy performance as a woman with early-onset Alzheimer’s disease in the terrific drama Still Alice, now open in New York and Los Angeles and opening elsewhere January 16 with a stellar cast that also includes Alec Baldwin, Kristen Stewart and Kate Bosworth. Moore is married to and has two children with Jewish director Bart Freundlich, but the couple is not religious. A family friend officiated at their 2003 wedding.