A version of this article was previously published on Cheap Beets.

“Let me tell you about this ‘$8 salad’ I made,” has been sister-speak with Sylvie and me for years. I asked her this week how long we’d been using that term, and we realized that those were long-distance calls we were making to talk about our salads. 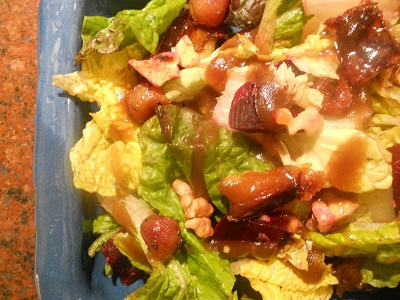 (I know, I can almost taste the irony.) This was before everyone could take photos with their phones, or post it to Facebook. Heck there was no Facebook, and people rarely had cellphones. These were landline phone calls. And even the price of the salad is an indication of how long ago it was. The idea of a salad costing $8 gave us pause and sounded as absurd as a year of private college costing $55,000 a year, or paying a babysitter $20 for an hour of work.

And last week, when I made this $8 salad, I almost took a photo on my new Android phone and sent it to her, Facebook, and the Twitter universe. But I stopped myself and decided to share this salad with you for Tu Bishvat which is Saturday, January 26 this year.

It is quite common for people to hold a Tu Bishvat seder, which is kind of like the seder we have on Passover, but not exactly. Sure, there four cups of wine drunk at both, but a Tu Bishvat seder is kabbalistic in nature, meaning it’s mystical in its origins and philosophy. (Although I honestly don’t know if Madonna goes to a Tu Bishvat seder. She probably does, come to think of it.) At Passover we discuss God liberating us from being slaves in Egypt and the Exodus. We have a seder plate full of symbolic foods that help us tell the story of our Exodus, and eat reclining as free people would. At Tu Bishvat we talk about God’s metaphoric relationship to the spiritual and physical worlds. And we try to eat the seven species of foods from Israel that the Bible praises: wheat, barley, figs, dates, pomegranates, olives, and grapes. Almonds are also commonly eaten as almond tree blossoms are a harbinger of spring, and since Tu Bishvat is the new year for the tree, it makes perfect sense. (Also, who doesn’t love marzipan or a nice piece of mandelbroit?)

Tu Bishvat is also the new year for the trees, and the seder usually touches on the ecological aspects of Judaism. The concept of ecology, Jewish thought and food will be explored much more deeply at the second Boston Jewish Food Conference which is being held on March 3 at Tufts Hillel.

This salad uses dates that have been sautéed in butter that I first read about here, although we discovered it makes much more sense to remove the pits before you sauté the dates. If you swap out the butter with a mild olive oil, you not only make this dish vegan, but you also end up using another one of the seven Tu Bishvat foods. The grapes are roasted with rosemary and balsamic vinegar, turning their acidic bite warm and mellow. I use walnuts, but if you’re deathly allergic to them like Sylvie is, it might be better to use almonds. Although I use a brown sugar balsamic dressing for this salad, my friend Sara whipped up a tangy pomegranate molasses dressing which would incorporate yet another species into the salad.

A Composed Salad for Tu Bishvat

While the walnuts are toasting, in a small bowl toss together the grapes, rosemary, balsamic vinegar and a glug of olive oil. Once the walnuts have finished toasting, raise the toaster oven to 400 degrees and bake the grape and rosemary concoction for approximately 20 minutes.

While the grapes are roasting, melt about a tablespoon of butter in a small pan over medium heat, slit open the dates and remove their pits. Add the dates to the pan. Cook for about 1 minute, then flip and cook the other side. They should get nicely caramelized. Remove from pan. Quarter the fruit on a cutting board. (I actually have a separate fruit cutting board so the taste of garlic or onions will never interfere with a sweet piece of fruit.)

Place the lettuce on a large platter, and assemble the beets, grapes, walnuts and dates on top.

Combine all ingredients. Give a shake and taste. Is it very puckery? Then add another half teaspoon of brown sugar. You want it to be a soft balsamic dressing with the acid cut by the sweet.

Molly Parr blogs about eating well during the recession (and more) at cheapbeets.wordpress.com Cheap Beets.

Molly Parr blogs about eating well during the recession (and more) at cheapbeets.wordpress.com Cheap Beets.